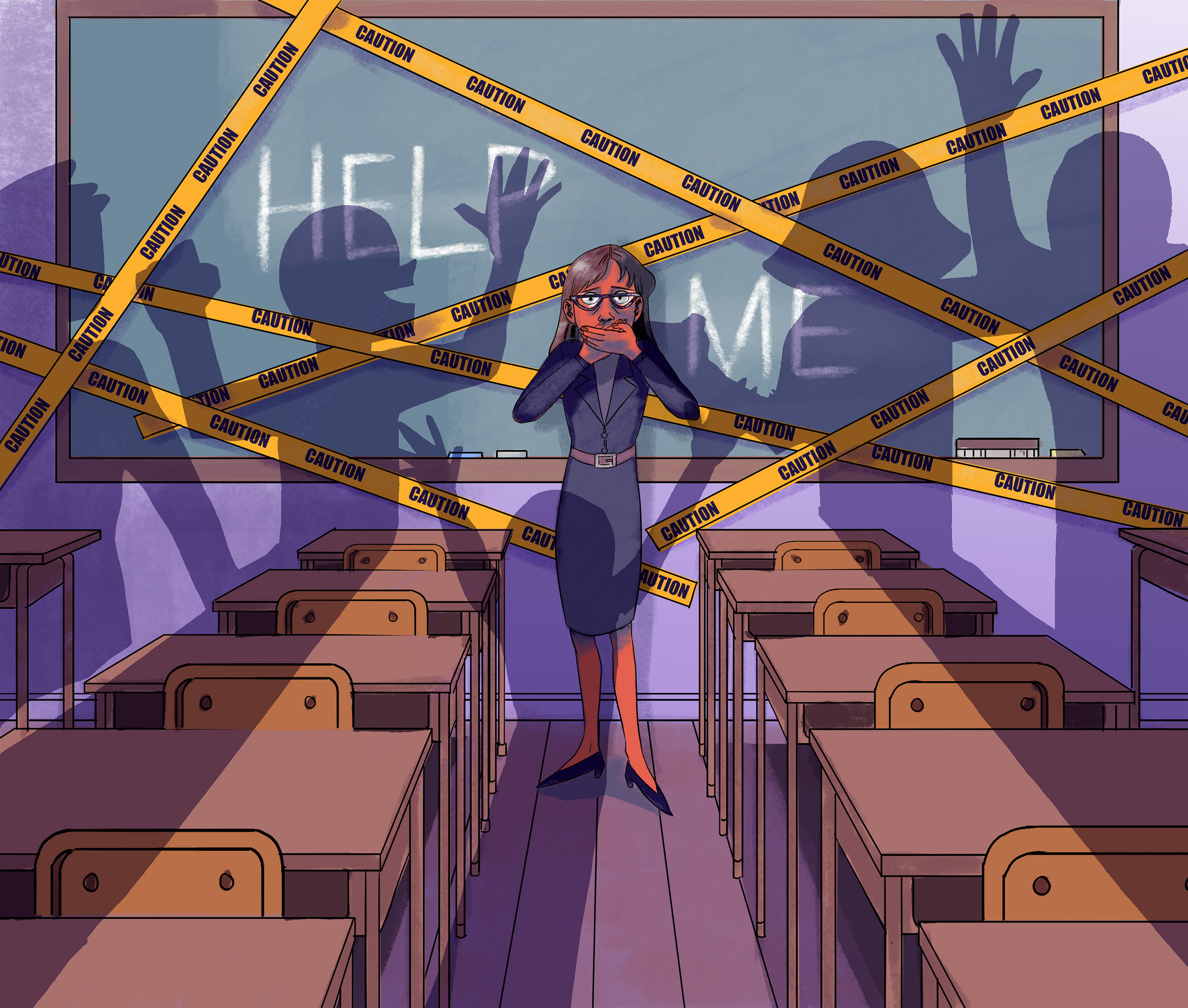 “Teachers should not feel that it’s normal to feel unsafe at school.”

Violence in schools is usually framed in relation to student-on-student bullying, but schools are also workplaces for (predominantly women) teachers and educational assistants: workers who are entitled to – but do not always experience – a safe and violence-free workplace. Over the last decade, unions representing education workers have mobilized to shed light on the “dirty little secret” of educator-directed violence, and the issue has received a measure of media attention. Surprisingly, however, while there are numerous studies examining peer-on-peer violence among students, the harassment and violence experienced by educators has received limited scholarly attention. Indeed, while research on bullying, harassment, and violence against students number in the thousands, we were able to locate less than ten studies on educator-directed harassment and violence in Canada.

To start to address this gap in the scholarly literature, we surveyed 1,688 Ontario English public elementary school educators (contract and occasional teachers, PSP/ESPs, ECEs/DECEs, and other educational professionals) in December 2018 about their experiences of workplace harassment (e.g. slurs, insults, and put-downs) and violence (i.e. acts, attempts, and threats of physical aggression) in the 2017-2018 school year. The Harassment and Violence against Educators (Ontario) Survey endeavoured to assess the frequency, impact, and response to harassment and violence against educators as well as to determine how experiences of, and the response to, harassment and violence are impacted by intersecting factors such as gender, dis/ability, and racialization.

Our full report, Facing the Facts: The escalating crisis of violence against educators, can be downloaded at www.educatorviolence.net. Below, we have summarized select key findings. 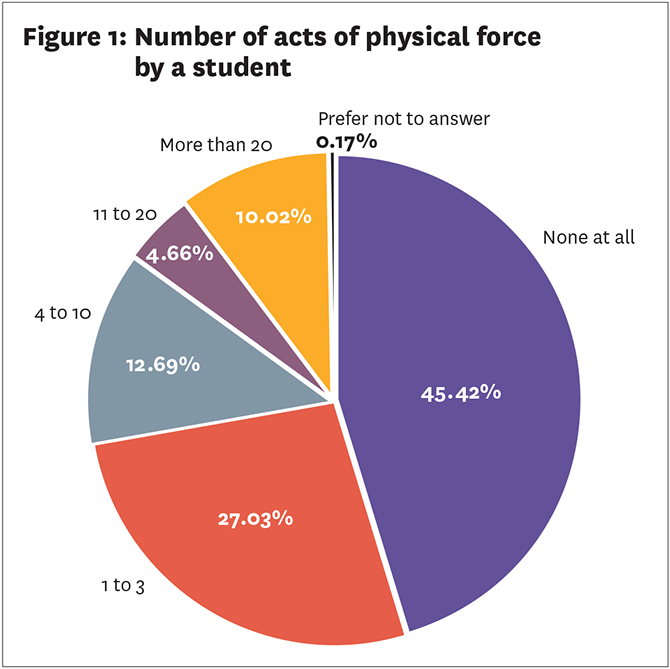 “I love teaching… However, the emotional and mental abuse that I have been subjected to on a daily basis, and the physical toll it has been taking on my body is unbelievable… I took a medical leave from work due to the stress and abuse. I learned that [my health issues] are due to a prolonged exposure to these conditions.” – Grade 2 French Immersion teacher

The 2017-2018 Harassment and Violence against Educators (Ontario) Survey provides stark evidence that educator-directed harassment and violence is escalating and quickly becoming a crisis. Indeed, rates of harassment and violence are critically high. In a single year, as many as one in two educators will experience violence and as many as 70% will experience harassment, whether from a student, parent, colleague, or administrator. Moreover, harassment and violence are increasing dramatically. Rates of harassment have at least doubled, and rates of physical violence have increased seven- to ten-fold over the last two decades. At the same time, we see a disturbing normalization of violence against educators by administrators, educators, and students operating in tandem with the widespread minimization and/or denial of its multifaceted impacts by administrators, school boards, and politicians. In addition, findings from the Harassment and Violence against Educators (Ontario) Survey indicate that workplace violence is being underreported, and when reported, is all too often accompanied by blame and reprisal. This suggests that official rates underestimate the true prevalence and speaks to an organizational culture that is ill-equipped to address the issue. In real terms, while school boards have embraced the language of progressive discipline mandated under the provincial Education Act, educators told us that, in practice, there are few consequences for students’ harassing and violent behaviour. Finally, findings from the current study suggest that many educators feel neither adequately supported nor prepared and trained to deal with the student-initiated harassment and violence that they are experiencing.

Rates of harassment have at least doubled and rates of physical violence have increased seven- to ten-fold over the last two decades.

The escalating crisis of educator-directed harassment and violence speaks to the compounding impact of structural, fiscal, and social factors. The past 20 years have seen significant changes in society, including growing income disparity, social inequality, and economic stress, a rise in both moderate and severe mental health difficulties among children,3 and the ubiquity of electronic devices, all of which have increased the needs of students. At the same time, we have seen significant shifts in provincial education policies, including a commitment to mainstreaming (placing students with complex needs in regular classrooms with correspondingly decreased use of segregated classrooms) institutionally structured “corrective and supportive” progressive discipline policies,4 and ministry-mandated “Learning for all”5 approaches based on the recognition that “all students learn best when instruction, resources, and the learning environment are well suited to their particular strengths, interests, needs, and stage of readiness.”6 To be successful, these evidence-based practices require significant investment in infrastructure, materials, professional development, and human resources. Unfortunately, as needs and expectations increase, funding formulas have not been recalibrated. Indeed, in Ontario, the impact of deep funding cuts introduced under the Mike Harris government (1995 to 2002) continues to echo.7 In classrooms across Canada, educators are scrambling to meet ever-expanding expectations – from more Individual Education Plans to increased class size to standardized testing requirements – with decreasing levels of support and resources. The result is entirely predictable – frustrated, struggling children whose needs are not being met are “lashing out.” 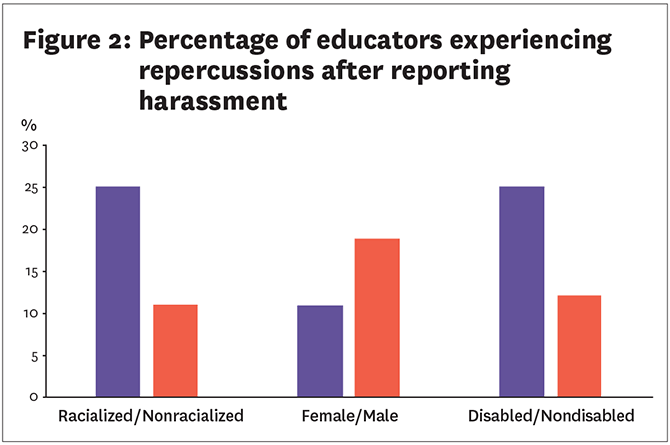 Addressing this significant problem will require a commitment to immediate action, including:

The workplace violence educators experience has significant and far-reaching costs. It impacts educators’ health, well-being, careers, ability to do their jobs, and relationships. In real terms, the violence reverberates through their personal and professional lives and in turn though the lives of their families, their colleagues, and the students they teach – creating ever more ripples that impact other families and indeed the broader community and society. The impacts also ripple over time – we can only imagine how the casual normalization of violence against (predominantly women) educators is shaping the perceptions and expectations of a generation of students.

2 The financial costs associated with days of work following an incident of harassment and violence were calculated in the following manner. Assuming a conservative rate of violence or harassment that would require time off work, of say just 10% (which is less than one fifth of the rate reported in this survey), then it can be expected that some 8,000 educators would have taken time off work at the time that the survey was conducted. If 25% of those 8,000 educators took the average number of 6.84 days off work, the average cost of replacing these educators in the classroom would be $1,652.31 each, amounting to over 3 million dollars annually. It is important to keep in mind that this estimates a very low rate of exposure to harassment and violence and estimates only the replacement costs associated with a single incident of harassment (and not violence) in any given year. It is important to keep in mind that educators in this survey reported multiple instances of violence and harassment in a single year.

3 A. Boak, H. A Hamilton, et al., The Mental Health and Well-being of Ontario Students, 1991-2017: Detailed findings from the Ontario Student Drug Use and Health Survey – CAMH Research Document Series No. 47 (Toronto, ON: Centre for Addiction and Mental Health, 2018).

5 Ontario Ministry of Education, Learning for All: A guide to effective assessment and instruction for all students, Kindergarten to Grade 12 (2013). www.edu.gov.on.ca/eng/general/elemsec/speced/LearningforAll2013.pdf

6 Ontario Ministry of Education, Learning for All: 8.

Professor of Psychology, University of Ottawa and Clinical Psychologist

Darcy Santor, PhD, is a practicing clinical psychologist and Professor of Psychology at the University of Ottawa. He has a long-standing interest in mental health in young people and in school-based mental health.

Chris Bruckert, PhD, is Professor of Criminology at the University of Ottawa. She has been conducting research on, teaching about, and mobilizing against gendered violence for over 25 years.