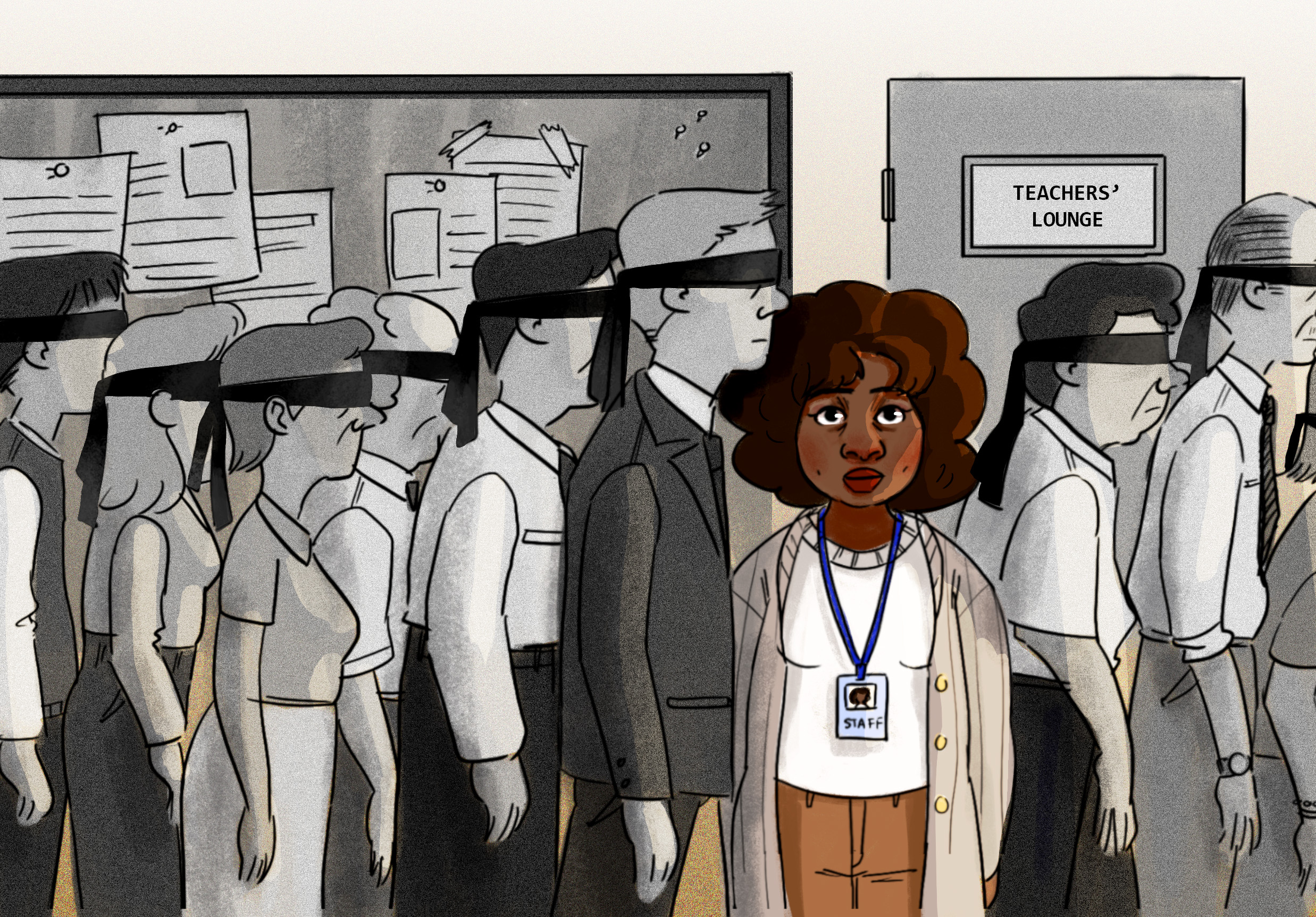 Students have been subject to some of the most egregious and gross forms of racism that no one should ever experience, much less a child. In Ontario, two fairly recent examples of racist violence that students face have been documented in the Dufferin-Peel Catholic District School Board and the Peel District School Board. On June 15, 2020, the CBC reported that Anne Stewart,1 a teacher at Notre Dame Secondary School in Brampton, Ontario, used the N-word in class while teaching students. Stewart was reported to the Ontario College of Teachers (OCT), which concluded that the teacher had indeed used the N-word. However, Stewart only received a verbal reprimand and her case was not sent to the OCT’s discipline committee. The second case worth mentioning happened in 2016, when staff at an elementary school in the Peel District School Board called in the Peel Regional Police to address a situation where a six-year-old Black female student was in mental distress. The two white officers who arrived proceeded to shackle the hands and feet2 of the little girl. She remained shackled and placed on her stomach for 28 minutes. The case was referred to the Human Rights Tribunal of Ontario and, in 2020, the Tribunal ruled that the girl’s human rights were violated and that race was a factor in the way the police responded.

What we must understand is that both of these cases were traumatizing events for the students involved; they will likely require mental health support for a long time as a result of the racial trauma they experienced. The same can probably be said about the many students who have also come to be aware of too many of these stories in which Black and racialized students, friends and family, experience racist violence in the school system. Students and their families are also re-traumatized when they find out that those who committed these racist acts are rarely held accountable for their actions.

Since school districts are in the business of serving students, we can understand why we need to address these issues so that students can have the opportunity to be successful and not be under the threat of racial violence when they are expected to be learning and getting an education. But there’s another part to this conversation that often does not get the attention it deserves: the racism that Black, Indigenous and racialized staff experience in school districts across the country. The system of anti-Black racism that Black students are fighting against and resisting is the same anti-Black racism that Black staff have to contend with and navigate while they are expected to be teaching at a high level. A report titled The Voices of Ontario Black Educators, covered by the Toronto Star in 2015,3 stated that one-third of the Black teachers, principals and vice-principals who participated in the study indicated they were passed over for promotions because they were Black, 27 percent indicated that racism at work impacts their day-to-day work life, and 51 percent believed anti-Black racism impacts who gets promoted.

School districts that want to take up the work of dismantling systemic racism to enhance student success and address the disparity in student outcomes must also address and dismantle the racism that Black and racialized educators are experiencing in the K-12 workplace. This can only be done by taking a comprehensive approach to staff mental health and well-being, and by drawing the connection between systemic racism, racism and anti-Black racism in the workplace and well-being in the workplace. The premise of this discussion must be that our education system, and by extension our school districts, are all inherently racist and anti-Black. The conversation should not be about, “Is racism operating in our school district?” The evidence and research detailing a variety of ways that racism and anti-Black racism impacts the education system is too strong and comprehensive for us to still be looking for more proof to establish its existence. The conversation must be about, “How we can gain a better understanding of how racism is operating in our sector or school district so that we can address the disparities that Black and racialized staff are experiencing?”

It is important to note that although all racialized groups experience racism, not all racialized groups experience racism in the same way. When we examine outcome data, what we clearly see is that anti-Black racism and anti-Indigenous racism, across all sectors, produce the most significant negative outcomes among non-white populations. Disaggregated race-based outcome data is what should drive where and how school districts focus their attention and resources when doing anti-racism work. Anti-Black racism and systemic racism is a deeply entrenched problem in the education sector across the country, which has roots in the legacy of enslaved people in Canada.4 This is a very important point, because it is through a comprehensive understanding of colonialism and Canada’s participation and relationship with the trans-Atlantic slave trade, that you will understand how all of our major institutions, laws, social norms and such have been built on this foundation and reflected in present-day realities. However, as serious as the problem is, it is not readily understood in terms of its impact on stress, anxiety, trauma and overall well-being in the workplace. If school districts are serious about addressing anti-Black racism and systemic racism, then they must see it as one of the most pressing mental health challenges of our time that requires concentrated effort, attention and resources if our schools, classrooms and workplaces are to be safe and nurturing work and learning environments.

Research indicates that teacher stress is directly linked to student performance and effective class management strategies. Teachers who are under chronic stress have been shown to have less effective classroom management,5 lack clear teaching instruction for students and have a lower ability to create safe and nurturing classrooms for all of their students. Research also shows that teachers who view and experience the demands and stress of teaching as outweighing the resources and support provided to them, are less likely than their peers with lower levels of stress to say they would still choose teaching if they had the chance to choose their career again.

Now, imagine you layer the stress and anxiety that comes with managing a classroom with the stress, anxiety and trauma caused by anti-Black racism and systemic racism that Black and racialized educators experience in the workplace. Racial violence can lead to racial trauma. Dr. Erangler Turner defines racial trauma as “experiencing symptoms such as anxiety, hyper-vigilance to threat or lack of hopefulness for your future as a result of exposure to racism or discrimination.” The impact of racial trauma shows up not only as anxiety and stress but also as depression, low self-esteem, poor concentration and irritability.6 Research on racial trauma also indicates that as a result of anti-Black racism, Black people experience less sense of control over their own lives, as well as internalized racism and avoidance of valued action. Chronic stress related to anti-Black racism predisposes Black people to a variety of health problems, including memory impairment, neural atrophy and heart disease. Some research has also pointed out that anxiety can be more persistent among Black people compared to their non-Black counterparts, which researchers attribute to the intensity of anti-Black racism. The impact of anti-Black racism and racism in the workplace also has negative physical impacts on Black and racialized staff. Most notable is that chronic and prolonged stress related to racism can lead the body to release high levels of cortisol, which can impair the body’s ability to reduce inflammation. This in turn can impair the body’s ability to heal. This is what Black, Indigenous and racialized educators are having to contend with in the workplace, and much of these negative mental health and well-being outcomes are directly connected to school districts’ refusal to see racism as a mental health and well-being issue, along with their inability to effectively address racism for both staff and students.

Anti-racism is integral to staff well-being

Although many staff well-being initiatives have value and help to improve the mental health and well-being of educators, the fact is that the vast majority of these programs take a race-neutral approach. Racism tends to not be factored into program design, and this type of approach only serves to further entrench anti-Black racism and other forms of racism in the workplace. By making anti-racism work a central feature of mental health and well-being plans, school districts will be centering the voices of those most vulnerable in the system and keeping the conversation about racism in the workplace at the forefront. These are both seen as best practices when doing anti-racism work.

It is well established that better mental health leads to positive outcomes for organizations. When educators experience high levels of well-being and low levels of stress, this not only results in higher student well-being and educational outcomes, but it also improves:

If school districts are serious about staff well-being in the K-12 workplace and truly desire to have better student outcomes, then they must see anti-racism work as mental health and well-being work. School districts’ anti-racism work must include both staff and students. It is clear that when staff have lower stress and anxiety levels, they perform better as educators, which leads to better student outcomes. But workplace racism inflicts an additional level of stress, anxiety and racial trauma on Black, Indigenous and racialized staff. We know that racism and anti-Black racism has significant mental, emotional and physiological impacts on Black and other non-white educators in the workplace. This additional “tax” can and does lead to teacher performance being negatively impacted, which ultimately will impact student outcomes. Only a systemic approach to doing anti-racism work (that includes the needs of both students and staff, frames anti-racism work as a mental health and workplace well-being issue, and includes accountability) will turn our schools and districts into spaces where learning can happen and where Black and non-white staff can bring their whole selves to work – without having to shoulder the weight of systemic and anti-Black racism.

A comprehensive discussion of effective anti-racism programs for school districts would require a whole other article. But as a starting place, they should feature:

Rohan Thompson is the Workplace Equity Manager with the Peel District School Board in Ontario.