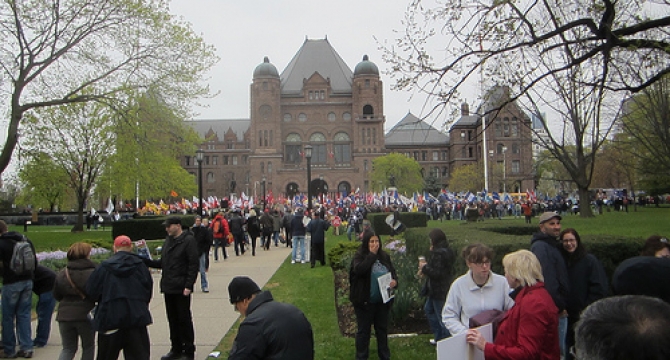 On McGuinty’s negotiation with teachers, the jury is still out – Globe and Mail

Scott Stinson: Ontario throws down the gauntlet, and more, at its teachers unions – National Post

Is this negotiation? – doug — off the record
The big news in Ontario Education today came to me via the Globe and Mail but media throughout the province was quick to report as well. It was a story announcing that the Provincial Government had reached an agreement with the Ontario English Catholic Teachers’ Association, OECTA.

The government pulled no punches earlier this spring when it announced its financial difficulties and flew ideas about how it was going to resolve them. It came as no surprise that it would be partially solved on the backs of the teachers of the province. Previously, the government had frozen principal salaries. I recall mentioning at the time that that wasn’t going to be enough; a salary freeze had to go much further than that and the biggest group of salaries in education belong to the teachers ...Read more

The first thing that jumps out at me as I read the terms of the deal struck between OECTA and the Ontario Ministry of Education: the importance of professional learning is not very highly regarded—by folks on either side of the bargaining table.

Not only has the province stepped back from its intent to maintain an annual grant to school boards that offered funding for additional professional learning opportunities for elementary teachers, but the 3 unpaid days that all OECTA members will be required to take during the 2013/14 school year are to be taken from the already limited number of PD days. The argument, of course, is that these are non-instructional days and, as a result, the direct impact on students will be minimized. Really?...Read more

Is bilingualism still relevant in Canada? – Globe and Mail

Confronting a Cliché – Stager-to-go
Just returned home from speaking at another large international conference where meaningless clichés filled the air and rolled off of people’s tongues. Aside from being boring, clichés oversimplify complex issues and distract us from making forward progress. Clichés are a tranquilizer that retard our thinking and decision-making. Clichés amplify the superficial and form of a vapor barrier around powerful ideas.

Sometimes, the clichés are not even true. Yet, they still manage to become a community standard.

The motivation behind uttering such banalities is likely positive. It acknowledges that children are competent and encourages adults to learn with them.

However, these clichés suggest a power relationship in which all adults (particularly teachers) are resigned to the role of bumbling TV dad while the kids rule the roost. In education, this often serves as a justification for why teachers irrationally fear computers and modernity or appear to have stopped learning…Read more