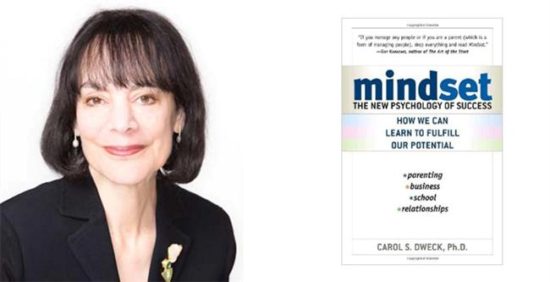 Developing a Growth Mindset in students and their teachers is perhaps the hottest trend in the education world outside of Canada. Originating in psychological science research conducted by Carol S. Dweck over thirty years of studies and continuing at Stanford University, it burst upon the education scene in 2006 with the publication of Dweck’s influential book, Mindset: The New Psychology of Success[1] and has become a favourite topic in education faculty classes and professional development sessions.

The so-called Mindset Revolution, like most education fads, has also generated its share of imitations and mutations. Two of the best known are the Mathematical Mindset, promulgated by Math educator Jo Boaler [2],and a more recent Canadian spin-off, The Innovator’s Mindset, the brain-child of George Couros, a division principal of Teaching and Learning with Parkland School District, in Stony Plain, Alberta. While Growth Mindset 1.0, got little traction among Canadian policy-makers, the second-generation iteration dreamed up by Couros is increasingly popular among tech-savvy Canadian and American educators.

Legions of professional educators and teachers in the U.S., the UK, and Australia, have latched onto Growth Mindset theory and practice with a real vengeance. One reliable barometer of ‘trendiness,’ the George Lucas Educational Foundation website, Edutopia, provides a steady stream of short online videos extolling the virtues of Growth Mindset (or GM) in the classroom. The growing list of GM e-zine pieces @Edutopia purport to “support students in believing that they can develop their talents and abilities through hard work, good strategies, and help from others.”

Figure 1: The Fixed Mindset and the Growth Mindset (Carol Dweck, 2006) 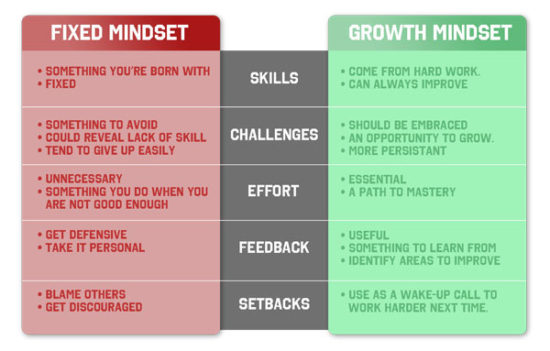 Dweck’s theory of the Growth Mindset gained credibility because, unlike most educational ‘fads,’ it did emerge out of some sound initial research into brain plasticity and was tested in case studies with students in the schools. Leading education researcher Dylan Wiliam, a renowned student assessment expert, lent his support to the Growth Mindset movement when he embraced Dweck’s findings and applied them to building ‘feedback’ into student assessment. He adopted this equation: Talent = Hard Work + Persistence (A Growth Mindset) and offered this endorsement: “The harder you work, the smarter you get. Once students begin to understand this “growth mindset” as Carol Dweck calls it, students are much more likely to embrace feedback from their teachers.”

For much of the past two years, Dweck and her research associate Susan Mackie have been alerting researchers and education policy-makers to the spread of what is termed a “false growth mindset”[3] in schools and classrooms in Australia as well as in the U.S. and the UK. Too many teachers and parents, they point out, have either misinterpreted or debased the whole concept, reducing it to simple axioms like “Praise the effort, not the child (or the outcome).” In most cases, it’s educational progressives, or parents, looking for alternatives to “drilling with standardized tests.”

Dweck’s greatest fear nowadays is that Growth Mindset has been appropriated by education professionals to reinforce existing student-centred practices and to suit their own purposes. That serious concern is worth repeating:“It’s the fear that the mindset concepts, which grew up to counter the failed self-esteem movement, will be used to perpetuate that movement.” In a December 2016 article in The Atlantic, she conceded that it was being used in precisely that way, in too many classrooms, and it amounted to “blanketing everyone with praise, whether deserved or not.”[4]

A “false growth mindset” arises, according to Dweck, when educators use the term too liberally and simply do not really understand that it’s intended to motivate students to work harder and demonstrate more resilience in overcoming setbacks. “The growth mindset was intended to help close achievement gaps, not hide them,” she reminds us. “It is about telling the truth about a student’s current achievement and then, together, doing something about it, helping him or her become smarter. “Far too many growth mindset disciples, Dweck now recognizes,reverted to praising students rather than taking “the long and difficult journey” in the learning process and showing “how hard work, good strategies, and good use of resources lead to better learning.”

The Canadian mutation, George Couros’ The Innovator’s Mindset [5] seeks to extend Dweck’s original theory into the domain of technology and creativity. Troubled by the limitations of her model and its explicit emphasis on mastery of knowledge and skills, he made an “awesome” (his word) discovery that GM could be a powerful leadership tool for advancing “continuous creation.” In his mutation of the theory, the binary “fixed” vs. “growth” model morphs into a more advanced stage, termed the “innovator’s mindset.” In his fertile and creative mind, it is transmogrified (transformed almost beyond recognition) into a new theory of teaching and learning.

Figure 2: The Innovator’s Mindset (George Couros, The Principal of Change, 2017) 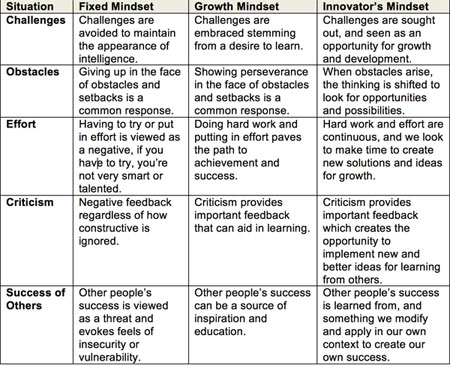 “As we look at how we see and “do” school, it is important to continuously shift to moving from consumption to creation, engagement to empowerment, and observation to application. It is not that the first replaces the latter, but that we are not settling for the former. A mindset that is simply open to “growth”, will not be enough in a world that is asking for continuous creation of not only products, but ideas.”

Promising educational theories – even those founded on some robust initial research – can fall prey to prominent educators pushing their own ‘pet ideas’ and pedagogical theories. A 2016 Education Week report[7] demonstrates that Growth Mindset initiatives can produce mixed results and British education researchers are currently having a field day picking apart Carol Dweck’s research findings[8]. Having another version of her creation circulating in mutated form will make it even harder to assess her serious case studies being replicated around the world.

That Moment of Trust