She arrived last week, in the midst of freezing rain, school closures and the last minute preparations that normally precede a busy Easter weekend. I had been waiting for this day since I first met her in January, and the anticipation that had been building was close to being resolved. Or at least that’s what I thought.

She arrived last week, in the midst of freezing rain, school closures and the last minute preparations that normally precede a busy Easter weekend. I had been waiting for this day since I first met her in January, and the anticipation that had been building was close to being resolved. Or at least that’s what I thought.

There were so many things that felt right about the decision to buy a new piano. The instrument that I had purchased some 25 years earlier was in need of some major work and, even with a substantial investment of time and money, I may still be disappointed with the results. The Young Chang had served me well, but it was no longer drawing me to spend the same amount of time playing as it once did.

So, when Jeremy Giesbrecht, my piano technician (and new friend) reluctantly told me of the 100 year-old 6′ 9″ Heintzman Grand that he had purchased from a Toronto hotel a few years ago, my eyes immediately lit up. I had learned to play on my grandmother’s Heintzman upright and I was aware of the care and workmanship that went into producing these pianos in the early 20th century. When I went to play the instrument the next day, I was immediately taken by the quality of sound, the instrument’s responsiveness and the way it “sang” in his townhouse living room.

It didn’t take me more than 10 minutes to fall in love! (My mother would tell you that this is not unusual for me.)

“Why are you selling this?” I asked after playing it for a few minutes.

“Not sure,” he admitted. “But this feels right.” It’s always a nice to know that someone else appreciates something as much as you do.

So, I went home and immediately started to prepare the space which would become home for my new musical companion. My Young Chang sold within two days of it being listed. Carpet was replaced with hardwood flooring. Extra “stuff” was cleared out of the room in order to allow the majestic old girl to hold court in style.

And then last Thursday, after weeks of waiting, she was carried to her new home by the very same movers that moved my first piano some 48 years ago.

It took less than 30 minutes to get her positioned and comfortable in her new space. And then, once everything was settled and I was alone, I sat down to play.

To say that I was surprised by the sound would be an understatement. I was shocked! The opening notes of Chopin’s Nocturne in E Flat were way too bright and difficult to control. The rippling notes from the middle section of Claire de Lune were loud and confusing. And I won’t even mention my six year-old’s rendition of Darth Vader’s March from Star Wars.

Sitting at the piano, I wondered how this could be. How is it possible that an instrument that struck me as being so beautifully responsive two months ago, now be so loud, brash and somewhat unpredictable?

Other than the need for a good solid tuning, what else had changed? Well, as it turns out, more than I would have imagined.

For one thing, in removing the carpet and clearing out the physical space, I had unknowingly created a totally different context for the piano. Quite literally, sound was bouncing everywhere. There wasn’t anything in the room that would help to absorb any of the notes of the Nocturne. Perhaps a carpet under the piano or a couple of wall hangings might make a difference in how it resonated.

I also learned that there are several things that could be done to the instrument itself in order to change the way it sounds. Voicing techniques designed to allow the piano to “sing” properly in her new space is another consideration and, in this case, a strong recommendation. In fact, voicing is just the beginning of some of the ways to bring out the best in the instrument.

But then there is also the musician. For a quarter of a century, I have played a 5′ 2″ Young Chang Baby Grand. A good deal of my style, my musical proficiency (or lack thereof) and my ear have been tuned to that particular instrument. But now, sitting at a much different piano, there is a certain sense in which I would need to learn to play differently—much differently. Both my touch and my technique would need to be realigned so that I could respond to the character, personality and wisdom of this grand old lady.

This will, indeed, be a journey and I look forward to working alongside Jeremy to learn how to bring my new musical companion to life in this new space.

You might not be surprised when I tell you that it didn’t take long for me to start thinking about the ways in which this experience might hold some metaphorical power for my life as an educator. In fact, I’ve been thinking about the connections for several days now.

But I will leave those connections in favour of one simple thought.

For the past few weeks, I’ve been exploring the idea of risk in education. And, in a strong sense, my recent piano experience has underscored the risk that exists everytime we choose to enter into the complexity of things. There are so many factors that combine to create the context into which we are immersed everyday. To assume that we can control all of those factors or, for that matter, even identify all of them is actually part of the risk. It’s a risk that is created by both what we know and what we have yet to learn. That’s the mystery.

But we do know—almost intuitively— that with a good understanding of how space, instrument and musician influence each other, the results will always far outweigh the risk. 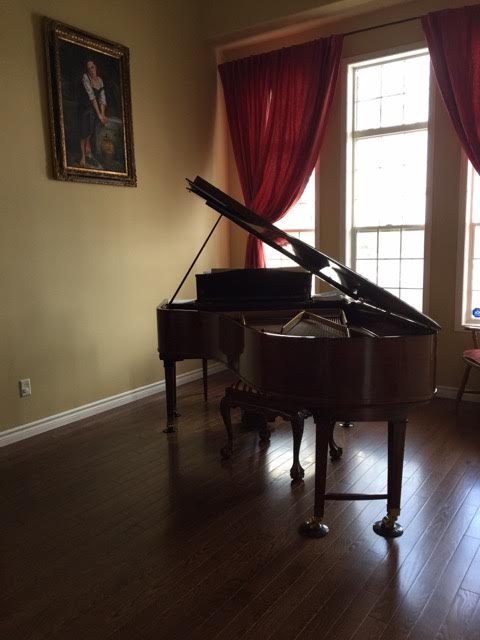