Quebec students finish at the head of the class when it comes to mathematics. On the Pan-Canadian Assessment Program (PCAP) tests of Grade 8 students, written in June 2016 and released in early May 2018, it happened once again.1 Students from Quebec finished first in Mathematics (541), 40 points above the Canadian mean score and a gain of 26 points over the past six years.

Quebec’s position as our national leader in mathematics achievement has solidified on every comparative test over the past 30 years. How and why Quebec students continue to dominate and, in effect, pull up Canada’s international math rankings deserves far more public discussion. Every time math results are announced, it generates a flurry of interest, but relatively little in-depth analysis of the contributing factors.

Since the first International Assessment of Educational Progress (IAEP) back in 1988, and in the next four national and international mathematics tests up to 2000, Quebec’s students generally outperformed students from other Canadian provinces at Grades 4, 8 and 11.2 That pattern has continued right up to the present and was demonstrated impressively on the most recent Program of International Student Assessment (PISA 2015), where Quebec 15-year-olds scored 544, ranking among the top countries in the world.

One enterprising venture, launched in 2000 by the B.C. Ministry of Education under Deputy Minister Charles Ungerleider, did tackle the question by comparing British Columbia’s and Quebec’s mathematics curricula. That comparative research project identified significant curricular differences between the two provinces, but the resulting B.C. reform initiative ran aground on what University of Victoria researchers Helen Raptis and Laurie Baxter aptly described as the “jagged shores of top-down educational reform.”3

The reasons for Quebec dominance in K-12 mathematics performance are coming into sharper relief. The initial B.C. Ministry of Education research project exposed and explained the curricular and pedagogical factors, but subject specialists, including both university mathematics specialists and mathematics education professors, have gradually filled in the missing pieces. Mathematics education faculty with experience in Quebec and elsewhere help to complete the picture. 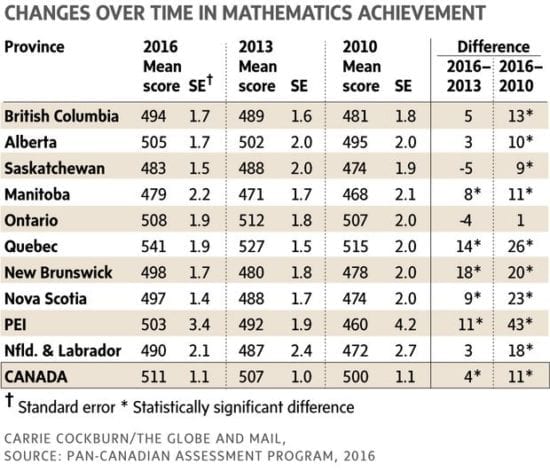 Five major factors can now be identified to explain why Quebec students continue to lead the pack in pan-Canadian mathematics achievement:

The scope and sequence of the math curriculum is clearer, demonstrating an acceptance of the need for integration and progression of skills. “The way math is presented makes the difference,”4 says Genevieve Boulet, a Mathematics Education professor at Mount St. Vincent University who has prior experience preparing mathematics teachers at Quebec’s University of Sherbrooke.

The Quebec Ministry of Education curriculum, adopted in 1980, set the pattern. In teacher education and in the classroom, much more emphasis was placed upon building sound foundations before progressing to problem solving. Quebec’s Grade 4 objectives made explicit reference to the ability to develop speed and accuracy in mental and written calculation and to multiply larger numbers as well as to perform reverse operations. Curriculum guidelines emphasize subject mastery, particularly in algebra, and tend, in Grade 11, to be more explicit about making connections with previously learned material.

Fewer topics tend to be covered at each grade level, but in more depth than in B.C. and other Canadian provinces. In Grade 4, students are generally introduced, right away, to numbers/operations and the curriculum unit on measurement focuses on mastering three topics – length, area, and volume – instead of a smattering of six or seven topics. Secondary school in Quebec begins in Grade 7 (secondaire I) and ends in Grade 11 (secondaire V) and, given the organizational model, that means students are more likely to be taught by mathematics subject specialists. Senior mathematics courses, such as Mathematics 536 (Advanced), Mathematics 526 (Transitional) and Mathematics 514 (Basic), were once explicitly  focused on “cognitive growth and the development of basic skills,”  covering a range of topics at different depths.5 Recent curriculum changes, instituted in 2017 under the “Diversified Basic Education” program, presented the renamed courses as three streams, each preparing students for different pathways, aligned with post-secondary CGEP programs.  The revised Quebec Program of Study  cast Mathematics within a broader “Areas of Learning” model, but the prescribed knowledge and provincial examination questions remained consistent with past practice.6

Teacher preparation programs in Quebec universities are four years long, providing students with double the amount of time to master mathematics as part of their teaching repertoire – a particular advantage for elementary teachers. In Quebec faculties of education, prospective elementary school math teachers must take as many as 225 hours of university courses in math education; in other provinces, they receive as little as 39 hours.7

Teacher-guided or didactic instruction has been one of the Quebec teaching program’s strengths. Annie Savard, a McGill University education professor, points out that Quebec teachers have a clearer understanding of “didactic” instruction, a concept championed in France and French-speaking countries.8 They are taught to differentiate between teaching and learning. “Knowing the content of the course isn’t enough,” Savard says. “You need what we call didactic [teaching]. You need to unpack the content to make it accessible to students.” Four-year programs afford education professors more time to expose teacher candidates to the latest research on cognitive psychology, which challenges the efficacy of child-led exploratory approaches to the subject.9

Students in Quebec still write provincial examinations and achieving a pass in mathematics is a requirement to secure a graduation (Secondaire V) diploma. Back in 1992, Quebec mathematics examinations were a core component of a very extensive set of ministry examinations, numbering two dozen, and administered in Grades 9 (Sec III), 10 (Sec IV), and 11 (Sec V). Since 2011-12, most Canadian provinces, except Quebec, have moved to either eliminate Grade 12 graduation examinations, reduce their weighting, or make them optional. In the case of B.C., the Grade 12 provincial was cancelled in 2012-13 and in Alberta the equivalent examination now carries a much-reduced weighting in final grades. In June of 2018, Quebec continued to hold final provincial exams, albeit fewer and more limited to Mathematics and the two official languages. Retaining exams has a way of keeping students focused to the end of the year; removing them has been linked to both grade inflation and the lowering of standards.10

Academic achievement in mathematics has remained a system-wide priority and, despite recent initiatives to improve graduation rates, there is much less emphasis in Quebec on pushing every student through to high school graduation. From 1980 to the early 2000s, the Quebec mathematics curricula was explicitly designed to prepare students for mastery of the subject, either to “prepare for further study” or to instill a “mathematical way of thinking” – reflecting the focus on subject matter. The comparable B.C. curriculum for 1987, for example, stated that mathematics was aimed at enabling students to “function in the workplace.” Already, by the 1980s, the teaching of B.C. mathematics was seen to encompass sound reasoning, problem-solving ability, communications skills, and the use of technology.11 This curriculum fragmentation never really came to dominate the Quebec secondary mathematics program.

Quebec’s education system remains that of “a province unlike the others.” Since the first IAEP study on the achievement of 13-year-olds, ministry officials have been keenly aware that the three provinces with the best student results, Quebec, Alberta and B.C., all had the lowest graduation rates. Raising the passing grade from 50 to 60 across Quebec in 1986-87 had a direct impact upon high school completion rates. But student achievement indicators, particularly in mathematics, still drove education policy and, until recently, unlike other provinces, student preparedness remained a higher priority than raising graduation rates.12

SCHOOL SYSTEMS are, after all, products of the societies in which they reside. While Canadian provinces outside Quebec are greatly influenced by North American pedagogy and curricula, Quebec schooling is the creature of a largely French educational milieu.13 Teaching philosophy, methods and curriculum continues to be driven more by the French tradition, exemplified in mastery of subject knowledge, didactic pedagogy, and a uniquely different conception of student intellectual development. Socio-historical factors weigh far more heavily than is recognized in explaining why Quebec continues to set the pace in Mathematics achievement.

3 Helen Raptis and Laurie Baxter, “Analysis of an abandoned Reform Initiative: The case of Mathematics in British Columbia,” Canadian Journal of Educational Administration and Policy 49 (January 26, 2006).

8 “It Adds Up: The eason students’ math scores are higher in Quebec than the rest of Canada,” The National Post (Canadian Press) (September 6, 2017).

For further background on the Quebec socio-cultural context, see Norman Henchey and Donald Burgess, Between Past and Future: Quebec education in transition (Calgary: Detselig Enterprises, 1987).