The Oxford English Dictionary (OED) recently declared “post-truth” to be the 2016 Word of the Year. According to the OED, “post-truth” relates to or denotes “circumstances in which objective facts are less influential in shaping public opinion than appeals to emotion and personal belief.”

In recent years, we’ve clearly seen the confusion that results from so-called “fake news,” and the at-times devastating effects of misinformation. In December 2016, for instance, the spread of the “Pizzagate” conspiracy theory (which has been proven false), related to U.S. Democrats’ supposed involvement in a child-sex ring, eventually culminated in a man opening fire in a restaurant that was supposedly linked to the ring; the full account of the spread of the lie is traced on the Pizzagate Wikipedia page1 (note that Wikipedia articles are crowd-edited – this page was accurate as of February 8th, 2017, but may have been updated since then). Unfortunately, social media often acts as a vehicle for spreading lies; in particular, racist, sexist, and homophobic posts circulate freely and are legitimized by those who share them.

The digital spaces in which our students live, learn, and play are not immune to or sheltered from hateful posts and images. Consequently, today, perhaps more than ever before, we as educators have a serious responsibility to address social justice issues in online spaces – even if the resulting discussions are uncomfortable or controversial. 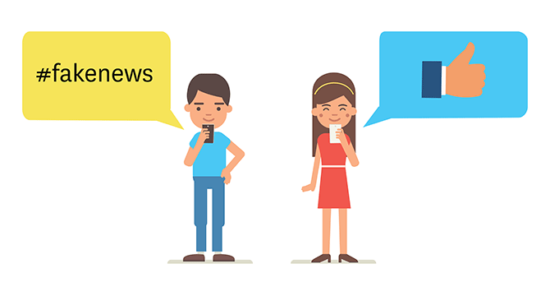 Silence can speak louder than words

As teachers, we know that if misbehaviour isn’t addressed, students will quickly learn that the behaviour is acceptable. The same goes for the false or hateful content that kids find in the digital world. If no one speaks up, children will have no reason to question the hurtful things that they see – and no reason not to join in. When it comes to social justice issues, silence is complicity.2

Of course, educators can’t be present in every online space, but we can model ethical, justice-oriented behaviour in the digital spaces we do occupy, which could mean anything from posting about current social justice issues on a personal blog to sharing articles or resources that promote equity on a class Twitter account. We might also bring online spaces into the classroom for critique and comment, perhaps by screencapping a problematic Facebook post and working as a class to construct an appropriate response. Without these actions, we risk raising a generation of young people who have neither the skills nor the desire to fight back against injustice or to work toward a better world.

Misinformation is a dangerous thing

Digital literacy, and in particular the ability to discern whether an online source is trustworthy and accurate, has always been important, but as the Pizzagate example shows, it is even more critical in a post-truth world because the consequences of believing falsehoods can be dire. Misinformation and fake news can be used to perpetuate hateful and/or hurtful actions toward particular groups; for instance, the fictional “Bowling Green Massacre”3 was used by the Trump administration to justify banning all refugees and immigrants from several Muslim-majority countries. Additionally, as Garry Kasparov tweeted, “The point of modern propaganda isn’t only to misinform or push an agenda. It is to exhaust your critical thinking, to annihilate truth.” That is, sometimes the spread of fake news is intended to tire us out to the point of no longer questioning what we are told, which can be exceptionally dangerous (look into the Milgram Shock Experiment4 for clear evidence of this).

Thus, as educators, we must learn how to evaluate and verify digital sources so that we can teach our students to do the same. This involves learning about and then teaching students tips and tools that can be used to identify problematic or false content,5 and bringing digital articles and images into the classroom for critique. For example, students might be asked to fact-check a list of terror attacks that U.S. president Donald Trump has claimed were not adequately reported by the media,6 in order to determine the veracity of the claim (hint: there are several major issues with the list).7 Of course, in order to bring these ideas into the classroom, it is necessary for educators to seek out, explore, and hopefully address these issues in online spaces themselves.

In a post-truth, digital world, it’s no longer acceptable for educators to sit on the sidelines claiming to be neutral. Hateful, hurtful misinformation can no longer be left unexamined and unchallenged. Rather, as teachers, we have the responsibility to fight back and to show our students how to do the same.

For more information about the EdCan Network’s Educator Well-Being: A Key To Student Success Symposium

Katia Hildebrandt is a PhD candidate and sessional instructor at the Faculty of Education, University of Regina.

Professor of Educational Technology & Media, Director of the Centre for Teaching & Learning, University of Regina

Alec Couros is a professor of educational technology and media and the Director of the Centre for Teaching and Learning at the University of Regina.