When I’m in Canada, I feel this is what the world should be like.

It is a given that Canadian classrooms will become more diverse as time passes. The difficulty is that the general notion of diversity most seem to possess is two-dimensional. It’s based on the false dichotomy of “us and them” that in essence categorizes human beings into two groups: those from within and those from outside the system. This view is wrong, both for the “us” and the “them” groups. Teachers are not culture-less. Indeed, many teachers are “the lost ones whose first cultures like unsettled spirits haunt their angst-filled reveries,”[1] while their students are “members of the diasporas… lost in the spaces between various identities: the teenager, the immigrant, the first language speaker, the individual from the first culture, the individual socializing into a second language and culture, the individual in neither a dominant first or second culture but one not of either culture.”[2]

We see Canada becoming chaotically diverse. We have seen this in our own province of British Columbia, where in one school district we have seen classrooms that enroll 100 percent Canadian-born white students who are diverse in many ways (the “shadow diaspora”[3]), while in other classrooms we have seen 100 percent immigrant students with 15 different first languages (L1s). There are also classrooms with Canadian-born students who speak a language other than English at home, and hundreds of other complex classroom compositions that make the teachers’ job of planning for teaching and learning both difficult and complex.

With only one in two Canadians aged 15 and over expected to belong to a family settled in Canada for at least three generations, and three in five in Metro Vancouver and Toronto expected to belong to a visible minority group,[4] cultural diversity by the year 2031 will be an integral part of everyday life. Diversity in Canadian classrooms will continue to increase even after 2031.

The term “superdiversity”[5] is used by some to explain the diverse contexts in which we may find ourselves as educators. Habacon suggests “Multiculturalism 3.0”[6] as a way of looking at our multicultural contexts beyond the traditional metaphors of “mosaic” or “tossed salad.” We have chosen to call this new diversity kinetic diversity, as it is and will be dynamic and constantly in motion, changing from classroom to classroom and within classrooms from time to time.

It is easy to overlook the reality that classrooms are not immutable entities existing unchanged over the course of an academic year. The degree to which students enter and leave classrooms and schools is dramatic. We have observed both elementary and secondary classrooms that had 100 percent different students in June than they did in September. There is also the kind of mobility associated with students from some immigrant groups leaving to return to their home country for different periods of time during the school year. When they return, they change the diversity in significant ways.

Culture is also a feature of kinetic diversity. What is culture? Sixty years ago Kroeber and Kluckhohn identified 160 different definitions of culture.[7] For purposes of this article, we define culture as the ideas, customs, language, arts, and skills that characterize or reflect a group of individuals in a given period. Keep in mind, however, that human beings exist in multiple intercultures, so that a student comes to school with a complex set of beliefs, perceptions, and behaviours related to privacy, cooperation/competition, personal space, eye contact, body movements, and physical contact. In addition, he/she possesses individual differences that are developed within a culture, which are often referred to as cognitive style. Cognitive style includes such characteristics as analytic, methodical, reflective, global, relational, and intuitive.[8] Helmer and Eddy also identify features such as assertiveness/compliance, dominance/submission, and direct/indirect communication styles.[9] Further, individuals possess backgrounds that include information about family structure – roles of family members, child-rearing practices, gender roles, adult-child interactions, educational expectations, expression of emotions, conversational rules, child-rearing practices, individual responsibility, and spirituality. The difficulty, of course, lies in the fact that families exist within cultures, and their views and beliefs are formed through interactions with their broader culture, their family’s first culture, and their local community’s culture, to name a few.

What teachers need to know about culture

There are hundreds or thousands of variables associated with culture and teaching and learning. The issues are complex and sensitive. However, we have found that the following questions are helpful in exploring cultures. While there are various methods to explore such questions, we have found a small focus group to be effective. However, it is essential to remember that the results of such a focus group are not generalizeable to larger groups or populations. What you learn from a knowledgeable member or a small group of members of a cultural group is their view.

There are sources that can be used for cultural information, such as Understanding Your Refugee and Immigrant Students: An educational, cultural, and linguistic guide, by J. J. Flaitz (2006) or Look at Me When I Talk to You: ESL learners in non-ESL classrooms, by Helmer and Eddy (2012). Again, it is important to remember that information you obtain from different sources does not represent all individuals in a particular cultural group.[10]

In teaching to cultural diversity, providing opportunities for students to express their identities may be another way to honour their cultural backgrounds. Identity texts (IT) – personal multimodal artifacts that students create as part of their learning process in order to represent their backgrounds, L1s and identities – may be a useful instructional tool. “Students invest their identities in the creation of these texts, which can be written, spoken, signed, visual, musical, dramatic or combinations in multimodal form. The identity text then holds a mirror up to students in which their identities are reflected back in a positive light. When students share identity texts with multiple audiences (peers, teachers, parents, grandparents, sister classes, the media, etc.) they are likely to receive positive feedback and affirmation of self in interaction with these audiences.”[11]

Are there too many ESL students in my class?

There appears to be a pervasive view that the number of ESL students in a classroom has a negative effect on overall learning. Yet the expansion of ethnic enclaves, especially in urban centers, is a significant trend[12] that energizes kinetic diversity.

We investigated this interesting feature of kinetic diversity.[13] Our purpose was to explore English reading achievement related to variations in the number of ESL students enrolled in classes. ESL methodology is based on the notion that students are in environments that offer significant access to English speakers. Logically, the more ESL students there are, the less opportunity there is to interact with English-speaking classmates. We explored this issue in six schools and 33 classrooms in two cities: one urban and one suburban; both with 60 percent ESL students. By policy, students attended schools of their choice and as a result individual schools varied significantly in the percentage of ESL students. Grades 4 and 7 were selected to explore differences in instruction and achievement related to communicative language and academic language.[14]

Our classroom observations and interviews with teachers revealed that they were convinced they did not have the expertise or training to deal with ESL students, and observations of their instruction revealed a whole-group lecture approach that one teacher referred to as “stand and deliver.” This approach did not account for the diversity of needs, abilities, and skills. We conclude there are never too many ESL students, but one-size-fits-all instruction is inadequate to address complex classroom diversity.

One might conclude that kinetic diversity makes appropriate and flexible classroom instruction impossible because of the seemingly endless number of variables and features a classroom teacher needs to take into consideration while planning. While instructional design is complex, we have isolated two variables that generally predict appropriate individualized instruction. They are L1 instructional background and English proficiency. An elementary student who has never learned to read in L1 and who has no or zero-level English proficiency should be involved in oral language development (L1 instruction if possible) and no English reading activities, while a student with three or more years of L1 instruction can be included in beginning English reading activities (see Table 1).[15] 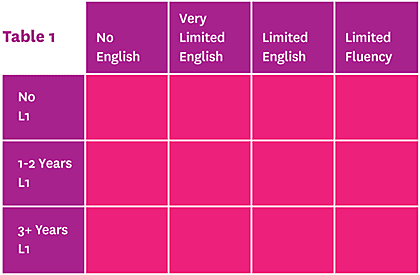 The matrix is based on the notion that the provision of appropriate comprehensible input is an essential requirement for teaching ESL students. In this respect, the matrix helps to predict what will be comprehensible for elementary students. A student who has an extensive L1 literacy background and has limited English will find connected English discourse comprehensible, while a student with no L1 background and no English proficiency will not. There are also essential differences between age groups. A five-year-old who has never been to school and speaks no English is entirely different from the 18-year old immigrant with no L1 schooling and no English proficiency, who is in turn different from the 60-year old with no L1 schooling and no English. They add to the kinetic complexity of diversity.

Canadian classrooms will continue to become more diverse and multicultural, particularly in urban classrooms. This kinetic diversity means that teachers will have to continue to build their knowledge of students’ educational and cultural backgrounds. While this knowledge, as always, will be helpful to teachers, the cultural differences and diversity within groups and inter- and intra-language group dynamics will impact classroom learning and teaching in important ways. In essence, kinetic diversity will require differentiated instruction that changes constantly as the complex backgrounds of mobile students transform the classroom on nearly a daily basis. The role of multifaceted, complex and hybrid Canadian identities in our students will also be an important factor as cultural diversity reaches unprecedented levels.

[7] A. Kroeber and C. Kluckhohn, Culture: A critical review of concepts and definitions (NY: Random House, 1954).

[14] See Cummins, 1979, 1981, 2000; and Cummins & Swain, 1986, for a discussion of “basic interpersonal communicative skill” (BICS) and “cognitive academic language proficiency” (CALP), the language of instruction and academic texts. BICS appears to take about two to three years to develop and CALP about five to seven.

Lee Gunderson is Professor and Head pro tem of the Department of Language and Literacy Education at the University of British Columbia.

Reginald D’Silva is a Lecturer in the Ritsumeikan Academic Exchange Program in the Department of Language and Literacy Education at the University of British Columbia.