Linguistic diversity has become a defining feature of Canadian classrooms today. Multilingual students, who speak different languages at home and at school, have become the norm rather than the exception, particularly in major urban centres. Take the Toronto District School Board and the Vancouver School Board: they both report over 120 languages spoken by their students and their families. It’s not uncommon for teachers today to have classes filled with students who speak many different languages at home. At a time when people are constantly on the go and technology makes it relatively easy to communicate around the globe 24/7, researchers have observed that children navigate their different language and literacy practices with natural ease; they have grown up in a world that depends on flexible language and literacy practices. Many teachers, however, don’t share students’ diverse linguistic backgrounds or experiences with growing up in a digitally mediated world. And teacher preparation programs often offer little required work with English learners and their families. Yet as classroom populations continue to diversify, the need to develop inclusive multilingual pedagogies also grows.

Are there ways to bridge this divide? How can teachers draw on students’ diverse cultural assets and build on the linguistic expertise that students bring into today’s classrooms, rather than constraining it? Surely, all students should leave school with more expansive linguistic repertoires rather than losing their home languages in the process of acquiring the language of instruction. Further, how can teachers engage parents in their children’s language and literacy development if parents don’t speak the language of instruction? Teachers, naturally, don’t speak all of their students’ home languages!

Dr. Jim Cummins has advocated that teachers engage multilingual students in the creation of what he calls “identity texts”: students are encouraged to use their home languages and cultural understanding alongside the language of instruction to produce multimodal texts for academic purposes that reflect students’ identities in positive ways.[1] Over the past decade, researchers and teachers across the country have been putting this idea into practice through the creation of a range of dual-language books, documentaries, installation art exhibits and dramatic performances.

Beyond the ESL classroom, identity text work can offer mainstream teachers a powerful strategy for building all students’ appreciation of linguistic diversity and for leveraging students’ and their families’ multilingual literacy expertise. Over the past seven years, I have collaborated with classroom teachers across English and French schools in Canada, France and the U.S. to explore the affordances, challenges and outcomes of engaging students collaboratively in multilingual project-based learning (MPBL). Most recently, I’ve partnered with elementary teachers in Toronto in English, French immersion and French language schools, as well as a private school, to design and implement MPBL across content areas such as social studies and science.[2] Over a two-year period, we worked with children in Grades 4-6 to produce collaborative multimodal and multilingual books using English, French and students’ home languages. Examples of students’ work can be seen on the project website: www.iamplurilingual.com.

Across these school partnerships, five principles emerged that can guide teachers and administrators seeking to cultivate a multilingual orientation and to design collaborative multilingual inquiry projects to enhance learning and to build social understanding of linguistic diversity:

2. Invite parents, families and community members to contribute their language and cultural expertise to help students bridge diverse home, school and community language and literacy practices. Parents, grandparents and other family members may be hesitant to volunteer in a school where they don’t speak the language of the classroom. Invite them in to share their languages and experience as multilingual role models, not only for their children but also for the entire class.

3. Group students of different language backgrounds to work collaboratively on content-based projects, as a context for developing language and literacy skills along with content knowledge and understanding. While having students who speak different languages work together may seem counter-productive at first, keep in mind that the goal is not that they become fluent in all of the languages represented, but rather to develop a welcoming curiosity about languages and one another.

4. Build students’ metalinguistic awareness explicitly by actively comparing different languages and how language(s) function, and identifying patterns for cross-linguistic transfer. Draw students’ attention to how languages work and how they are related. Bridge from what students already know in their home and community languages to the language of instruction.

5. Publish collaborative multilingual projects for authentic audiences through an end-of-project celebration, and through the use of technology to reach broader audiences. Celebrate students as creative, multilingual producers rather than consumers. Plug into other schools, community groups and families to share the multilingual work that students generate to extend it beyond your classroom and to receive feedback and inspiration to keep on.

Students’ reflections about themselves and their work speak to the importance of inviting students’ languages into the classroom. One student said about her group’s multilingual book, “No one knew I can speak Swahili before. It’s like now they know me for real.” Another student commented, “My work makes me feel original. I am the only person in the class who can read and write these three languages and that makes me special.” And yet another student remarked, “Before this project, I never liked reading and writing. Now I think I like it!” These powerful identity statements highlight how supporting students’ use of their home languages within the classroom increases their engagement; consequently, they produce high-quality work in which they take pride.

Beyond the students’ positive responses, teachers consistently report that doing multilingual work with students shifts how they see culturally and linguistically diverse parents.

MPBL creates an authentic opportunity to invite parents into the classroom and the school as language and literacy experts. This positioning of multilingual parents as having valuable language expertise allows parents who might otherwise feel marginalized because they don’t speak the language of the classroom, to feel welcome into the school. Furthermore, when teachers host celebration events to present students’ multilingual work to their families, teachers have noted that they have greater turnout and that in many cases, parents and extended family members have come to the school for the very first time. As one teacher explained, in reference to newcomer families:

“I’ve seen a greater confidence of parents in school… the fact that we valued their home language and culture within our French class allowed parents to be involved in the learning of French in some way. Even if it may seem paradoxical, the fact that we purposefully drew on their family’s language created a reassuring context for engaging in learning. They knew that we were not trying to exclude their culture or their identity.”

In my interviews with parents, I’ve found myself surprised by parents’ expressions of appreciation that the school affirmed to their child the value of their family’s home language and culture through MPBL. The sense that has emerged is that MPBL builds reciprocal relationships among teachers and families. One mother, for example, who had compared trying to get her daughter to learn Farsi to forcing her to eat her vegetables, recounted:

“[My daughters] weren’t curious about this ‘other’ language for a long time and the writing the translation in Farsi was a good thing and [my daughter] was happy that I could actually do it for her… it kind of opened up the door a little bit. Like she now thinks she’s more interested in the language.”

When schools affirm students’ home languages and cultures, parents become language and literacy experts in the eyes of their children, and multilingual parents are empowered to actively participate in their child’s learning at school and at home.

Another parent further explained how valuable it is for parents to have their children’s home languages affirmed by the school:

“I think the project has been good for [my daughter] because I think sometimes you need to mirror back to a child what they have… It hasn’t been apparent to them as a gift possibly and so having the school… pay attention to that is a way of saying to them, ‘You guys have gifts! [It’s] a really lucky thing that you have access to another language!’ It’s also powerful when it comes from teachers… As a parent when you hold the mirror up to your child to say, ‘This is the wonderful gifted person I see you are,’ it’s like, ‘Whatever, Mom.’ I think [kids] dismiss it. I think they’re pleased on one level but you as a parent sometimes don’t have as much weight. But when an external person validates that, it gives them a level of thoughtfulness about themselves that they don’t necessarily get when it’s just a parent mirroring back… When it’s valued elsewhere it’s a solid reinforcement!”

This parent’s reflection highlights that MPBL can forge mutually beneficial relationships among teachers, students and parents that multiply opportunities to affirm children’s identities as they integrate creatively their home and school language and literacy practices.

My current research investigates MPBL as a school-wide strategy for building multilingual language awareness and intercultural understanding with a local elementary school in Madison, Wisconsin. In this work, parents’ reflections about their children’s collaborative multilingual work continue to affirm that teachers and parents must be partners in raising children to become thoughtfully engaged citizens in our diverse world. In closing, listen to the responses of parents following the creation of multilingual class books with five Grade 1 classes as part of a science unit about plants:

• “I was so pleased with the book I was almost brought to tears. Particularly considering the xenophobia in our culture today, it’s a wonderful way to promote the inclusion of different languages and cultures. Thank you!”

• “I think it was great to have [children] working on something together. This book is definitely something we will keep and reflect back on and share with other family members.”

• “We wished we could have contributed with a foreign language of our own! [Our son] can recognize the different languages (mostly) on sight. He was very proud of being able to say a few sentences in Arabic.”

• “My sense is that seeing… languages together in the book gives children the visual reminder of other classmates’ perspective. This project seems original, creative and useful!”

Around the world where racial, linguistic, religious and political differences threaten to divide communities, the need to build bridges among teachers, students and families from diverse backgrounds is critical. Affirming and leveraging students’ cultural and linguistic assets helps move towards building more inclusive schools and gives students an opportunity to learn how to work together across their differences, within the microcosm of their classrooms. 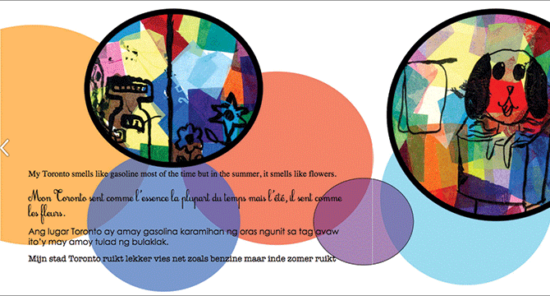 We want to know what you think. Join the conversation @EdCanPub #EdCan!

[2] This research was generously supported by a Joseph Armand-Bombardier Canada Graduate scholarship (2010-2013) from the Social Sciences & Humanities Research Council.

Dr. Gail Prasad, originally from Toronto, Ont., is an Assistant Professor in the Department of Curriculum & I...

A Curriculum for Educating Differently