“Today we begin dueling,” I said to my Grade 7 Science class on a cold February morning. Ambition, worry, and excitement swept around the classroom. I turned on the dramatic instrumental music I had queued up on YouTube and began explaining the rules. 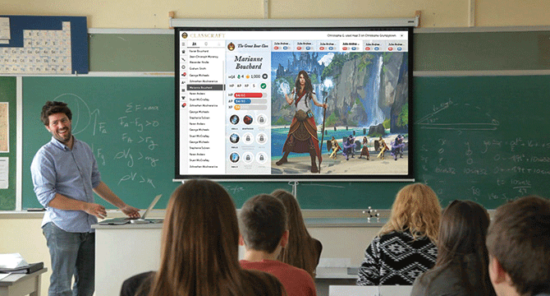 Flashback to September, when my students take their printable Classcraft sign-up sheet home. They download the app on their phones and create and customize the avatar of their choosing. The app walks them through the entire process and by the time they are back in my class they’re ready for our adventure. They can use their character’s abilities on either a device after school or my SMART Board during class time. They complete quests and earn points to gain new abilities. In much the same way that Dungeons and Dragons offers a creative outlet for the imagination, my structure invites students to engage with the material in inventive ways every day.

You see, my classroom isn’t really a classroom. It’s a fantasy realm where my students are transformed into wizards, warriors, healers, and adventurers. I stand above them, the god of the game who rewards positive behaviour and chastises those who stray from the laws of my world. The portal to the game is the SMART Board, where my narrative advances and new challenges await.

In this case, each team chooses a champion to fight for them by answering skill-testing questions at the front of the class. For every correct answer, they gain experience to advance through levels for their character. However, leveling up means nothing without real-world consequences and benefits. Becoming a wizard means they get to cast spells during a test that give them hints. Warriors can go hunting, allowing them to eat in class, if they pay the price. Extra days to complete assignments, using notes during assessments, and now dueling, are some of the other benefits they can unlock and use.

These benefits go hand in hand with the threat of danger. Not handing in assignments, being disrespectful, or not trying are transgressions that can cause damage to their character’s health and/or kill the character outright. Sometimes I’ll catch students off-task and send a bit of damage their way. If they are a healer, they can to use their powers to regain some health. Otherwise, to resurrect themselves, my students must complete extra homework, go to math club, or do a dramatic reading from a textbook in front of the class – all penalties they try to avoid.

I always try to keep the game fresh with new concepts, such as today’s dueling. It is a simple review process that allows students to compete against one other to reinforce unit information. The kids love it. The imaginative frame of the game increases engagement exponentially.

Technology provides the filter to all of this: a backdrop that my projector can throw on the board, music to heighten tension, and a way to track and illustrate students’ progress. Gamification can be difficult to pull off if you don’t have the technology to log information about the game, the quests that the students are engaged in, and their characters’ progress as they advance. A simplified Dungeons and Dragons character sheet that the students manage themselves can track their character, but you, as the teacher, need to keep a running log or portfolio of their progress. I use apps and the SMART Board extensively. Apps such as Classcraft can log character stats and manage boss battles for you. ClassDojo tracks and rewards student behaviour over the course of a school year. Both are low maintenance and have free versions.

The key to using long-term narrative style or role-playing games in the classroom is that you never show your entire hand. Like real games, complexity should grow as the game progresses. I waited until February to begin dueling, right as student interest in the school year began to wane. Next month, a small adventure based around the Grade 7 Structures cluster will maintain that engagement. By the end of the year, all features are revealed to my students, and the game starts anew in the fall with a new grade and new quests.

And for how to create a character see: http://dungeonsmaster.com/2010/01/a-beginners-guide-to-dungeons-dragons-part-2/

To find out more about apps I use in my classroom:

Alex Murray is a Grade 7 and 8 science and social studies teacher at Waverly Park School in Brandon, MB.