by: Empowered Mi’kmaw community builds a high school of its own

In fall 2010, after several incidents of student suspensions and expulsions at a nearby provincial high school, members of Potlotek First Nation in Nova Scotia talked about having a school of their own.

Discussions came to a head several weeks later for the Mi’kmaw community on Cape Breton Island when two more students were suspended on the same day in the first week of classes in January 2011.

One month later – in response to community concerns – Potlotek set up its own high school program based on Mi’kmaw traditions and the provincial curriculum, with an initial intake of 35 students.

“We felt this was the only way we could see to save our kids.”

“They were the ones who said ‘we want a school’ and they got a school,” says Nancy MacLeod, Director of Education for Potlotek, citing pleas from students and parents in the community of 600 people.

The speedy response was possible, in part, because Potlotek is a member of the Mi’kmaw Kina’matnewey (which translates as the “whole process of learning”) education authority. In 1999, federal government legislation recognized Mi’kmaw self-governance in education, enabling members of Mi’kmaw Kina’matnewey to make local decisions about elementary and secondary schooling without seeking bureaucratic approvals under the Indian Act. 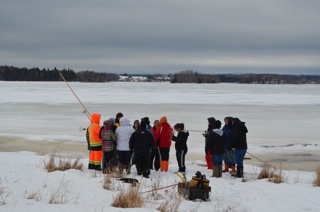 Potlotek has an elementary school but, until last year, high school students had to travel off-reserve to a provincial school where they experienced low graduation rates and complained of incidents of bullying. “The community propelled us forward to be as aggressive as possible in promoting the concept of the school,” says Potlotek band manager Lindsay Marshall, a former band chief who helped negotiate the self-governance accord in the 1990s. “We felt this was the only way we could see to save our kids.”

Speedy implementation of a high school program, in barely a month, “would have been almost impossible” under the Indian Act, he adds.

Others assisted the grassroots effort too. Mi’kmaw Kina’matnewey, the education authority, and the Council on Mi’kmaq Education, worked with the Nova Scotia Minister of Education and her department’s Mi’kmaq Liaison Office to ensure the Mi’kmaw-enriched curriculum, taught by certified teachers, met the requirements of the province’s high school diploma.

With no physical building of its own yet, the high school borrows space from administration facilities (used for daytime adult education) and rooms in the elementary school to deliver classes from 3pm to 8pm.  As a central support agency for member communities, Mi’kmaw Kina’matnewey also provided funding for books, materials, and teacher training.

“It has a lot to do with the community deciding and telling us what they needed,” says Eleanor Bernard, Director of Education for Mi’kmaw Kina’matnewey. “That is the biggest factor.”

In Potlotek, what community members wanted was success for a new generation of learners.  In its first year, the school hired four teachers (native and non-native) as well as a Mi’kmaw social worker to help students cope with drug, alcohol, and social issues. With classes starting in mid-afternoon, five members of the community take turns preparing a hot meal at 5:30pm every school night for students. This year, enrolment climbed to 50 students and five teachers.

Students follow the provincial curriculum enriched by in-class and outdoor activities that included Mi’kmaw traditions and ceremonies.  For example, elders teach students how to fish for salmon – an opportunity for them to learn about their treaty rights as well. Several times a year, the school puts on language camps to foster student awareness of their cultural identity. The band is in the process of developing land on a nearby island as a science camp for students to learn math, biology, and other subjects from a traditional perspective. 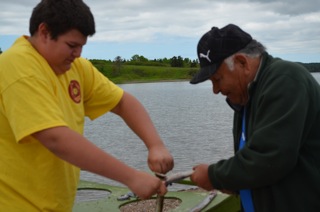 The school also brings a Mi’kmaw approach to teaching and learning. Instead of issuing suspensions for unacceptable behaviour, the school gives students a choice. If a conflict erupts, students can meet with the social worker to draft a “wellness” plan and participate in a “talking circle” that gives everyone at school a voice to speak about the incident. Alternately, students of legal age (16 years) can choose to withdraw from school.

“I feel my heart is going to burst with pride,” she says. “We are a small community but every one of these kids belongs to us.”

In its first 18 months of operation, the school had only one incident that required a talking circle, says Ms. MacLeod, the Education Director. Mr. Marshall recalls an incident when a male student was caught smoking marijuana at school and sent to the office.  The student was told “the good news is that you are not suspended. The bad news is that you are spending a day with the elders.” “That young man never smoked in school again,” says Mr. Marshall.

In 2011, the school had its first graduate, now in second year of university, and three more graduated last June. Margaret Poulette, a community member who works with adult learners and youth on special projects, says the graduation ceremony is an emotional moment. “I feel my heart is going to burst with pride,” she says. “We are a small community but every one of these kids belongs to us.”

Ms. MacLeod, a non-Mi’kmaw active in Nova Scotia native education for almost 30 years, makes no pretense that dropouts are among several challenges for the school. But consistent with its community-based focus, Potlotek brought together students (those doing well and struggling), parents, teachers and others this fall to discuss potential solutions. Meanwhile, the community has embarked on a fundraising campaign to build a traditional longhouse that, when completed, will include space for an actual high school.

In the meantime, Grade 10 student Gideon Doucette says he likes going to Potlotek High School because it offers small classes and regular exposure to Mi’kmaw teachings and tradition. Before school, he teaches drumming to younger students, an experience he says reinforces his Mi’kmaw identity.

The 16-year-old failed Grade 9 at the provincial school, successfully repeating the program at Potlotek last June.  He now rates as “very high” his chances of graduating in a couple of years.

“I want to move forward in my life,” he declares. “I plan to be lawyer and stand up for our treaties and our rights and help more Mi’kmaw people.”