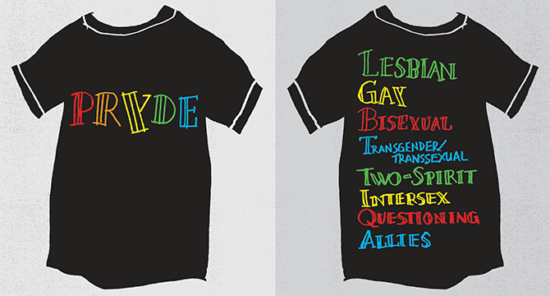 We all wonder where we fit in and how we can find community. This narrative is particularly resonant for queer and trans identifying youth, who often struggle to find community and belonging in their home and school lives.

Through our PhD work and our experiences working with LGBTQ+ (Lesbian, Gay, Trans, Queer/Questioning, and Others) youth, we have witnessed the importance of finding community and belonging. As LGBTQ+ educators ourselves, we have not only practical experience working with queer and trans students, but lived experience. And while we are passionate about creating more inclusive classrooms for all students, we are also aware that the current politic is still very white and gender normative.

We are often asked, “How do you create safe and inclusive classrooms for queer and trans youth?” While considering this, we need to first think about who we consider queer and trans. The LGBTQ+ communities are incredibly diverse in terms of intersecting identities, and it is important that our work as educators reflect this.

Homonormativity: What does it mean?

Ahmed, a queer Muslim youth looking for belonging and acceptance, attended his school’s Gay-Straight Alliance (GSA) hoping to find community. The group was largely white students, who were dismissive of Islam and told Ahmed that his religion was homophobic. Ahmed, feeling less than welcome, decided to leave the group and find his own community outside of the mainstream queer and trans movement.

Eliza, who identifies as trans but keeps that private at school, confided to the GSA teacher-advisor that “I want to be able to talk about who I am, but I’m not gay, and I worry that if I come to the GSA people will figure out why I’m there.” Hearing that the students involved are mostly gay and lesbian didn’t assuage her concerns. Students of various gender identities, racial backgrounds, abilities, and other identities fall within the LGBTQ+ spectrum. Still, much of queer and trans activism focuses on white gay and lesbian, or homonormative, representations of LGBTQ+ individuals.

Homonormativity is the valuing of white, gender-normative representations of queer1 and trans people to the exclusion of queer and trans people of colour and those who do not fit rigid gender norms.2 Homonormativity valorizes marriage as the ultimate goal for queer and trans individuals, as per the slogan “We’re just like you, except for what we do in bed,” and presents a narrow model of both who can be gay, and what it means to be gay. In schools, this can be seen in the mostly white representations of LGBTQ+ individuals in children’s literature, for example.

How can teachers be cognizant of homonormativity while considering queer and trans issues at school? Simple! We need to think beyond white and gender-normative representations of queerness, and move beyond the nuclear family model of “two moms, or two dads” in conversations with students. Queer and trans communities are diverse and require representation that acknowledges the intersections of various identities and locations, such as class, race, gender, nationality, disability, etc.

There are concrete steps school staff can take to create a more welcoming and inclusive space for all queer and trans students.

Begin in the elementary years

Adam’s elementary teacher experience demonstrates the importance of incorporating queer and trans content into the school routine while directly addressing homophobia and transphobia at a young age. Developmentally, preschool aged children are building their understanding of categories – including which ones they belong in – and this often leads to gender policing. Young children replicate the norms they are exposed to and Adam has seen young children regulate chosen toys, colours, games, and stickers based on gender. The educator’s duty is help children make choices based on individual interest instead of gender identity or social norms. Gendered norms may seem to be an innocent concept at this age, but they significantly limit and harm many students.

Children are identifying as queer and trans in elementary settings, and at younger ages than ever. Working with the Gender-Based Violence Prevention team in the Toronto District School Board, j often works with children as young as four who have a very clear understanding of their gender as different from what was expected of them. The rise of GSAs in middle schools speaks to student needs. It is important that all students know that people of all sexual orientations, gender identities, and gender expressions are welcomed and celebrated in schools.

The name Gay-Straight Alliance was coined 25 years ago, and while once radical now needs to include a broader range of identities. Encourage students to consider more inclusive names, like Gender and Sexuality Alliance, Pride, a Rainbow Alliance, or others, and gently help them understand the implications of the names they are considering. j recalls: “One of the groups I was working with decided that instead of being a Gay-Straight-Alliance, they would call themselves GLOW, for Gay, Lesbian or Whatever. It took some work to help them see how being referred to as a ‘whatever’ might not be welcoming for some students.”

j observes, “White teachers often suggest that homophobia comes from people of colour. Truthfully, no one community holds the monopoly on homophobia, or on inclusion – homophobia is present in all communities, as are pockets of celebration. When I began supporting GSAs in Halton, many of the teachers who became teacher-advisors to GSAs were teachers of colour, because they were the people already engaged in equity work.”

Seek out resources for and by Black people, Indigenous people, and people of colour. When the LGBTQ images, books and movies we use in schools are predominantly white, we perpetuate the false stereotypes that being queer or trans is a white thing, and that communities of colour are more homophobic than white communities. In seeking to decolonize education, it’s also important to recognize two-spirit identities.3

Many trans students j has worked with have shared that while teachers may have encouraged them to attend the school’s GSA, their GSA did not address gender identity or gender expression. Further, they feared attending would out them as trans. Addressing gender identity will make your school safer for trans students, femme boys, butch girls, and everyone else. Become familiar with gender non-binary and androgynous identities and what those students need.

Recognize coming out as an option, not a goal

“Coming out,” or the experiencing of identifying yourself as a sexual or gender minority, is often forwarded by mainstream LGBTQ+ politics as the “end goal” or desirable destination for queer and trans youth. While coming out can be an empowering experience, for some, particularly queer and trans youth of colour, coming out presents itself with a myriad of cultural, religious, and familial barriers that can be challenging for family dynamics.4 Trans students who have previously transitioned may feel that “coming out” will put them at risk for violence and transphobia, and that keeping their trans status private is what allows them to live most authentically. Anti-black racism and/or femmephobia in LGBTQ+ spaces,5 and the devaluation of gender and emotional expression that is deemed feminine,6 particularly for gay and queer men,7 are other factors that can make coming out feel unsafe.

To ensure students’ individual identities are respected and they do not feel pressured to “come out,” make sure that privacy and openness are both talked about as valid.

For GSAs to be vital emancipatory student groups, they need to be places of possibility and transformability for all students. Homonormativity limits who can find belonging; pushing back against homonormativity creates new possibilities, and ways for GSAs to partner with other equity-focused student groups. Finally, while it remains important for students to have spaces to organize, learn together, and support each other, GSAs cannot replace the institutional work that all schools must take on. Inclusive GSAs that challenge homonormativity are one part, but not the only work we need to do.

1 For the purposes of this paper, we are utilizing the term “queer” to encompass all individuals who identify within the LGBTQ+ spectrum.

7 Brandon Miller and Elizabeth Behm-Morawitz, “‘Masculine Guys Only’: The effects of femmephobic mobile dating application profiles on partner selection for men who have sex with men,” Computers in Human Behavior 62 (2016): 176-185.

Adam William John Davies is a PhD student in Curriculum Studies and Teacher Education at the Ontario Institute for Studies in Education of the University of Toronto. Adam's research area specializes in anti-oppressive pedagogies and equity within educational practices and policy.

j wallace skelton is a PhD student at OISE/UT, and a member of the Toronto District School Board’s Gender-Based Violence Prevention office. j’s middle school book Transphobia: Deal with it and be a gender transcender has been short listed for the 2017 Red Maple Award.

Is All Play Created Equal?