This content has been re-posted from Deirdre Bailey’s Blog at: http://savouringtheish.blogspot.ca/2013/10/my-story-of-change-in-education-student.html. Photos courtesy of Deirdre Bailey.

This content has been re-posted from Deirdre Bailey’s Blog at: http://savouringtheish.blogspot.ca/2013/10/my-story-of-change-in-education-student.html. Photos courtesy of Deirdre Bailey.

This story was put together as part of the Canadian Education Association’s “What Standing in the Way of Change in Education” Conference in Calgary, October 21 – 22, 2013.

I only remember a few specifics from my first few weeks in the classroom. I had big ideas but the execution was definitely messy. I remember trying to keep track of things that worked and didn’t in those first few months and the second category was certainly larger than the first. I remember the first time I gave the students a math problem that asked that they apply an understanding of place value. Within ten minutes, three children were crying because they didn’t understand and were afraid to get the wrong answer. Somehow I hadn’t anticipated that my fifty students from all over the city would have such varying experiences and attitudes towards learning.

I was so thankful to be partnered with Amy Park, an incredible teacher and leader in inquiry-based practice. Her early perspective and support during our team-planning blocks quickly became a lifeline. It became evident that my thinking was always amplified through conversation with Amy. A lot more seems possible when someone has always got your back.

A pivotal moment in those earlier conversations came from the acknowledgement that a majority of students seemed to be struggling with anything  beyond simple computation in mathematics. They kept waiting to be told what to do. As I tossed out possible learning opportunities,  I remember Amy asking the question “are we teaching students what to think or are we teaching them how to think?”

We realized these 9 year olds needed an opportunity to practice thinking. We needed to start by talking about the art of having a thoughtful opinion and being open with it. Two weeks into the year we decided to team-up. We gathered all 50 students in an open space in the school and asked them to share conjectures about how they might define: “multiples of one.”  Hesitantly at first, we heard “any number with a one in it, every second number, every number that ends in a one.” As students saw their ideas considered and supported, momentum for participating in the conversation grew. Partial agreements about some conjectures lead to conversations about whole numbers.  The kids debated whether zero and negative numbers could be considered multiples. We looked at whether two non-identical conjectures could mean the same thing and both be completely correct. 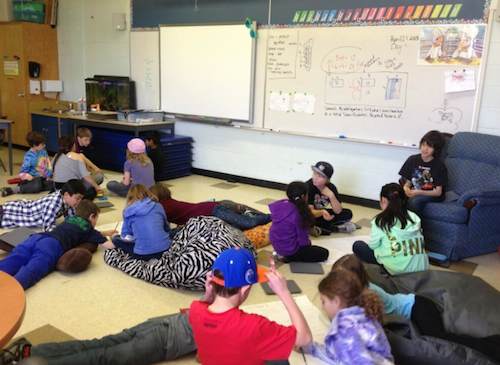 I learned more about mathematics and teaching that day than I could have imagined. I thought we’d have breezed through multiples of one. We didn’t even get past it. But what a waste it would have been to prescribe a definition and miss the magic of abstract discussion and debate among nine year olds. How could we presume to know what they understood, how would they know that they did, unless we allowed them to debate, to defend and to support their ideas?

I started my year with the expectation that my role was to help students understand exactly what it was that I wanted them to know; my goal was to track their progress and ensure that they were headed in the right direction. Unknowingly, I had intended to replicate my thinking in my students without ever having asked for theirs. That day in math class, I learned that even as a teacher, in a position in which I have theoretically earned the right to assume my expertise should direct the learning – inviting students to contribute blew my narrow perspective wide open.

As our year progressed, providing opportunity for students to engage in conversation and to push each other’s thinking continued. Our classes often combined to share their ideas and we found ourselves pushing desks and chairs out of the way on a regular basis. Conversations were always better when students weren’t at their desks so some old mats discovered in the gymnasium hallway were appropriated for class-wide “congresses.”  We also found that students grew increasingly competent in advocating for different workspaces and were constantly moving back and forth between classes or pulling out the mats and lying on their bellies to discuss latest discoveries. It was sometime not longer after that I came across an article written by a university professor who had moved his classes to a nearby coffee shop in order to encourage his students to engage more readily in conversation and debate. He discussed the limitation of a desk-based classroom culture and the ease with which moving a to a less formal space shifted the attitudes of his students.

When we brought it up with the students, they quite willingly shared their ideas for how we might re-design our classroom space and the result was a unanimous vote in favor of completely converting one of our classrooms to a cafe-style area while keeping the other for what the students called the “university” – a space for more quiet, focused and individual thinking and writing. Our weekly blog had kept parents informed and involved in the process and that week we had beanbag chairs, arm chairs, and Ikea side tables join the gym mats in what would become affectionately known as Barkley’s cafe. The cafe and university became fixtures at our school as the students helped us redefine what it means to be on task and engaged. It was the physical manifestation of a different kind of teacher-student relationship. One in which people could walk in right away and not know where the teacher was because we had become so much a part of the learning that we were also cross-legged on the floor listening to the students justify their thinking. 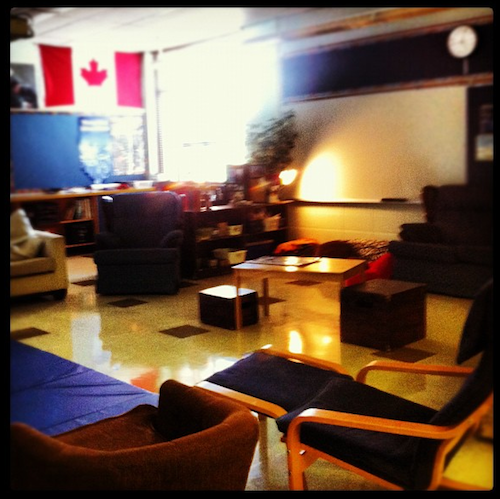 One of the best results of this change was witnessing students engage in conversation with guests to the school about the design of their workspace and the rationale behind it. I remember a teacher from a visiting school sharing that one of our students had told her that this space was different was because students here were treated like their ideas mattered and could make a difference.

Looking back I have to acknowledge that there were a few pretty key pieces that contributed to this change. First and foremost, it was the students that were willing to share their unique vision with confidence. I’ve since learned that every time I forget to ask the kids, it’s a mistake. Our school also supports a risk-taking culture that encourages teachers to keep taking a step forward, recognizing that every time that step is in the wrong direction that it was a valuable learning opportunity. A few months after the change, Amy and I were discussing our evolving collaborative practice with our principal and we made a point of thanking him for letting us move all the furniture down the hall. He responded with – “To be fair, you didn’t actually ask – although you’re welcome – we trust you.” In a way, that confidence had the same effect on us that ours had had on our students – we were empowered.

This change in our classroom environment was a product of co-designing learning tasks in which student voice had space and validity. Kids are so innately curious and creative. All that is left to us, is to foster an awareness of the possibilities that surround them, to let them ask questions, make decisions and make things different.

I’m Deirdre Bailey and this is a story about bringing students into the conversation. 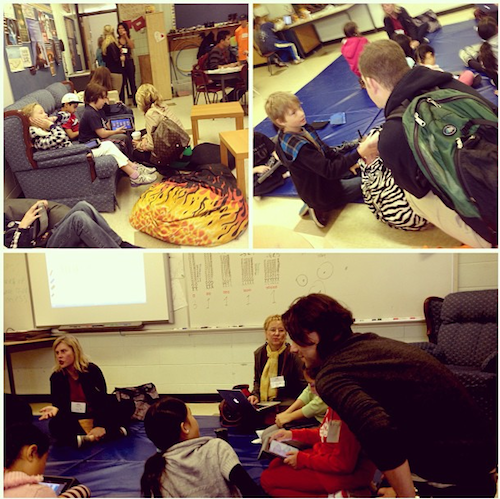 Students share their work with visiting teachers at #ConnectEdCa

Deirdre has returned to teaching Physical and Outdoor Education at the Calgary Science School having spent two years teaching Grade 4 Math and Science. She is committed...

Giving to EdCan could win you an epic NYE bash!

The Case for Investing in K-12 Staff well-being

Education Staff and Stakeholders in B.C., Alberta and Ontario