Home / Magazine / Theme 2012 / It’s Not About the Toys: Putting Technology in its Place
Previous Article|Next Article

Depending on your age, you’ve probably heard some enthusiast rave over the latest piece of high-tech hardware – Smartboards, laptops or electronic tablets – and how it would single-handedly revolutionize the classroom. Sadly, you probably have a story too about out-of-date computers or Smartboards lying idle in the storage room. Across the country, with tight budgets and constant pressure to upgrade in the name of “21st century learning,” school boards are struggling to put technology in its place. In British Columbia, two boards with different profiles have come to the same conclusion – that effective integration of technology in the classroom requires on-the-ground support for teachers and students.

The Vancouver School Board, with 55,000 students and declining enrolment, has 110 schools, including several around a hundred years old. That creates special challenges to upgrade the physical infrastructure for adequate Internet bandwidth and wireless capability. As of 2012, the board had more than 650 mobile devices available for classroom use.

Southeast of Vancouver, the suburban Surrey School District is the largest in the province, with 70,000 students, enrolment growth and more than a dozen new schools in the past 20 years. So far, according to officials, the district has distributed 5,000 iPads to classrooms and expects to have all 125 schools with wireless access by the end of the year.

But the superintendents of the two school boards – Steve Cardwell of Vancouver and Mike McKay of Surrey – talk the same language about posing the “what” question about technology: what will the devices do to improve the education experience of students and teachers?

Mr. Cardwell, recalling his experience at a previous board, says “every school became wireless and we purchased laptops for all of the teachers at the elementary level from grades 3-7 and put two mobile laptop carts in every school. That certainly sparked interest and innovation, but not across the board. And that’s my concern: I would much rather support innovations and build on them as islands, not unto themselves, but as significant movement forward in using technology appropriately for teaching and learning. Really it is about what we are doing with the technology.”

Mr. McKay adds his own cautionary note. “We’re still not all the way there, around defining kids’ use of it as a tool and a resource rather than as an end in itself. It’s a means to an end around effectiveness and efficiency of learning, around pulling in access to people and resources, and around interconnecting in ways that are highly strategic and efficient and so on. But we’re getting there. We’re almost at the end of the journey because for a lot of years there was a pretty poorly architected technology plan.”

In both cases, the boards have adopted similar strategies to create opportunities for teachers to explore how the new devices can expand the repertoire of inquiry-based learning projects and other activities in the classroom. In Vancouver, a strategic technology plan released earlier this year defined “student engagement, learning and success” as a central goal and declared the district’s priority is “to provide technology supports and resources to students and to school-based teaching and support staff.” In Surrey, the district promotes collaborative inquiry by teachers to explore how technology and other tools can transform the learning environment for students.

“We are making sure that our school leaders, and school principals, are provided with opportunity to experiment, to learn and to recognize the power [of technology],” says Mr. McKay. “We’ve had seminar sessions all through this year, in spite of the [now-concluded] job action, and dinner series for people to listen to and work with educators who have a sophisticated approach as to how to use technology to support learning. We do that with principals, we do that with teachers who connect with schools.” 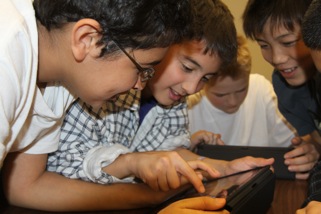 In Vancouver, one sign of the evolution in thinking about technology came two years ago when the district struggled to close an $18-million budget shortfall. That year, says Mr. Cardwell, only one new item was added to the annual budget: the position of District Principal of Educational Technology.

The position was filled by a veteran teacher well-versed in technology and deliberately combines elements of “top-down” and “bottom-up” strategies for change. In her board-wide capacity, District Principal Audrey Van Alstyne evaluates school needs and where to place scarce equipment. But a lot of her work (she jokingly renames her job title as “classroom of tomorrow”) is spending time in schools with teachers to support and encourage their use of mobile devices in classroom activities that connect students to each other and even to their peers in another country working on the same project.

She looks for receptive teachers and schools that become models for what is possible in the classroom. In a version of “pay-it-forward,” she will provide iPads for three months to a group of two or three teachers who receive in-service training and use of an iPad cart (with wireless access) for the classroom. Ms. Van Alstyne says teachers can keep their devices if they agree to share their experiences with other schools in at least three workshops. “Everyone has agreed to facilitate workshops for us and the word has got around,” she says. “Now when I go to schools, teams of four to six teachers are interested in supporting this initiative.” In what for her is an encouraging sign, even shy teachers want to practice with the devices. “They say it is changing their teaching.”

This year, the board approved four half-time positions for classroom teachers to act as mentors (see story online: www.cea-ace.ca/ theme2012) to instructors at other schools who are interested in, but unfamiliar with, using technology for classroom projects. Again, the strategy is to encourage peer-to-peer collaboration where teachers and schools are ready to explore using technology to engage students.

Jordan Tinney, a former senior official with Vancouver who became Deputy Superintendent in Surrey in August, says technology is “absolutely a game-changer” for the role of the teacher.

“It will be the students themselves who are going to change it, by demanding new ways of learning and demonstrating new ways of learning themselves,” he predicts. In 2011, he worked with Math teachers in Vancouver and Surrey in a three-day workshop that gave teachers access to any technology they wanted to develop online Math modules for all Grade 10 and 11 teachers – the beginning of what Mr. Tinney hopes is an online repository for secondary mathematics. “What was really fascinating was watching the range of teachers who came to the workshop, what they built and their own learning that went along with it,” says Mr. Tinney, who writes a blog on education leadership (www.jordantinney.org). “I learned a lot in those three days about what teachers are going to need for support. But I also learned that there is so much material already out there, and it is quality material.”

Surprisingly, say administrators, a younger generation of tech-savvy teachers don’t necessarily know how to adapt mobile devices or other tools for effective classroom instruction. “We make the assumption that the ability to use the stuff translates into the ability to use it in the classroom,” says Surrey’s Mr. McKay. “That’s not true. It requires thoughtful architecture.”

That need for “thoughtful architecture” also applies to faculties of education responsible for training a new generation of teachers. At some schools, technology is a stand-alone course while others have structured programs to embed technology-enhanced instruction across the curriculum for teachers.

At Simon Fraser University’s Faculty of Education, prospective teachers learn about technology over the course of their 12-month program through a blend of on-campus and field practicums.

“So you don’t take a course in technology,” explains Dean of Education Kris Magnusson. “You ask questions like how might have technology helped me solve that thing I just saw or did in the classroom? So it is much more of an original problem-based learning.”

In addition, he says, teachers in training are expected to use “reflective practice” to examine their own skills and knowledge, incorporating self-assessment and feedback from others to identify where they need to do more work. As part of a “curriculum-mapping” initiative, the faculty is evaluating the delivery of content, including technology, to ensure coverage of key issues.

“For example, in technology, most of them would introduce a workshop on certain aspects of technology integration within the classroom…Students would go through all that and be expected to demonstrate how they’ve used their learning in a practicum-type situation and to reflect on how that went,” says Prof. Magnusson. “We think genuine learning doesn’t necessarily happen because you label a three-credit course ‘Technology Integration in the Classroom.’” The approach taken by his faculty, says the Dean, “is much messier and harder and more difficult to pinpoint but ultimately a more effective way to go at it.”

As thinking continues to evolve on how to harness the latest tools for tomorrow’s classrooms, Surrey’s Mr. Tinney says it’s time to gain a sense of perspective about technology. “Let’s not put it on a pedestal,” he urges. “Let’s talk about it being just like the air we breathe – it just is. So how can it be part of the experience? So that when you leave school you’re leaving with a set of competencies and tools at your fingertips.”

Jennifer Lewington is an award-winning journalist who reports on education and urban issues for publications in Canada and the U.S. Email: jlewington@bell.net; Twitter: @JenLewington