There’s the usual chatter and giggling as the students in this rural Ontario high school fill the bleachers on a Friday morning. They quiet down quickly when another high school student walks to the centre of the gym, lit by a spotlight. With her golden-brown skin and white hijab, 15-year-old Noura Alshaher looks very different from most of the students in the audience. She’s joined by 15-year-old Assem Esmail. Noura is small for her age, and she smiles shyly as she picks up the microphone. As she talks, telling the story of her journey to Canada, the screen behind her flashes photos of the city she and Assem once called home: Damascus, Syria. The first images are of a lush and beautiful city, bright with flowers. Then they change to shots of homes damaged by bombs, walls reduced to rubble, streets clogged with the remnants of people’s lives.

“I want to show people how Syria used to look,” she says later. “They see only the photos of the demolished buildings and they don’t know how beautiful it used to be.” You can hear the grief in her voice.

There are ten students who have come to share their stories through spoken word, song, dance and video presentations on this spring morning. They are part of the Crossing Borders program organized and facilitated by ESL teacher Lynn Schulze, of Waterloo Collegiate Institute in Waterloo, Ontario.

Noura has been in Canada just four months, and she struggles a bit with English. She talks about the day that she went to school and found the building surrounded by buses. The students were sent home: no more school. “Nowhere was safe,” she recalls.

Indicating the photo of students in a war-ravaged classroom, Assem says, “This is not what schools are for.” Then he tells how his family fled to Egypt, but found life there to be violent and hopeless.

Later, Abdulrahman Mohammed sings about his love of his homeland, and even though few in the audience will understand the words, the emotions are clear. Ahmad Al Mahmood, also 15 and from Syria, is accompanying him on the tabla (a drum). When he smiles, deep dimples appear in his cheeks. The audience smiles back.

Mona Alatia, 14, describes how relaxing at home with her family turned to sudden terror when a helicopter began dropping bombs on their street. “We moved the next day,” she says. “We eventually got to Jordan, but the people there didn’t want us. It took four years, but eventually we were accepted to go to Canada. Being a refugee in some places is almost worse than living in the middle of the war. But in Canada, we are accepted.”

This is her very first time telling her story to a Crossing Borders audience. As the group enjoys bagels and drinks at Tim Horton’s after the presentation, she says: “When people clapped for me, it was amazing.”

Lynn Schulze has been teaching English as a Second Language at Waterloo Collegiate Institute (WCI) for 14 years, and is now head of the department. The Crossing Borders program, she says, started almost by accident. A Canadian student had the experience of volunteering with some newcomers and was so moved that she wanted to shine a light on them to help other students understand them a little better. She created a documentary featuring newcomers telling their stories in their own words. When that was a success, Schulze encouraged some of her other students to find creative ways to reach out, share their stories and express themselves, and shared them with fellow WCI pupils. “Right from the beginning, it made a difference in our school,” she says.

Schulze recognized that other schools and other groups such as school boards, teachers and community organizations would also benefit from having the opportunity to hear the stories of these newcomers.

Some of the first performers were refugees from Burma and Rwanda; those graduated a few years ago. Next came refugees from Iraq. Huda Al-Obaidi is one of the Child and Youth workers working with Schulze, and also a Crossing Borders alumna. (The other is Canadian-born Katia Myers; both are supported through a partnership with the Mennonite Coalition for Refugee Support.) Huda was born in Iraq and was just eight years old when the U.S. began bombing her city, Baghdad. Her family fled to Syria. “We wanted to go home but it was all rockets, guns, bombs and dead bodies.” Her gratitude for Canada’s welcome and acceptance is heartfelt.

Over the years Schulze has built a team of about 30 students, plus the two child and youth workers who assist with the presentation and help calm the nerves of the more anxious performers.

“It’s hardest to present to teens,” confides Noura. “I used to be afraid they would laugh at us.” They don’t. In fact, on this particular morning the audience is quiet and focused, and their applause after each song or recitation is enthusiastic. They may have read about the war in Syria or seen it on TV, but hearing the on-the-ground experiences of kids their own age hits home.

Schulze puts together one to three presentations each week, and will select from her team so that no one student misses too much class time. Each year some of the star performers will graduate and move on, and Schulze will coax and cajole new arrivals to take part. As she says: “I have a reputation for pushing people to do things they don’t think they can do. Most people wouldn’t think of putting newcomers on stage, but we do. And they do well.”

Crossing Borders is more than just a performance. Schulze and her students see the impact Crossing Borders has on everyone involved. Close to home, Noura says the teachers treat her differently since seeing her share her experiences on stage, and that kids who never talked to her before now come up and say hi.

Abdul says: “Sometimes we are invisible in school, but after we show our talents and tell our stories, people come and talk to us and we make new friends.”

The student performers are changed, too. Ahmed says Schulze “helped me discover my talent.” Others speak of feeling more confident when they do presentations in class or when other kids ask them about their pasts.

And for the people in the audience, as well as a deeper understanding of the experiences of Canada’s newcomers, there’s a new appreciation for living in Canada. Hearing how much Canada’s welcome means to these refugees, and how grateful they are to live in a peaceful country, creates a sense of gratitude – not just to the country’s commitment to acceptance but to Lynn Schulze, who created the route for these teens to tell their stories. 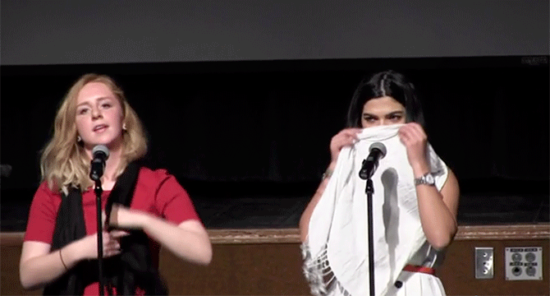 Photo: no credit for this photo

freelance writer and author of books on parenting topics

A Curriculum for Educating Differently