—Dream big, build small, act now: “Build small means try to get this down to an explainable, simple message in everything you do because this has a high potential of being extremely complex. So you’re continually honing that message down to the point where anybody could explain it any time. Because people will do an outstanding job of making anything like this complex.”

—Keep a low profile at the design stage: “We did not involve many people at the design stage. We got [the concept] pretty much refined before it was rolled out and started to involve many more people. Many of the individuals and groups that have visited the CLC tell us their war stories, that the dreamers at the front end are so quick to hold that public announcement. The next thing you know, what they’ve got is a fragmented idea that people are just shooting holes at, and the next thing you know it loses its energy and just kind of falls like a blimp out of the sky.” 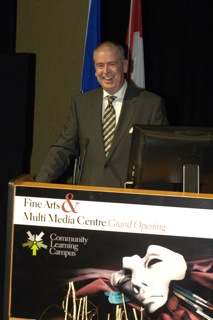 —Take a business approach: “The stark reality was this is going to cost money to get it built and it’s going to cost money to operate it and it’s going to cost money in places that we can’t even envision right at the moment. So rather than blind yourself at the outset to the dream of an integrated learning environment and start calling world-class consultants that will tell you where parts of your dream are presently in operation, and before you start putting people on airplanes and flying them to four corners of North America, let’s get a really good look at some mini-budgets and some overall budgets here of what this thing is going to take (a) to sell it;   (b) to build it;  (c) to operate it. That’s reality.”

–Get 75 percent of the facts and get going: “There’s such a high tendency in our sector to over-analyze something. If you have your realities that you’re talking about, somewhere in there has to be a primary sponsor, and if that primary sponsor just happens to be your provincial government, that provincial government has ebbs and flows. If you know that it is strategically the right time to go with your proposition, you have to take advantage of that, because those ebbs and flows are not a constant, they’re variable, and they have to be taken into consideration in the building of the proposition.” 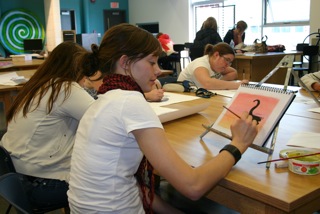 —Attain momentum and don’t take your foot off the gas: “When inflation hit the CLC project as buildings were coming out of the ground, we said we had to have a come-together, we had to sit down, we had to look at it from a business perspective and we had to say, ‘well, here’s the reality: if we don’t fix this ourselves and keep driving this forward, somebody somewhere else is going to pull the plug.’”

—Preserve at least some of your intellectual capital to get you through a lull: “The lesson in there is really founded in your commitment. I think that, for instance, if I had retired or left, and Jim Gibbons left, we might not be having this today. … I don’t want that to sound arrogant. The lesson learned is if you have to go through a lull, hopefully you’ll have some intellectual capital remaining that will help you through the lull.”

George Pearson is a freelance writer and editor. His website, UpWORDlyMobile.com, is an accessible, non-preachy source of grammar and plain-language writing tips.