In 2018, during their 50th anniversary, the Whyte Museum in Banff, Alberta, hosted an extraordinary sculpture exhibit of 100 human busts. Christine Wignall, the sculptor, reflected on her work:

“When I began the project, I thought I would simply start and see where the muse would lead. It wasn’t until I had completed about ten heads that I began to realize who they represented and from where they were coming. My memories and imagination were giving life to the clay and each one of the heads took on the character of someone I had known while growing up… Many of these folks are dead now, a lot of them, but they do haunt my memories. They walked the streets of Banff while the museum was being planned. It is good to remember them all.”

One of the reports on the exhibition stated, “Wignall captured the faces of prominent Banff people… the faces were so full of life” (Szuszkiel, n.d., para. 8). Indeed, the collection was impressive. But when I saw the exhibit with a colleague, what struck me was that 96 of the sculpted busts in the exhibit were those of individuals who had settled in the Banff area. The exhibition included four people from the Stoney Nakoda Nations.

The Stoney Nakoda, comprising the Chiniki, Bearspaw, and Wesley First Nations, are the first peoples in this region. And unlike all the other sculptures in the exhibit, only one of these four sculptures was of a named individual, Walking Buffalo. We wondered, if more people from the Stoney Nakoda Nations were to be included, who might those individuals be. Who were some of the important members of the Nations?

I was fortunate to lead a professional learning and research organization, Galileo Educational Network (Galileo) in the Werklund School of Education at the University of Calgary. Those of us at Galileo had a history of developing research-practice partnerships to engage in professional learning with teachers, principals, and district leaders. Galileo had an ongoing research-practice partnership with the school district in the Banff corridor, focused on nurturing excellence in instruction and leadership, also known in the district as NEIL. In one of the monthly co-design meetings with educators from the school district, we shared our observation about the exhibit at the Whyte Museum. We proposed that perhaps one of the teachers in the district might want to work with one of our professional learning mentors to engage in a project that would involve members of the Stoney Nakoda Nations to learn who from their Nations they considered to be important and to learn their stories. One of the public schools in the school district, whose population is comprised primarily of students from the Stoney Nakoda First Nations, was put forward by district leaders as the one most likely to have an interested teacher. A Grade 4 teacher, whose students were all from the Stoney Nakoda Nations, stepped forward.

The school’s success coach joined the first meeting between the Galileo mentor and the teacher. The success coach, who had worked with the Stoney Nakoda Education Authority for 18 years, brought a wealth of knowledge and expertise to the first design meeting. While offering to assist with the overall initiative, she also stated she could assist with making connections with Elders within the community. It was imperative to us at Galileo that Elders be involved in this project, right from the beginning of the design process. While we had engaged in a number of research-practice partnerships with First Nations communities and Elders prior to this one, this would be somewhat unique as we wanted to invite Elders to collaboratively design (co-design) the classroom activities and tasks with us. Having Elders as co-designers added a new and valuable dimension to this classroom initiative.

As this was not only a professional learning initiative, but also a research initiative, I felt it was important to take a participatory research approach. Within participatory design, the individuals involved in creating the design make a resolute commitment to ensure those who will be impacted by the design be significantly involved in the initial and subsequent iterative work of design (Bødker et al. 2004). In participatory design initiatives, the partners are not merely informants; rather, they are legitimate and acknowledged participants in the design process. In this initiative, the teacher, success worker, and the Elders contributed in all phases of the design work, and throughout all the iterations. As legitimate partners it is important that the participants “be involved in the making of decisions which affect their flourishing in any way” (Heron, 1996, p. 11). For it is through their participation they experience a sense of well being.

At the next meeting, four of the respected Elders from the Nations accepted our invitation to join us in conversation. They agreed to join the initiative; however, when it was suggested they provide the names of members – heroes from the Nations – they were not forthcoming with names. The Elders, although intrigued, spoke of intellectual property, of acknowledging who “owns” the stories and who has the right to hear or to re-tell the stories. They spoke of the disconnect many students have to their own heritage, their families, and their identities. At this point they saw an opportunity that those engaged in the previous design work had not seen. The Elders saw an opportunity for the students to learn about who they are by having them identify their own ancestors and trace who they are related to. The Elders wanted to work directly with the students to help them connect with their culture, their community, and their own families. They were confident they would be able to help each student trace back their lineage to a Stoney Nakoda “hero.” Through genealogy, students would then have the intellectual property rights to the stories of their own ancestors. As the Elders instructed, the students’ ancestors’ stories are their stories.

Over the following month, the teacher worked with the students and their families to identify the names of family members. Most students came back with family trees that extended to their grandparents. Some had more. Some had less. Regardless of what students were able to come up with, it would serve as a starting point for the next step. 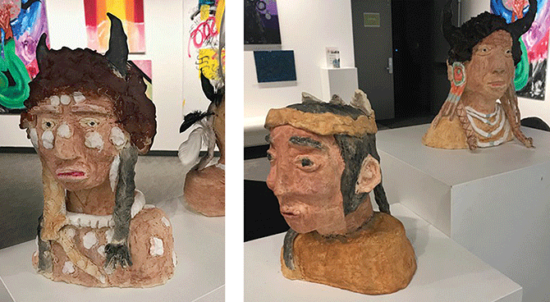 The eight Elders began their teachings with the children with an opening prayer and a sharing circle in which the students were encouraged to speak their names clearly and proudly. The Elders and the children immersed themselves in the important work of tracing ancestral lineages. Speaking with one child, an Elder stated, “You are a descendent of great warriors. Your name comes from your ancestors.” In another corner of the room, an Elder looked at a child and said, “Your great, great, great grandfather was a powerful Shaman. People came to see him from far away because he had supernatural powers. He could heal people.” Where one Elder’s recollection ended, another one carefully filled in the gaps. The conversations and collaboration between Elders and students were a powerful sight to witness. The Elders circled the room going from one student to another, from one family tree to another, helping each other remember when there was a gap that needed to be filled or confirming each other’s recollections. Throughout the day’s activity, the family trees that initially seemed so small were now expanding beyond the constraints of the chart paper. Notes were added to one family tree to show how this student’s lineage continued onto another student’s chart. Elders continually reinforced to the students, “You are family. Get to know each other. Now you need to look out for each other, because that’s what families do.”

We did not end there. The now 11-person co-design team invited Christine Wignall, the artist whose exhibition inspired this project, to join the initiative. While sculpting busts with nine- and ten-year-olds was a bit daunting to her at first, she willingly agreed to accept the challenge. The local Canmore community arts centre, artsPlace, agreed to open its doors to Christine and the children. The children had all selected one of their ancestors as their hero, had learned the stories of their ancestral hero from the Elders, and now they were ready to sculpt a bust of their hero to fill in the missing people from the original 100-head exhibit. The local news media (Lucero, 2019) featured the work of the students, and the public was invited to attend the exhibition of their hero sculptures as part of the National Indigenous Peoples Day celebrations.

I had more than 20 years of experience in research-practice partnerships with teachers and school leaders. However, with this project, I and my colleagues at Galileo had the opportunity to learn how to weave what we knew with the wisdom of the Elders who participated with us to co-design classroom learning for children. It was our opportunity to engage in a process of unlearning – unlearning professional learning and research, and unlearning classroom and curriculum approaches and processes tethered to “colonial logics of relationship denial” (Donald, 2022, para. 8).

What began fairly naively as a school project to connect children with their community grew and surpassed any of our expectations. The Elders brought us into relationship with each other, the children’s ancestors, and historical events that not only shaped this region, but also so many regions across Canada. One of the Elders commented, “Not only was this experience incredibly beneficial for the children, but for the Elders as well.” A number of the Elders noted that as they helped each other remember, they were reminded of stories, family members, and cultural histories that have not been spoken of in some time. As one Elder stated, “This is good for our community.” I would add, this was so good for me as well. I witnessed the ways in which even the best intended curriculum approaches often remain tethered to colonial logics. Opening myself to the teachings of the Elders and being in the presence of their work with the children showed me how to begin the work of unlearning in a good way – a way that honours and respects. Perhaps my unlearning is best captured by the words of an Elder who was such an integral part of this entire project, Elder Skyes Powderface. Elder Powderface has now passed on to the spirit world, but I am left with his words: “This is what reconciliation is all about.”

Sharon Friesen is a professor and President of the Galileo Educational Network at the Werklund School of Education, University of Calgary. Her research interests include the ways in which K-12 educational structures, curriculum, and pedagogies need to be reinvented for our contemporary society.