Ask the average North American teenager, “What are you good at?” and the answer is often, “Huh?” or “Nothing.” Repeated requests can result in annoyed or blank looks. Many young people find it difficult to identify their strengths, or maybe they just find it easier to let someone else do the thinking for them. Of course, some lucky individuals find their talent and run with it at an early age. But many teens that I have taught are unable or unwilling to identify their competencies, their aptitudes and their unique talents. Can teachers change this mindset? Let’s think about it by looking at a couple of examples.

During a conversation with a student of aboriginal descent, I mentioned that my 10-year-old son liked whales. While we were talking, Brandon picked up a pencil and began to draw a stylized whale. In less than five minutes he had created a West Coast work of art that took my breath away. When I praised his artistic talent, Brandon shrugged and said, “Anyone can do it if they try.” Try as I might, I could not convince him that his talent is rare and precious. Although he struggled with other school subjects and left school without graduating, he ultimately found his voice and honoured his ancestry though art. His paintings now command high prices in art galleries around the world.

I’ve observed a similar tendency to under-estimate one’s skills in my own family. When my oldest son Geoffrey was growing up, I was amazed by his aptitude for mathematics. Beginning in his early teens, he delighted in all aspects of mathematics, a subject that I, an English teacher, have always struggled with. On his own time in Grade 10, he developed a website and posted mathematical challenges in what looked (to me) like hieroglyphics. Then he watched as other budding mathematicians, often from far-off countries, solved the problems in different ways. I marveled at the way these neophyte mathematicians communicated fluently through numbers and symbols.

Still, Geoffrey did not think his love of mathematics was anything to distinguish him from his friends in a positive manner. Instead, his peers in public school often labelled him a “geek” or a “nerd.” Until he studied math at university where he met like-minded individuals, his mathematical prowess was not a source of pride, but something to hide from others. If, at age 15, Geoff had been asked what he was good at, he might have mentioned his part-time job in a restaurant, but he would not have identified mathematics as a strength.

From observing Geoffrey’s behaviour, I realized that educators, parents, and friends need to show their appreciation of young people’s talents and validate their successes. I don’t mean insincere praise simply for the sake of raising self-esteem – quite the contrary. People with unique skills and abilities (and, by the way, I believe that includes the entire human race) often don’t know they are talented unless we tell them so. They sometimes feel that anyone else can do what they are doing. Maybe teenagers don’t realize that their aptitude is unusual because they have grown up with it.

People with unique skills and abilities … often don’t know they are talented unless we tell them so.

So what do these stories have to do with assessment practices and sound pedagogy? I’m coming to that. In both examples, a young person found satisfaction by focusing on his strengths. How can educators assess learning in ways that promote success? Let’s discuss what I call “appreciative assessment”[1] to find the answer.

Appreciative assessment, then, is all about helping students find and build on their unique abilities and aptitudes by providing positive, supportive feedback with a focus on capabilities and possibilities. Focusing on an individual’s abilities enables that person to move ahead in a positive manner. True Appreciative Inquiry employs narrative discourse around good experiences to solicit data. Thus, positive stories and anecdotes about best learning practices are the order of the day when implementing appreciative assessment principles in the classroom. When this practice is applied to teaching, educators feel upbeat about the power of their work to effect positive change. This feeling, in turn, reaffirms their commitment to the profession. When it is applied to learning, students feel good about their accomplishments and are motivated to work on their challenges.

A fundamental principal of Appreciative Inquiry is that asking positive questions leads to constructive change. The momentum for such change comes about through communication that creates positive affect and social bonding. The following kinds of questions can initiate discourse and validate the student learning experience:

Such questions can provide the impetus for students to adopt new, previously unconsidered challenges by encouraging them to reflect on their learning.

Catch Them Doing Something Right

In an effort to implement the first principle of appreciative assessment (in the language of Appreciative Inquiry, to discover what is done well) in my own home, I decided to identify something positive about my 13-year-old daughter. The ‘tween’ years were a trying time for both of us. It was hard for me to think of a sincere compliment I could pay her. Then I remembered that Tia has super-sensitive hearing. Even when she is another room, she can overhear someone whispering. I could honestly tell her that she can hear better than anyone I know. Would telling her that she has excellent hearing help our relationship? It was worth a try. When I cautiously told my daughter, “Tia, your hearing is amazing. You can clearly hear and understand conversations the average person cannot pick up,” she was genuinely thrilled. My sincere, appreciative feedback meant the world to her, and our relationship improved, at least for a short time.

I tried this approach again in an office setting. I was not getting along well with a rather obstreperous supervisor, and I wondered how he would respond if I could find something praiseworthy. Although I didn’t like his approach to a recent task we had been working on, I realized he had put in long hours; I truly appreciated the effort he had put in. When I told him so, he first looked surprised and then a smile lit up his face as if it were Christmas morning. I couldn’t help but smile back.

I also saw the power of appreciative assessment in the life of my high school buddy. Brian never earned good grades in school, but he went on to a successful career in Hollywood as a music composer and video producer. When I asked him what led him to Hollywood, he grinned and said, “Actually, it was your dad.” Brian had learned to play guitar when we were attending high school together, and he liked nothing better than strumming out a tune for friends. At lunchtime, after school, and around campfires, we sang along while Brian accompanied us on his guitar. Whenever we had some spare time, we could count on Brian to pull out his guitar and start plucking the strings. Even my father had noticed his passion for guitar playing. One day, Dad said to Brian, “You have a real talent for music. You should make use of that talent.” That comment – a form of appreciative assessment – was a major factor in Brian’s decision to head off on a tour of Europe with a rock band after graduating from high school. Touring with the band was the foundation for what became his chosen profession.

When I first began using the principles of Appreciative Inquiry to guide classroom assessment, I was often surprised at the students’ receptivity. Focusing on the positive empowers people and can create lasting change. The last thing adolescent learners need is empty praise, but a heartfelt compliment can touch even the toughest student.

The last thing adolescent learners need is empty praise, but a heartfelt compliment can touch even the toughest student.

For some ways to change a negative comment to a positive one, see page 8. You will think of other phrasing that is more appropriate for your own teaching style. 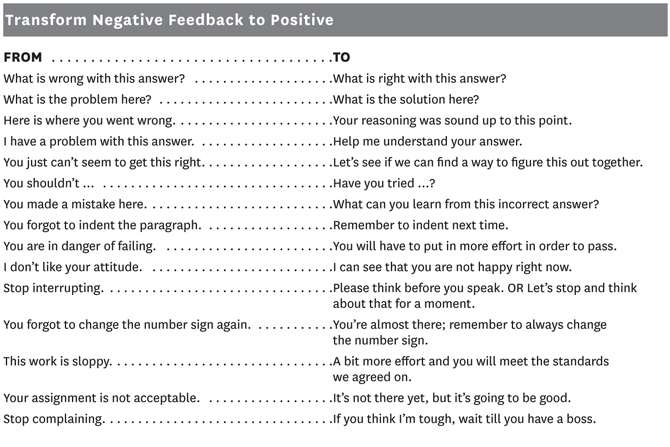 Students benefit from ongoing feedback about their learning, so appreciative assessment utilizes a menu of assessment techniques such as:

Though they can be graded, these forms of assessment do not require a grade; instead, they offer positive, supportive learning experiences for students as well as opportunities to create a dialogue with each other, the teacher, their parents/caregivers, and perhaps members of the community outside the school. We know that learning improves when learners have a sense of what they are setting out to learn, an explicit statement of standards they must meet, and a way of seeing to what extent they have met the learning outcomes. Appreciative assessment adds the social dimension, so learners construct understanding through many different kinds of feedback.

One last example of teenagers having fun with their learning: When our son, Geoffrey, was in Grade 11, he invited his girlfriend over for a family dinner to celebrate her sixteenth birthday. As I stirred the gravy, Geoffrey sat at the kitchen table, poring over sheets of graph paper, intently working on mathematical equations. “Whatcha doing, Geoff?” I asked. “Homework?”

“Naaaaa,” responded my teenage son. “I’m creating Cara’s birthday card.” “Huh?” I wasn’t sure what he meant by that remark, but after dinner I discovered what he had been doing. Amid giggles, Cara solved and graphed four equations. The first line graph was in the shape of a “C.” The second one formed an “A.” Next came one that resembled an “R.” The final equation resulted in another “A.” Geoffrey had created equations that Cara then solved and graphed to form her name – a novel birthday card that reflected their mutual delight in numbers. Cara went on to earn a Ph.D. in chemistry, while Geoff is now in charge of acquisitions for a large corporation. Their early, shared passion for numeracy never left them. Focusing on that strength was the secret to success.

Appreciative assessment reaffirms the power of relationships to motivate, inspire, and ignite passion for learning. It facilitates authentic dialogue between teacher and learner, thus engaging the student, strengthening the learning experience, and perhaps illuminating otherwise overlooked aptitudes. Teachers can readily implement appreciative assessment in classrooms because it is a student-centred approach to teaching, learning, and developing human potential. And isn’t that what our learning communities are all about?

[1] I have not found this term used as I do by other educators, in the context of classroom assessment; however, my research is not exhaustive.

Mary-Anne Neal, MEd, taught secondary school for 15 years and is now an Associate Faculty member of Royal Roads University, where she teaches school principals in the Master of Educational Leadership and Management program, online and face-to-face, in Canada, the U.S. and China.