The potential of digital media to bring about a more equitable democracy won’t be fully realized unless we ensure that all young people have access to high quality digital civic learning opportunities. Teachers can, and should, play a pivotal role in supporting all youth to develop the sense of agency, motivation, and skills to use digital media to participate in democratic life.

In October 2017, Quebec’s National Assembly passed Bill 62, “which bans Muslim women who wear a niqab or burqa from obtaining government services — including [using] public transportation — without showing their faces.”1 In short order, various legal challenges were posed by the Canadian Civil Liberties Union and the National Council of Canadian Muslims. At the same time, Québecois residents who opposed the measure turned to other strategies to demonstrate their solidarity with those affected by the ban – marching in the streets and riding the Metro2 wearing niqabs and face coverings. Another facet of the protest and solidarity movement involved posting selfies3 on Twitter, Instagram, and Facebook with faces fully or partially covered, either with traditional head scarves or with other coverings including motorcycle helmets, sunglasses and winter scarves, and surgical masks. These kinds of online expression show how traditional forms of civic action (like rallies) may be enriched by social media. They also show the potential power that digital tools and platforms have to circulate photos and other content with a civic or political message to a wide audience. Importantly, the potential here doesn’t end with expressing one’s voice; tweets with catchy photos, hashtags or memes can potentially change the conversation. Educators need to pay attention to this landscape as they consider what and how to teach for civic agency in today’s world.

Online tools and social media platforms have become a central part of civic and political life. A recent study found that eight in ten social media users reported that they feel social media platforms “help users get involved with issues that matter to them” and “helped bring new voices into the political discussion.”4 The digital age has opened up new ways to learn about issues, engage in dialogue, circulate ideas to a wide audience, and mobilize others to get involved. Yet, there are also unique challenges: assessing the credibility of online information, recognizing echo chambers and filter bubbles, learning to handle contentious online exchanges, determining potential risks of online content, reaching unexpected audiences, and considering the digital afterlife of one’s tweets, status updates, or snaps.

This digital landscape creates distinct pathways for youth to participate. Young people use social media as the primary way to communicate about politics.5 Despite perceptions that digital media distract youth from civic and political matters, 48 percent reported social media made them more aware of political issues and over 85 percent disagreed with the idea that social media lessened their awareness and commitments. In fact, one study found that 90 percent of youth who engaged in online civic and political activities report that they also vote or participate in institutional activities like letter writing and volunteering for a campaign.6

Digital media expand opportunities for a set of practices we call participatory politics. These practices differ from institutional politics in that they are peer-based and interactive; they tap into youths’ social networks; and they often draw on popular culture. In digital spaces, youth can participate without deference to adult-led institutions and bureaucratic structures that dictate the what, when, and how of civic and political action. For example, youth are blogging, engaging in online discussions, and creating and circulating clever memes and pointed hashtags. They are also using online petition sites like Change.org in order to influence the conversation and, in some cases, legislation around issues such as immigration, racist policing practices, gun control and climate change.

The changing nature of civic learning

Just as democratic participation is changing in the digital age, so should our approaches to civic education. New knowledge, skills, and dispositions are needed to navigate this changing landscape. And just because young people know how to text or tweet, doesn’t mean they know how to use these tools for civic and political purposes. Data from a 2015 survey suggests that only 10 percent of youth engage at least weekly in such online political activities – meaning that 90 percent are not engaged or only occasionally engaged online.7

Therefore, bringing digital civics into classrooms and schools is essential. While this is already happening in some places, research points to an equity gap: youth who are White, from upper-income families, and high achieving academically receive far more of these learning opportunities than others.8 In addition, exposure to digital learning opportunities appears to be both inequitable and low overall. In a 2013 survey, 33 percent of U.S. high-school-age youth did not report having a single class session focused on how to tell if online information was trustworthy, and only 16 percent reported more than a few sessions.9 Therefore, it is critical to integrate digital civic learning opportunities for all youth across grade levels and content areas.

The core practices of digital civics

As educators consider teaching digital civics, we suggest the following framework that parses online civic engagement into four core practices. We also think it is essential to acknowledge the double-edged nature of digital life – the positive opportunities and genuine challenges connected to each practice.

At a time when information flows freely and rapidly from a diverse array of online sources – some credible, some not – it is vital to support youth to be thoughtful and savvy investigators.

Social media provide ample opportunities for youth to share their perspectives on public issues, learn about the views of others, and perhaps even engage in debate. Yet, the risk that conversations will turn toxic may deter youth. Providing youth with strategies and tools for engaging in online dialogue can help them feel prepared.

Online contexts offer nearly boundless opportunities to express and amplify one’s ideas and perspectives on important issues. As with dialogue, these positive potentials bring risks – including surveillance and backlash. Helping youth make thoughtful decisions about where, when, how, and to what ends to express their voices in networked spaces is essential.

The role of social media in supporting civic action is contested. Some describe e-petitions and mobilization via Twitter as “slacktivism” while others see great promise (if not clear evidence) of positive impact. In our networked age, we must help youth understand the potentials and limitations of tweets, likes, and hashtag activism in social change efforts, as well as the enduring role of face-to-face civic practices.

In order to attend to these opportunities and challenges, Nina Portugal and other educators in Oakland Unified School District (OUSD) in Oakland, California integrate civic and digital civic learning experiences into their core curriculum. In one project, Nina engaged her Grade 9 students in learning about various tactics of social change, both face-to-face and online. Students worked in small groups to identify an issue affecting their community and theninvestigate the history, root causes, and effects of that issue. Students then wrote a proposal outlining what they learned, what audience they wanted to reach, and what tactics they would utilize to respond to the issue. Next, students put their plan into action over the course of a week, posting media online using a common hashtag to document their actions. For example, one group of students focused on the negative effects of gentrification on communities of colour in Oakland. They mobilized people to write letters to the mayor and tweeted information about the effects of gentrification at the mayor every day during the action week.

After the week of action, students reflected on the effectiveness of their tactics, what they learned, and what they would do differently in the future. This reflection, along with their proposal and documentation of their action steps, were all posted to their class blog. This enabled students to voice their perspectives and raise awareness about their issues. It also gave other students the chance to read and comment on their classmates’ projects, opening up a dialogue amongst the various groups.

While the project undoubtedly provided students with exciting opportunities to learn about issues they care about, express their perspectives on a public platform, and take action, there is a lot to consider to facilitate such a project. For example, teachers have to navigate a number of concerns – such as juggling all the topics students choose, ensuring students’ work is ready for online publication and circulation, helping students reach an authentic audience, and monitoring the depth and academic tone of students’ comments. However, as Nina describes in a recent blog post, it is all worth it when students have opportunities to express their civic and political views in authentic contexts and to reach an expansive audience.10

Five ways to bring digital civics into the classroom

The Digital Civics Toolkit (DCT) is a new resource that offers educators tools they can implement in the classroom to support their students as they engage with practices linked to participatory politics (see Figure 1). Created by members of the MacArthur Research Network on Youth and Participatory Politics, the DCT contains modules and activities that explore opportunities and tensions associated with participatory politics. It offers five ways to integrate digital civic learning into your classroom. 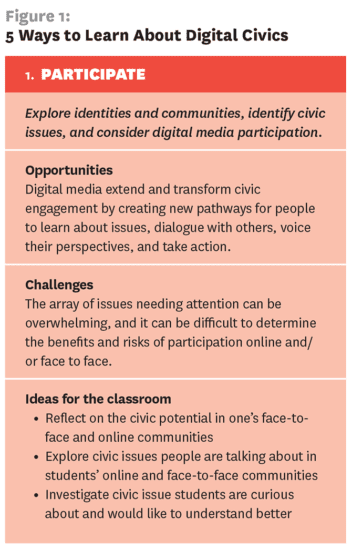 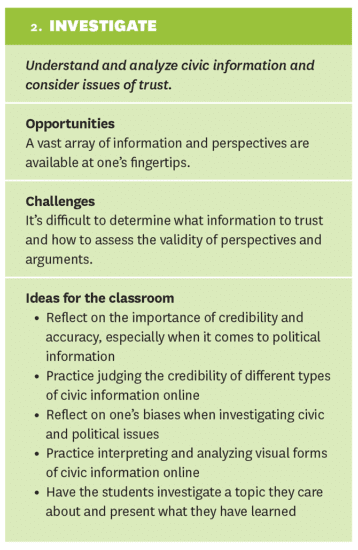 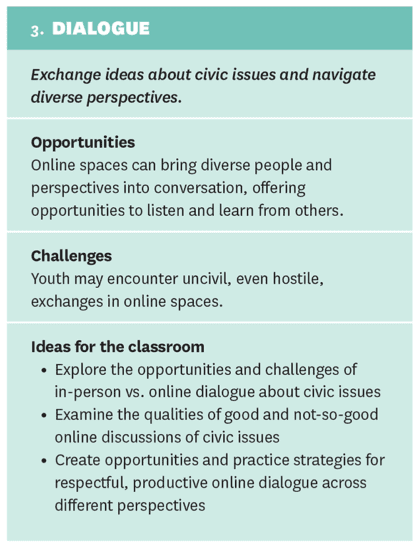 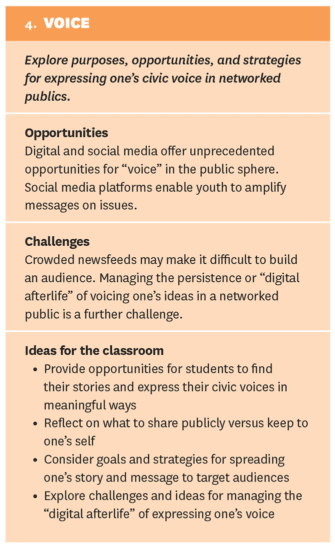 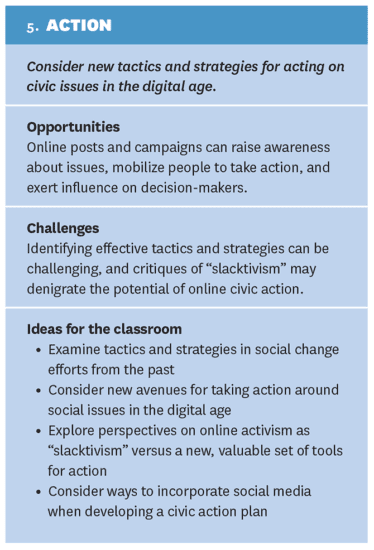 Youth today are growing up in a world in which digital media is not just about socializing with friends. Public issues and social change agendas can be – and are – raised, explored, discussed, and responded to on the Internet. While there are inevitable challenges and tensions, there are also positive opportunities, especially for youth. Further, the networked nature of civic and political life isn’t likely to go away. The potential of digital media to bring about a more equitable democracy won’t be fully realized unless we ensure that all young people have access to high quality digital civic learning opportunities.

Teachers can, and should, play a pivotal role in supporting all youth to develop the sense of agency, motivation, and skills to use digital media to participate in democratic life. And all educators have a role to play regardless of discipline, grade level, and learning context. By teaching digital civics, educators can enable more youth to recognize and, hopefully, seize new opportunities for civic and political engagement that are empowering, equitable, and impactful.

9 J. Kahne, E. Hodgin, and E. Eidman-Aadahl, “Redesigning Civic Education for the Digital Age: Participatory politics and the pursuit of democratic engagement,” Theory and Research in Social Education, no. 1 (2016): 1-35.

10 N. Portugal, “Confronting the Monster Under the Bed: Integrating blogging into the classroom,” Teaching Channel (May 14, 2018). www.teachingchannel.org/blog/2018/05/14/integrating-blogging

Erica Hodgin is the Associate Director of the Civic Engagement Research Group (CERG) at the University of California, Riverside and the Project Director of t...

Sangita Shresthova is the Director of Research at the Civic Imagination Project, based at the Annenberg School for Communication and Journalism at University...

Rethinking the Role of Mathematics Education

A Focus on Human Flourishing