High school student Nick Robertson came to Oasis Skateboard Factory (OSF) from a suburban Toronto district where, he says, “I was being spoon fed the exact same education as parents and grandparents, and that did not fit with me. They tried to diagnose me as ADD, ADHD.” He says his average grade was about 60. He “squeaked by” in Grade 9 and finished Grade 10 “in bits and pieces.”

He was surfing the web when he spotted a reference to Oasis Skateboard Factory, an alternative program in the Toronto District School Board.  He says his first reaction was “Skateboards in school? It didn’t seem possible.” He applied, was accepted and took up residence with a relative in Toronto. He started in September 2011 as a Grade 11 student.

He became immersed in OSF and adopted the brand “Kid Sqwid” for his boards and other artwork. In his previous school experiences, he tried to avoid writing but not now. Nor are there any issues about meeting deadlines. “There is a lot more pressure on us [than in previous school experience] – not negative, but you have deadlines to meet. We have done writing in magazines; there’s a sense of pride that goes with that.” 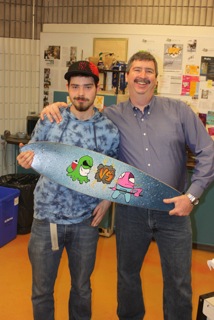 He now expects to return to his suburban Toronto high school in January, a move he sees as a “lot easier” after his OSF experience. “I can get a lot of work done. I have learned to cope with deadlines; it’s been really good practice.”

“One of the main things about this place is that I can actually draw and not feel like I am doodling away and being yelled at for drawing on the side of my notes,” he says. “[Drawing] is an actual talent I have that can be used.”

Jake Skinner, 19, attended a high school in a suburb east of Toronto. By Grade 12, he was still six credits short of graduating and unhappy at a school he felt was too impersonal. “They are not trying to teach you; they are talking at you like a wall,” he says. He discovered OSF through an aunt who lived within the Toronto District School Board catchment area and now stays with her while attending OSF.

He is thrilled about his school experience at OSF. “One of the main things about this place is that I can actually draw and not feel like I am doodling away and being yelled at for drawing on the side of my notes,” he says. “[Drawing] is an actual talent I have that can be used.” Having learned the business side of art at OSF, he now plans to apprentice at a tattoo shop and start his own business. 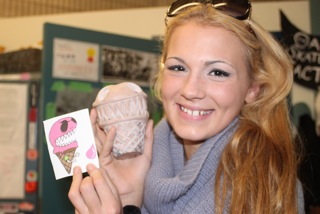 His parents, John and Kimberly Skinner, were “thrilled” to discover a school where their son could pursue art.  When she attended an open house early in the school year, Kimberly Skinner says, “Craig couldn’t say enough good things about Jacob, [including] his maturity level and his leadership skills. I thought, ‘are we talking about the same boy?’” John Skinner adds, “[In the past] a teacher meeting would start with an apology. This was different.”

Jake received a scholarship to attend a course at the Ontario College of Art and Design (OCAD). After that, says Ms. Skinner, “who knows? We got through high school and that was a big step.”

At her previous school, Carly Bond, 17, often skipped school and finally got kicked out. She credits her then-school guidance counselor for recognizing her preference for hands-on learning and recommending she attend Oasis Alternative Secondary School.  Then a friend suggested OSF, one of three Oasis alternative schools.  Carly says she “fell in love with everything” at OSF, including “how all the projects are not fake.” Moreover, she says, “now that I know my project is going somewhere and being sold, I am going to work really, really, really hard on it because of that.”

“I go to school because it is giving me experiences of what I want to do with the rest of my life.”

She stayed at OSF for three semesters. In her final semester last spring, she did a job shadow with street artist Slurg, who makes model toys. Carly has made her first toy, Snapper, a “man-eating ice cream cone.” She eschews “sexist” toys such as Barbie and says she will create “more playful and creative toys, not just a girl with clothes.” 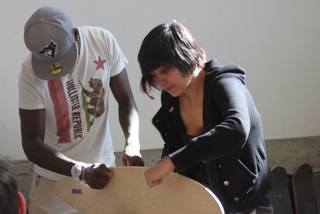 She still needs more credits to graduate but doesn’t want to go to school just to get credits. “I go to school because it is giving me experiences of what I want to do with the rest of my life.” Her parents, she says, “are really happy. I used to be a bad kid when it came to school. Now I get better grades than my sister or brother.”

At the Toronto District School Board, Karen Grose is Central Coordinating Superintendent of Strategy and Program Planning and has oversight responsibility for the system’s alternative schools. She is clearly impressed with OSF. “The anecdotal comments from parents and from students and from staff around the Skateboard Factory [show] they’re positive, they’re passionate,” she says. “It’s just inspiring.”

Does the TDSB intend to replicate it? “It’s only just three years old, she reflects, “but I think we have enough data and enough understanding of the success of this program, the passion that the students have for this type of learning to know that these are the types of things that we need to move forward with. We’ll explore possibilities for where Skateboard will go next. I think there are a number of possibilities.”

OSF teacher Craig Morrison gives much credit to Ted Hunter and Norah Jackson, co-owners of Roarockit Skateboard Company, for their close participation in the work of the alternative program. Mr. Hunter is a fulltime professor at OCAD specializing in furniture design. His wife, Ms. Jackson, comes from a graphic arts background. Mr. Hunter has a special feeling for the OSF students whose learning styles often don’t fit well in mainstream schools. “That’s exactly how I went through school,” he says. “Finally for me it was one teacher at the end of high school who said ‘boy, you’ve got to go down to the Ontario College of Art and take some courses.’ That one teacher totally changed my life. That’s the way Craig is.” 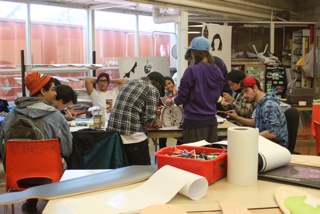 For their business, the couple invented a kit that enables youths – or anyone – to build a professional-quality skateboard, a key starting point for activities at OSF. As well, the two have worked side-by-side with Mr. Morrison during the school year to sponsor social events (part of the program’s student engagement strategy), mentor OSF students engaged in higher-level skateboard builds and coach advanced students to become instructors for Roarockit workshops.

George Pearson is a freelance writer and editor. His website, UpWORDlyMobile.com, is an accessible, non-preachy source of grammar and plain-language writing tips.