Canada has one of the most fully developed systems of general formal education in the world. There are diverse and relatively accessible programs of studies from early Kindergarten to post-doctoral university levels. By international standards, the quality of many of these programs is outstanding, as confirmed by the recently released OECD Programme for International Student Assessment (PISA) tests for reading, mathematics and science.1 The proportion of Canadians who have completed a post-secondary university or community college program is among the highest in the world. Canadian school systems still have a lot of room for improvement on equity issues, but in terms of general levels of participation and quality of provision, they have few current peers.2 In addition, it is well documented that Canadian adults are very active lifelong learners, spending much more time in informal learning activities than organized formal education.3 But the Canadian apprenticeship system is quite a different story.

In stark contrast, the Canadian apprenticeship system has had relatively low participation rates and low completion rates. There is long-time agreement among policymakers that there have been chronic shortages of certified skilled trades, and public opinion surveys consistently show that the majority of Canadians want to give among the highest funding priorities to apprenticeship programs.4

The German apprenticeship system has frequently been suggested as one Canada could emulate.5 According to recent estimates, about half of Germans in their 30s have completed an apprenticeship. Most of these start at high school age, with extensive information about a wide range of occupations – and placements into them – available through school-related agencies and networks of employers. The vast majority of apprenticeships are completed and most lead to permanent jobs. Most Canadian apprenticeships begin after high school is finished, when both information and placements remain fragmented, and completions are probably less than half. So, only around ten percent of Canadians in their 30s have completed apprenticeships. (See Figure 1.)While there are many differences between German and Canadian apprenticeship systems and both systems are changing, it is reasonably clear that the Canadian system has a lot of room for development.

On the other hand, Germans in their 30s are only about half as likely as Canadians to have university or college completion. So, it could be argued that many Germans are being denied opportunities to reach their full educational potential by early selection into specific occupations, however effective their apprenticeships are. The bottom line for Canada is that there is great potential for closing the apprenticeship training gap by providing more opportunities for practical job-related training in conjunction with our current high post-secondary educational levels.

It is reasonably clear that, whatever decent jobs are available in the foreseeable future, more of them will involve working with knowledge rather than handling material goods – the much heralded “knowledge economy.” Since the 1980s, both industrial trades and clerical, sales and service jobs have been declining, while professional and managerial jobs have grown greatly.6 Rapid increases in popular demand for, and completion of, post-secondary education reflect public awareness of these employment changes. But there is a serious and increasing disconnect between advanced education and jobs. There are now many more highly qualified graduates than jobs with matching requirements, a condition we call underemployment or over-qualification. Canada has one of the most underemployed labour forces in the world. Of course, in a dynamic market economy, there are continual technological changes that call for new technical skills. But with Canadian students and workers continuing pursuit of new qualifications and informal lifelong learning, specific skills gaps do not last long and their underemployment continues to grow.7

One response to this condition would be to narrow access to post-secondary education. While this might now appeal to some short-sighted, austerity-minded elites, denial of educational opportunity is never a good idea and it would also fritter away Canada’s current leading post-secondary education position. Much better to find ways to close the gap by improving the linkage between advanced education and 21st century jobs.

The most effective means of linking education and jobs has been apprenticeship. Prior to the era of industrialization and mass schooling, most work-related learning occurred on the job from others who had already mastered it. In countries with well-established skilled trades apprenticeship systems, like Germany, these systems became integrated with emerging school systems. In Canada, we relied for a long time on importing skilled trades from abroad while schooling developed quite separately. The technical skill-focused programs in high schools had little connection with relevant job experience.

The relatively small apprenticeship programs in Canada and the U.S., generally with poor linkage to the educational system and low completion rates, have changed only gradually. This contrasts with more rapid evolution and expansion in countries like Germany, Australia and England to many occupations beyond the dwindling numbers in traditional skilled trades. Canada may now finally be producing more auto mechanics and plumbers on a per capita basis than Germany, but Germany is producing far more apprenticed IT professionals, health technologists and other knowledge workers better matched to the growing numbers of knowledge economy jobs. We are producing plenty of potential knowledge workers through our universities and colleges, but without effective linkage to apprenticeship experience, many of their skills are wasted: nearly 50 percent of clerical, sales and service workers in Canada are now underemployed and their skills are unrecognized by their employers. There is also serious continuing underrepresentation of women, visible minorities and immigrants in apprenticeships. All these conditions cry out for coordinated national action.

An anemic apprenticeship system is not the only reason for the large gap between educational qualifications and workplace utilization in Canada. A branch-plant economy focused on extraction and export of raw materials rather than more complex value-added jobs has been a factor. Governments responded keenly to popular demand for more post-secondary education programs in the simplistic belief that such educational investment would naturally lead to job creation – it did not. Antagonistic workplace relations led employers’ organizations with similar faith in human capital investment for job creation to encourage the production of large numbers of highly qualified potential workers – perhaps also in the hope that their presence as a “reserve army” would serve to discipline already hired workers. Unions in this context found little chance of working with either employers or governments cooperatively to determine working conditions or workplace training programs, as was the case for many years in Germany’s “co-determination” model.

But all of these conditions are changing in Canada – with growing recognition of underemployment of post-secondary graduates, the evident need to “harness” the talent of more of these highly qualified people for a “knowledge economy” and an increasing level of organization of professional employees into unions and associations to contend for greater recognition and reward for their skills. The need for an apprenticeship system linking workplace experience more fully and effectively with both high schools and post-secondary institutions is becoming painfully obvious to anyone who cares to look closely at education and work in this country.

Many people now recognize the value of linking formal schooling and job experience. For many years, some of our universities have reached out to networks of employers and developed effective programs integrating schooling and work in applied fields like engineering. Most community colleges now have administrative departments established to aid in providing practical job experience for students. There have also been increasing efforts to provide pathways to apprenticeships via high schools (e.g. Co-op Diploma Apprenticeships in Ontario). Individuals are making increasing efforts to find more effective pathways to jobs – more university graduates are going to community colleges to acquire technical job skills, for example. In sum, there are increasing numbers of largely ad hoc efforts at all levels of the education system to find means to ensure needed job experience for prospective graduates, but most have proven temporary and difficult to sustain. Coordinated initiatives to further develop the apprenticeship system in this country continue to suffer from a lack of commitment by employers, labour unions and governments. At the same time, there is probably no other public policy issue on which there is currently greater declared agreement between the general public, employers, unions and governments across this country than the need for a more fully developed apprenticeship system for more effective preparation for 21st century jobs. There are working models all around us. They have to be more effectively organized and expanded. But that is a task that neither Canadian employers, unions nor governments are inclined to own at the moment.

Employers, unions and governments have alluded ad nauseum to an array of barriers preventing growth of our apprenticeship system much beyond 50 odd Red Seal trades recognized since the 1960s. Familiar factors include: regional economic differences, inequitable funding responsibilities, overly complex administrative processes, low status of apprentices, and parental bias toward more academic programs. All of these may be valid from the standpoint of current vested interests. But all are also directly surmountable through concerted action such as: 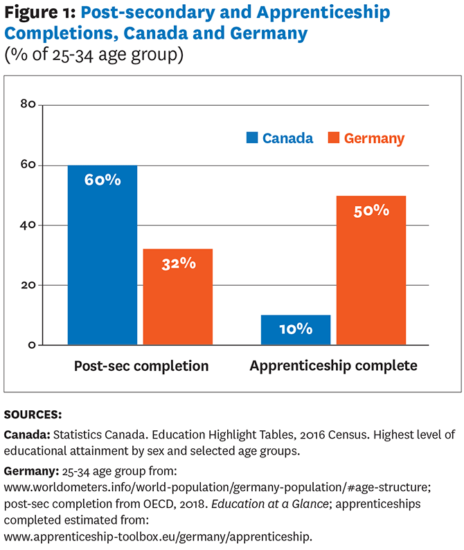 A more fully developed apprenticeship system would not be a panacea for all education-job transition problems, but it would ensure more effective transitions from school to work for many and reduce underemployment for large numbers of post-secondary graduates. We have seen exceptional personal efforts by Canadian young people in recent decades to invest in higher education. They deserve decent jobs to use their achieved qualifications for the good of themselves and society. Canadian employers, labour unions, governments and the highly educated general public all now increasingly recognize the value of apprenticeships. Concerted efforts by our governments, employers and unions are needed now. Let’s do it.

5 For an extensive comparison of the Canadian apprenticeship system with Germany, England, France, Australia, the U.S. and several other countries, see Erica Smith and Ros Brennan Kemmis, Towards a Model Apprenticeship Framework: A comparative analysis of national apprenticeship systems (Geneva: International Labour Office, 2013).

D. W. Livingstone is past Canada Research Chair of Lifelong Learning and Work and Professor Emeritus at the Ontario Institute for Studies in Education at the University of Toronto (OISE/UT), and editor of Education and Jobs: Exploring the gaps.

Milosh Raykov is Associate Professor at the University of Malta and co-author of studies in the domain of high school apprenticeship and early school leaving.

What’s standing in the way of change in education?