Months of planning, combined with an early alarm on the day of the event accounted for the weariness. The positive energy and feedback that organizers received before, during and after the day inspired the excitement.

Months of planning, combined with an early alarm on the day of the event accounted for the weariness. The positive energy and feedback that organizers received before, during and after the day inspired the excitement.

And the intrigue? Well, the intrigue came from a realization that, by all accounts, what happened on Saturday in Toronto was another in a long line of successful EdCamp events held across North America over the past several months. Something is definitely happening here, and that something is worth our attention.

What would encourage close to 70 people—teachers, parents, community activists— to leave their homes on a blustery Saturday morning to attend an event that promised no notable keynote speakers, no recognizable workshop offerings and no promise of publisher prize bags?

Yet, that’s exactly what happened in Toronto, what happened in Vancouver, British Columbia and Quinte, Ontario. It’s what is about to happen in Montreal, Quebec and Edmonton, Alberta in just a couple of weeks. And from my perspective as one of the organizers and one of the participants, both the appeal and the success of EdCamp comes down to being able to have the conversations that participants really want to have. 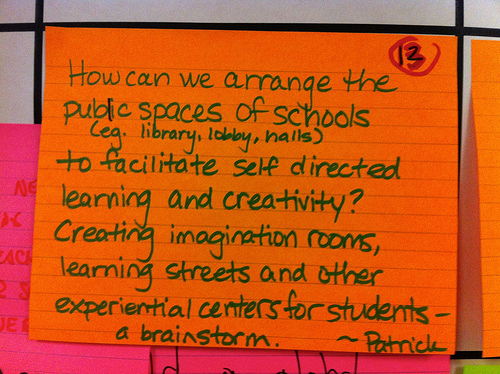 The EdCamp concept relies on the fact that those that arrive at the registration desk do so with background knowledge, expertise, perspective AND a willingness to share that with others. In fact, the most exciting part of the two EdCamps in which I’ve had the opportunity to participate has been the opening hour where people gather, meet, post their questions and “vote” on the topics that most are most engaging to them.

As people head off to their first sessions, a little bit of hesitation hangs in the air, but that is transformed during those initial conversations as participants begin to understand that there has truly been an open space created for honest, authentic dialogue about what matters most to them.

And trust me, I’m not the only one gushing about this stuff. During the day, the #edcampto hashtag was on fire with comments, questions from both inside and outside the event. In the halls between sessions and over the lunch hour, the conversations continued, and new ones were started. And in the days following EdCamp Toronto, participants like Cat Lee, Michelle Horst and Andy Forgrave began to share their experience, each in a different way.

So, what are we learning as EdCamps begin to spring up across the country? What is really going on here?

I think, at its most fundamental level, the EdCamp concept and format gives voice to the passion and energy that exists at the grassroots of this profession. It speaks to the need and the desire to engage teachers, administrators, parents and community members in the types of conversations into which we’re not traditonally invited. It’s about stepping away from the agendae that have been set for us by ministries of education and other politically-motivated bodies to create a place for alternative ideas and alternative priorities.

On its own, EdCamp Toronto was a powerful day of conversations with those who care about what is happening in our schools. But when coupled with the other EdCamp events happening across the country, it becomes possible to identify this as a movement! It’s a movement energized and enacted at the grassroots level and, if early feedback is any indication, it’s a movement that will grow, representing an alternative way of talking about education and citizenship within this place we call school.

Next: Gathering the EdCamp threads from across Canada