Why should we continue to deliver science education in our schools if we fail to recognize the fundamental importance of sustaining the very systems of this planet upon which humanity critically depend? Allow me to be absolutely clear on this point – the human species is presently on a trajectory that could have globally catastrophic outcomes; science education has a role to play in altering that trajectory and so presents an explicit reason to change our approach to education in the sciences, and soon.

The search for a “Canadian” science

The last episode of looking in-depth at the state of science education in Canada took shape in the late 1970s and the early 1980s. That period almost certainly received some degree of inspiration from the Symons Report of the Commission on Canadian Studies released in 1975. The title of the report – To Know Ourselves – was telling, recalling the Delphic maxim from Plato as he wrote in the Republic that to “know thyself” transcends the individual and relates also to the life of the individual functioning in the larger society. The report was a sweeping manifesto which echoed the patriotism felt by many Canadians after our centennial celebrations.

The Symons Report identified such an urgent need to focus on the perceived lack of a Canadian perspective in science education and technology that it devoted an entire chapter to this one discipline area alone. A subsection of the Commission report titled “Is There a Canadian Science?” provoked a spirited debate among the Canadian scientific establishment with the suggestion that the universality of scientific achievement might also bear the marks of a uniquely Canadian character and culture. Symons’ argument reflected a perspective shared by many at the time: “Science in Canada can be simultaneously international and Canadian in the sense that it is approached from a Canadian viewpoint, it fulfils a particular Canadian need, or it is related to a particular Canadian interest aroused by location, geography, climate or by some other distinct feature of the country.”

It should not be surprising that the science of sustainability is of essence to be integrated through the disciplines. On what alternate grounds would the future of science education rest?

The Science Council of Canada’s groundbreaking 1984 release of Science for Every Student: Educating Canadians for Tomorrow’s World is now 30 years behind us.1 In addition, some 20 years have passed since the Council of Ministers of Education, Canada initiated the process culminating in the Common Framework of Science Learning Outcomes K-12 of 1997, which provided a number of Canadian provinces with the basis for new science curricula (variants of which are still in use today). Given the growing influence being felt from the STEM (science, technology, engineering and mathematics) movement in recent years – a decidedly American influence – I felt that the timing was opportune for a national scan, not of the present state of play in science education but a consideration of its future.

Centuries ago, at the Temple of Apollo at Delphi in Greece, it was customary for influential members of society to pay a visit to the Pythia, the priestess charged with summoning the messages of the gods and delivering “oracles” about the future. The difficulty with these pronouncements was that they were always delivered as an obscure riddle with two possible outcomes – a great success or a catastrophic failure. It was the interpretation of the recipient that determined the outcome.

In recent decades, Delphi has come to represent a widely used research method – particularly in instances where a large-scale, complex problem is addressed. Originally used in classified Cold-War era research, a Delphi panel gathers expert opinion on a subject or issue from a group intended to be representative of those who should typically have a say in the matter. With the advent of the Internet, we can now pull together an online panel of experts, creating a group that is diverse in expertise, experiences, character, and geography. Moreover, many of the traditional pitfalls of face-to-face deliberations are mitigated by this research method, which preserves the anonymity of the participants while at the same time allowing for the free flow of discussion.2 In recent years, Delphi studies of the expert community have become rather common in educational circles and this methodology seemed a very good fit for a study of the future of Canadian science education.

Over a five-month period in early 2014, an expert panel convened online for a series of deliberations. The membership included curriculum specialists from provincial/territorial education departments, award-winning K-12 science teachers, faculty from Canadian universities in the sciences, engineering and education, industry scientists, and the science media. The process was initiated by lengthy, free-form written responses to four “seed” questions. These questions grounded the research in four areas thought to have high levels of effect:

Once I had examined the remarkable diversity of opinion expressed in the panel members’ responses, a series of questionnaires were developed which asked the panel to rank in order of importance the dominant themes across the four questions. Not only was the panel contributing to a broad consensus on priority areas for science education, each was also asked to provide a justification for their respective positions. Between questionnaires, each member was provided with summaries of the group responses prior to the next round of deliberations. This is the custom in a Delphi study, in the hopes that consensus positions will emerge as each member is provided with the thinking of the others involved in the study. The process stops when it appears as though the positions of the panel have solidified, but not always with consensus achieved.

The sustainability sciences – a new orientation for Canadian science education?

If there was a common thread making its way through the deliberations of the national panel, and one which appeared and re-appeared across responses to the four questions framing this study, it was this: Sustainability of the planet’s systems and humankind’s relationships with, and influences upon, those systems rises to the top of the list of priorities for science education in this country. No less important, the panel encouraged a priority on making strong connections among the pure sciences, sustainability issues, socio-scientific issues, and the relevance of the curriculum for students. An appreciation for the interconnectedness of these important threads, they felt, could be the foundation of a Canadian understanding of science in today’s world.

In short, the emerging consensus proposed a comprehensive and complete re-orientation of science teaching and learning among Canadians. The result would be an approach I like to call “the circumpolar curriculum,” one that appeals to the context of Canadian society, its demographics, its geographic diversity, its traditional knowledge base, and its position internationally as a northern nation of changing influence. As one panel member described it:

“It should not be surprising that the science of sustainability is of essence to be integrated through the disciplines. On what alternate grounds would the future of science education rest? Concerns about sustainability, health, energy, food security and water are examples of significant issues that face today’s societies and must involve both curriculum policymakers and the requirement of action. The issues are massively interconnected.”

If we were to list the qualities which should characterize science education in Canada for the next couple of decades, and do so on a priority basis, the national consensus from this panel would group these into two distinct sets of priorities which should invite a contentious debate. Figure 1 summarizes these priorities: 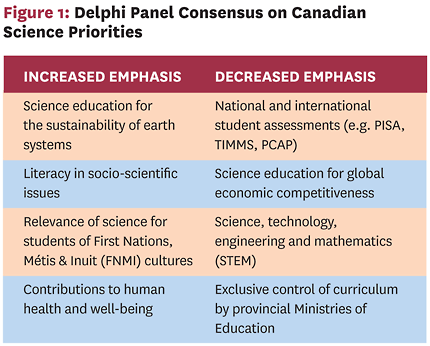 When asked to describe the nature of science education as it could be practiced in Canada, much of the commentary from the panel pointed to maintaining the traditional strengths we have enjoyed in areas such as socio-scientific issues and broad literacy in science, but now embedded in a sustainability focus. One new element is the explicit demand to focus attention on our founding peoples’ aspirations, with an eye to explicitly advancing this aspect of a circumpolar approach to science. One panel member described it eloquently as follows:

“The involvement of Indigenous peoples in science education is paramount. Indigenous philosophies, ways of seeing the planet, and defensible and de-colonizing pedagogical practices need to be central to the development of science education among our communities. This is essential if we are to foster greater Aboriginal student engagement in the sciences… learners who often have to engage in ‘border crossing’ in order to ‘feel’ what science is to them. In Canada, there is a critical underrepresentation of Aboriginal people going into science-related programs at the post-secondary level. This has an impact on their ability to participate fully, knowingly having a Canadian voice, and be representative in the world’s scientific communities on an equitable footing.”

Encouraging a new view for science education with the sustainability sciences as its hallmark will require a new understanding of what the term “sustainability” means to the science curriculum. Sustainability focuses on the reconciliation of society’s rapid pace of development with the planet’s environmental limits as laid down by networked systems operating on the time scale of geology, not human life spans. Sustainability science is not, then, exclusively focused on environmental science but recognizes that conducting science outside of environmental, citizenship and cultural contexts is neither remotely conceivable nor possible. That is, science (and education) are inescapably embedded within the environments in which it occurs.

We can now envision a new model for science education with sustainability science at its core, which builds on the emphases identified by the Canadian educator Douglas Roberts about three decades ago (see Figure 2, Visions I and II) to add a third dimension (Vision III) inclusive of Indigenous views – thereby strengthening Canada’s role as a circumpolar nation while simultaneously working to de-colonize the curriculum. 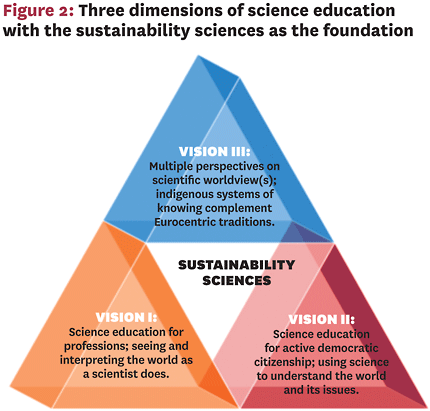 Nature and society mutually shape one another, and therefore sustainability science provides for balanced attention to how society alters the physical environment and how the state of that environment shapes society. There is perhaps a no clearer and more provocative vision for a truly Canadian science education, than one that could develop the knowledge, skills and attitudes necessary to attaining a more habitable planet for all.

2 For a comprehensive treatment of the Delphi research method, including many sample studies, see Linstone and Turoff (2002), available online at: http://is.njit.edu/pubs/delphibook/

3 The complete national study by the author is available online at http://hdl.handle.net/1993/30080 or directly from the author at: murrayjo@brandonu.ca

John J. Murray, PhD, now jointly in the Faculty of Education at Brandon University and the College of Medicine of the University of Manitoba, has been a science educator for more than 25 years. He has a keen interest in the history (as well as the future) of science and mathematics education, and is currently working on a new book exploring how the advances in astronomy by Galileo Galilei and Johannes Kepler were deeply rooted in their practices in astrology.