It was the first week of classes and the Chemistry 11 students were busy reviewing the core concepts from junior science. Most students were sailing through the review because of the strong junior science program in our school. Randy, on the other hand, was a different story.

It was the first week of classes and the Chemistry 11 students were busy reviewing the core concepts from junior science. Most students were sailing through the review because of the strong junior science program in our school. Randy, on the other hand, was a different story.

Randy sat staring at the blank pages of his workbook. I asked him if he needed some help. He explained to me that he was a recent immigrant to Canada, didn’t speak English that well, and had never learned any of the chemistry I was trying to review. I showed him some things that our students learned in Grade 9, and it was obvious that he had never seen these concepts before. It was all new to him. Ideally, Randy would have spent a semester in a junior science class before being placed in Chemistry 11, but with already full classes, this wasn’t an option for him.

Many years ago, I developed a comprehensive workbook complemented by a website. On the site, my students had access to supporting PowerPoint notes, examples, and workbook answers for both Chemistry 11 and 12. Although my Chemistry classes had been very successful following this system, I found that I had a group of students who were getting perfect marks on their workbooks but failing the tests: a direct result of copying. I felt like there must be some other technology out there that could help eliminate the copying issue while supporting the learning of all of my students. After much searching, a colleague of mine suggested that I try Moodle (the acronym stands for modular object-oriented dynamic learning environment), an online learning management system. The rest was history.

When I met Randy, I had just introduced the Moodle to my classes. I hoped that this added support would help him learn the concepts that he had missed from Grades 9 and 10. I asked Randy if he had a computer at home, and he told me that his family could not afford one at the present time. I asked him if he was willing to spend lunch and after school using the computers in my classroom. Randy was happy to get this opportunity, and he showed up at lunch and after school every day for the rest of the term. At the beginning of each visit, I would spend 5-10 minutes showing him how to do a few things, and then he would work for the rest of the time on his own, practicing and learning the concepts using the Moodle Practice Quizzes that I had developed.

While the Moodle has many functions, I primarily utilize the quiz function to provide all of my Chemistry students with online practice quizzes. I started by creating groups of 30 to 60 high-level thinking questions for each prescribed learning outcome. The student can sign in and access lesson notes or write quizzes with any device that browses the Internet: a computer, Smart TV, tablet, or phone. Each quiz is intended to be a formative assessment. As they submit each question, they are given feedback. For any part of a question they get correct, they get positive reinforcement and full marks, and for any part of a question they get wrong, they get a small deduction, corrective feedback, and a chance to correct their answer. The grade automatically goes into the student’s grade book as soon as they submit the finished quiz; however, they can redo the quiz with new randomly assigned questions as many times as I set the Moodle to allow, and the highest grade is recorded in the grade book. The student can see the grade improvement in real time as reattempts are submitted. This constant formative assessment allows them to excel in their learning. The students can also choose how much practice they need, which individualizes the quantity of practice for each student. Where Randy chooses to do every quiz four times, other students who learn more quickly or have a stronger background in Chemistry may choose to do each quiz once or twice.

Randy really struggled at first because everything he was learning was new. It was a long process, but the Moodle guided him and kept him progressing without frustration, and as time went on, he learned all of the junior level concepts that he was lacking as well as the new concepts from Chemistry 11. In the end, Randy scored 78 percent on the Term 1 Comprehensive Exam.

Runze, on the other hand, was the top Chemistry 12 student in our school. He had a massive appetite for learning and a tenacious work ethic. He did each Moodle practice quiz four times so he could expose himself to as many different types of questions as possible. He loved the Moodle because it allowed him to perfect his knowledge and skills by providing him with so many opportunities to learn. In the end, he was the only student in the school to score 100 percent on the Chemistry 12 Comprehensive Final Exam. Runze thanked me with a letter: “I loved Moodle and all of your engaging slideshows. They made my time in Chemistry class easier and very enjoyable.”

The Moodle keeps statistics on all of the work students do. Students will walk into my Chemistry 11 or 12 classes, start up a computer, and open a practice quiz that they attempted the night before for homework. They will ask me about questions that they have flagged for review. I can individually review with the student or have a class discussion about the problem. I realized very quickly that a lot of effort was going into learning at home. The night before a Chemistry 11 test, I saw that there were 200 attempts on a 50-mark practice test. That is 10,000 learning interactions where students had feedback at every interaction. Most amazingly, I was not directly required for this part of the learning.

After using Moodle for a few years, I noticed some dramatic improvements in student achievement. In Term 3 of 2013, three Chemistry 11 classes wrote a comprehensive exam on the Moodle instead of on paper. I noticed immediately that there were many A’s on this exam. I was surprised to see that fully 50 percent of the students scored 86 percent or higher. I had never in my 31 years of teaching had so many A’s on a Term Comprehensive Exam. I compared the exam to some of the previous paper exams and reaffirmed that it did cover the same curriculum, and in fact, it was slightly more difficult. I looked back at my recent records and found that in 2009, one of my best pre-Moodle groups had 34 percent A’s on a very similar exam. I decided to compare the two groups, and after crunching the numbers in Excel, this is what I found. (Also see Table 1.) 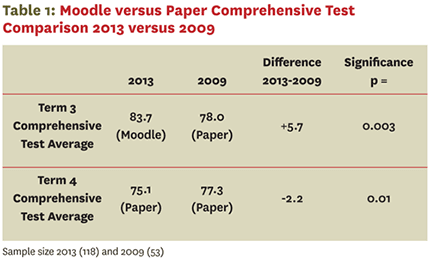 In Term 3 (2013), students in Chemistry 11 used the Moodle for practice quizzes and scored an average of 83.7 percent on the Term 3 Comprehensive Exam. The test difficulty level and lesson pedagogy were very similar to that of 2009. The 2009 students were a high-achieving group that averaged 78 percent on the paper version of this exam. The Moodle group scored 5.7 percent higher. This difference was surprising given that in Term 4, when both groups had identical instruction and no Moodle, the 2009 group outperformed the 2013 group by 2.2 percent. I can see no other explanation for the high marks for the 2013 group other than Moodle.

The plethora of statistics the Moodle collects made it very clear that students who work hard doing the practice quizzes do extremely well on tests and those that don’t, do poorly. The Moodle statistics indicated that those students who continued to practice until they had a high grade on their 14 practice quizzes (effort to learn) also scored high marks on the Term 3 Comprehensive Exam, while those who scored low on the practice quizzes scored low on the exam. The correlation between practice quiz mark and Term Comprehensive Test Grade was significant (r = 0.80). This is interesting in that IQ or other measures of ability and science test marks typically correlate with less relationship (r = 0.30). This strongly suggests thateffort is more important than ability in predicting Chemistry 11 exam marks. I now tell my students with a high degree of certainty that if they work hard on Moodle, they will very likely score high on the test.

A comparison of the grade distributions of Moodle learning versus paper/website alone shows that the Moodle group was skewed toward the higher letter grades in all categories. The A’s increased from 34 percent to 50 percent. The failure rate decreased from 4 percent to 1 percent. With 15 computers available in my classroom, several more available in the school Library, WIFI in the school, and the new phone browser found in Moodle 2.5, there were very few students who had issues finding the technology to access the Moodle.

What is it about Moodle learning that allows students to demonstrate greater achievement? Three of my four children were competitive swimmers, and their coaches constantly drilled into them: “Perfect practice makes perfect.” Technique is everything in swimming, and if the swimmers do not practice perfect technique, they will not improve. The Moodle does not let the students get away with doing something incorrectly. They are corrected on every step of the learning process and given positive or corrective feedback. After working with many students on the Moodle, I have become convinced that it’s actually easier to learn to do things correctly than not. Each concept often builds on the previous one, so continually learning things correctly prevents learners from becoming overwhelmed or frustrated by assignments they cannot do, and leads to continuous improvement. Indeed, perfect practice does make for perfect learning.

Mark Iannone, BSc, MA, has been teaching chemistry and science for 31 years at W. J. Mouat Secondary School in Abbotsford B.C. He has developed an Online Learning Environment for Chemistry 11 and 12 using Moodle technology.