Play: It’s a word most people use without much forethought. We have all engaged in play at some point in our life, so we know what it is, right? Yet this seemingly simple word is more complex than we first imagined.

Picture a young child playing with blocks. The child uses the blocks to build a tower. As the child adds blocks to the top of the tower, it becomes less stable and eventually tumbles to the floor. At this point, the child either becomes frustrated and gives up or perseveres and tries again. If block building persists, it is highly unlikely that the child will instinctively establish the wide tower base needed for stability; prior knowledge about structures would be needed for this. You see, in young children most child-directed play involves what they already know; it is assimilative in nature (Piaget, 1962). This brings into question the widely held belief that children must be learning if they are playing. Perhaps, but how can they learn new, more challenging concepts by using knowledge and skills they already possess?

To distinguish regular play from educational play, The Council of Ministers of Education, Canada (CMEC) uses the term “play-based learning,” which is “intentional” and “purposeful” play (CMEC, 2012). Play-based learning is seen as different from regular play because it has specific learning objectives, requiring educators to structure the learning within play. There are three main ways educators can structure play to promote new learning:

There is growing awareness of the importance of developing strong early math skills in young children. Not only is math learning cumulative, but early math skills predict future math and academic achievement (Duncan et al., 2007). However, many primary teachers and early childhood educators lack knowledge about early math education and development (Youmans et al., 2018), do not feel comfortable teaching math (Germeroth & Sarama, 2017), and may be afraid to interfere in children’s play (Pyle & Danniels, 2016). There is clearly a need for early math-focused training that is tailored to suit the needs of classroom educators.

Children’s spontaneous play can involve explicit math content, like numbers and patterns. However, it is unlikely that new math learning will occur without intentional instruction. To support early math development, educators of young children need to plan for and prioritize math learning (Ginsburg et al., 2008). This can be done by “mathematizing” the learning environment with playful materials, tools, and activities that support math understanding (Clements & Sarama, 2013). Ultimately, structured play is ideal for building a solid early math foundation because it capitalizes on children’s natural curiosity, while incorporating targeted learning objectives. Educators can effectively promote early math learning by structuring math play in three key ways:

1. Use playful math tasks to introduce vocabulary and ideas. One of the most important steps educators can take to mathematize play is to introduce materials and tools that promote mathematical understanding (e.g. pattern blocks, pentominoes, relational rods, linking cubes, number paths, tens frames). After students have a chance to explore a material, educators should present a playful task and engage in meaningful interactions with their students (e.g. encourage the use of math vocabulary, ask questions that prompt student thinking and help them communicate their understanding). 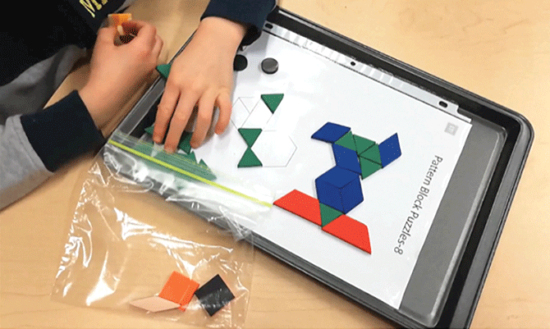 For example, pattern block puzzles (shown above) can be used to build children’s visualization skills and geometric understanding. In this playful task, students are asked to match pattern blocks with their shape outlines, as educators model the use of geometric vocabulary (vertices, sides, rotation, shape names) and discuss strategies students use for matching pattern blocks with the appropriate outlines (shape discrimination and rotation). To extend learning, pattern block puzzles that require multiple shapes (two or more) to fit into one space can be used. 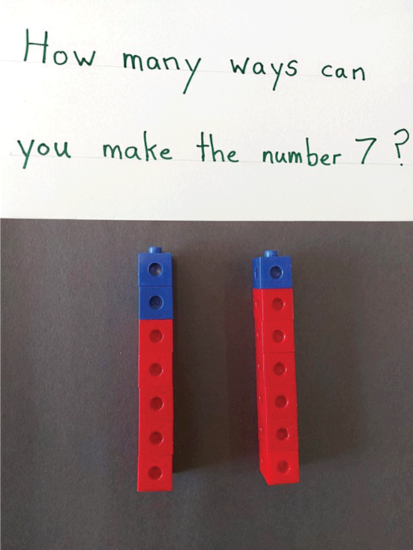 3. Use structured math activities and games to promote automaticity. The more frequently young students engage with structured math activities and games, the more automatic their early math skills become. The activity of having students match quantity cards (pictures of small sets of objects represented as dots, fingers, frames, etc., shown right) with their corresponding numbers helps promote numerical knowledge. Dice games help students learn to subitize numbers (recognize the number of items in a group without counting), and playing dominoes can support student learning of basic addition facts. Moreover, using activities and games to promote automaticity in math is a great alternative to “drill and kill” worksheets that tend to leave students feeling unsuccessful and demotivated. 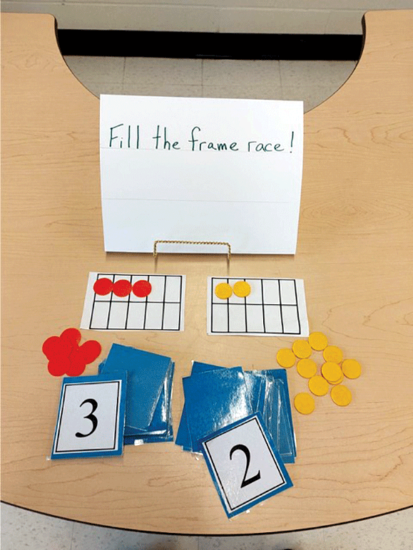 There is little doubt that early mathematics plays a critical role in promoting future math and school success. At the same time, many Kindergarten teachers and early childhood educators are ill-equipped to teach mathematics and are, understandably, uncomfortable with doing so. Structured math play is ideal for supporting early math learning because it promotes student engagement and targets important foundational skills.

All other photos: Courtesy of the authors

For more information about ways to incorporate structured math play in preschools and Kindergarten classrooms, visit these websites:

Alexandra (Sandy) Youmans, PhD, OCT, is Adjunct Assistant Professor of Elementary Mathematics at the Faculty of Education, Queen’s University. She is a former Kindergarten teacher and the co-lead of the Critical Transitions in Early Math Community of Practice through the Math Knowledge Network.