Are students just “doing school” or are they engaged with their studies? How does student engagement influence learning, achievement, and teaching? Since 2007, the Canadian Education Association’s (CEA) initiative on student engagement, What did you do in school today?, has shed light on such questions through survey results from over 60,000 students in 18 school districts across Canada.

Are students just “doing school” or are they engaged with their studies? How does student engagement influence learning, achievement, and teaching? Since 2007, the Canadian Education Association’s (CEA) initiative on student engagement, What did you do in school today?, has shed light on such questions through survey results from over 60,000 students in 18 school districts across Canada. 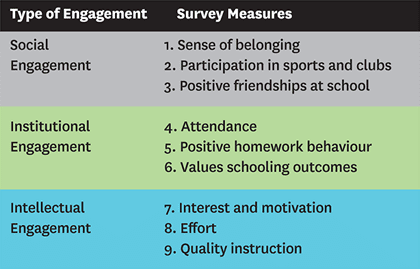 The latest series of What did you do in school today? reports focus on academic outcomes, instructional challenge, and intellectual engagement.

Report One: The Relationship Between Student Engagement and Academic Outcomes

The first report, by Jodene Dunleavy, J. Douglas Willms, Penny Milton, and Sharon Friesen, examines the relationship between nine measures of student engagement and their impact on students’ marks in Language Arts, Science, and Mathematics.

Findings suggest that a strong relationship exists between a student’s marks in these subjects and the completion of homework, level of attendance, and effort put into doing well in class. By contrast, interest and motivation has among the weakest relationship to outcomes in all three subjects.

These results – in particular, the low correlation of interest and motivation with grades – raise questions around the current model of marks-based assessment and its impact on student learning. A case study is used to illustrate how current marking schemes focus on attitudes and behaviour, rather than evidence of learning. Practices that emphasize institutional engagement can deter from the promotion of intellectual engagement in the classroom. The authors invite educators to think critically about the impact of marking practices on student learning, student engagement, and teaching.

Report Two: The Relationship Between Instructional Challenge and Student Engagement

The second report, by J. Douglas Willms and Sharon Friesen, examines the relationship between instructional challenge (the balance between students’ skill and the difficulty of their work) and the nine measures of student engagement. Findings suggest instruction is adequately matched for most students’ skills, but remains poorly matched for many other students. For example, in Language Arts, about half of students surveyed were classified as having high skills matched with equally challenging work, meaning they are likely to feel interested and successful in the subject. Conversely, about a third were seen to have high skills but unchallenging work. High-skilled students who felt unchallenged by their work reported that they were less motivated to do well than peers whose skills were adequately challenged. Low-skilled students were also at risk of being either over- or under-challenged. (See Figure 2.) 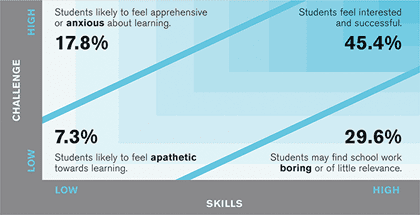 In Mathematics and Science a similar trend exists. In the featured case study, intellectual engagement was increased through collaborative activities between, and among, teachers and students.

The final report, by Jodene Dunleavy, Penny Milton, and J. Douglas Willms, revisits findings from the What did you do in school today? initiative’s First National Report (2009). Three years later, intellectual engagement levels in many schools have improved, with a statistically significant increase occurring in Mathematics and Language Arts. A strong relationship exists between students’ high expectations for success and positive teacher/student relations, and increases in intellectual engagement.

Improvements have not occurred uniformly, however. Middle schools made the greatest gains in intellectual engagement. By contrast, no gains were found in Grades 11 and 12. (See Figure 3).

Figure 3. – Average Annual Increase in the Percentage of Intellectually Engaged Students, by Grade: 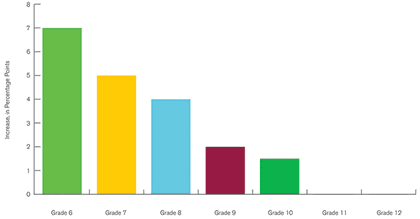 A case study illustrates how collaboration among teachers and with students raised levels of intellectual engagement. In light of these findings, the authors call for greater knowledge exchange on what has and hasn’t worked – along with greater transparency in school and classroom practices.

Find out more. To download the complete reports and for more information, please visit: www.cea-ace.ca/wdydist.

All graphs and charts reproduced from the What did you do in school today? 2012 reports, with permission.