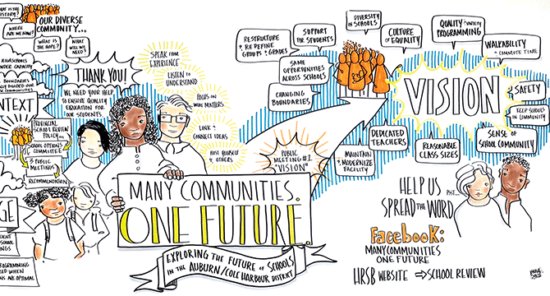 When the governing members of the Halifax Regional School Board met on the evening of September 28th, 2016, there was standing room only.

The room was jammed with parents, media and community members. A group of teachers were sitting, united, on one side of the room, wearing the concern on their faces as prominently as they were wearing their school crests on their shirts. At issue: a decision on whether to move forward, over the next six to eight months, with a review of 17 different schools, representing all educational levels and a wide variety of communities.

The tension in the room was palpable.

Very few issues in education create such an emotional response as the reviewing of a school for possible closure. Although there are several reasons why such a review could take place, the words “School Review Process” often elicit reactions of fear and loathing in parents, teachers, and community members alike. In small communities, the decision to close a school is often seen as a final death knell in the life of the town.

Here on Canada’s East Coast, we suffer from the same demographic and economic woes that plague many rural jurisdictions: outmigration, low immigration, aging infrastructure and a struggling economy. All these issues and many more make sustaining current levels of service not only challenging but, in some cases, virtually impossible. And, indeed, one of the common maladies associated with these modern afflictions is the necessity to look long and hard at the use of public buildings. Schools that are not operating at full capacity become the norm, not the exception, and unfortunately, do not become much cheaper to run.

School reviews in Nova Scotia have a rather storied history. In 1994, the Minister of Education at the time, John MacEachern, was given authority by the Liberal government to regulate the process for reviewing schools. Under MacEachern, school boards were given the power to make final decisions about school closures. For almost two decades thereafter, efforts were made to standardize timelines, to formalize the information used in decision-making, and perhaps most importantly, to include School Advisory Councils in the process.

In 2013, the process underwent a fairly significant review again in response to concerns being raised by a variety of stakeholders. The government of the day struck a committee to develop a new school review process and, armed with a discussion paper and a mandate for change, the committee traveled the province holding a series of town hall meetings. The intent was to engage parents, school boards, communities and municipalities in discussing the shortcomings of the process as it existed and to garner ideas for improvements and change. The following spring, the Nova Scotia Minister of Education announced a new School Review Policy.

This new policy included some rather distinct new elements. For example, school board staff would now be required to publish a collection of standard facts and figures in order to provide a broad picture of the school district as well as an overview of all the schools within the jurisdiction. Labelled the Long-Range Outlook, this data set would anchor school review mandates and guide problem solving and decision-making. Perhaps even more significant was the requirement for a School Options Committee (SOC), comprised principally of School Advisory Council members, and others as needed, to lead the review.

It is really in the SOC where the beauty of this process lies.

The SOC is guided by a mandate from the governing school board. They are provided with an external facilitator and focus on hearing from the community on how best to solve the problem described in their mandate. They actively engage the community to participate in generating solutions. Voices are heard and ideas are nurtured, finally shaping the recommendations advanced in the SOC’s final report.

A new approach to public engagement

That the addition of the SOC has positively impacted the process was very clearly on display at another meeting, this one held on a cold night in January of 2017 at a local community center in Cole Harbour, Nova Scotia. This was the first in a series of three public engagement sessions set up to allow local stakeholders to have their say on the future of their schools. The meeting room itself was certainly no less crowded than the school board office had been the previous September. Indeed, the 250 copies of the handouts that had been prepared proved to be about 100 shy. However, where before there had been a sense of worry and concern, there was now a sense of engagement and, to some extent, hope.

When one envisions a traditional “town hall” meeting, some fairly stereotypical images come to mind. However, this meeting felt a great deal more like a professional development session than it did a town hall. The room was filled with tables instead of chairs, where people were invited to sit and face each other rather than face a panel on a stage. It was set up for learning and participation, rather than accusation and conflict. On each table, a pile of markers and a fresh sheet of white chart paper awaited community members who were invited to write, express or even draw their ideas. Finally, there was a conspicuous absence of microphones for people to step up and express their concerns. Indeed, the only microphone in the room was in the hands of the facilitator. More voices would be heard, but clearly in a different way.

The opening of the meeting did wax somewhat familiar, when the facts of the issue were laid bare by social worker turned part-time facilitator Robert Wright for everyone to see. Of the 17 schools in question, a full 15 of them were operating under capacity, and some tough decisions indeed would have to be made. However, instead of focusing on the negative side of the issue, the audience was challenged to help develop beliefs and priorities to guide their future focus on solutions. In the words of SOC member Corrie Anderson, it was hoped that the process would be viewed as “an amazing opportunity for us to have influence and be part of the change.”

Before long, participant-focused work got underway, reminding one of a rather well thought-out lesson plan. Facilitators asked the crowd to contemplate three questions for approximately 20 minutes each, and to record their thoughts on the chart paper at their tables. To open dialogue, participants considered their current experience with schools – what they thought was working well and what could be improved. Next, the tables were asked to consider what vision they had for the future of schools within their community, and further, within that context, to consider what they would retain and what they would change about their current realities. Finally, the tables were asked for direct input to what they would like the SOC to consider in their preparation of scenarios for the next meeting. In answering this question, each table was given a few Post-It notes to prioritize the three important things from their discussion. They were invited to post them in the front of the room, as organizers grouped the many brightly coloured sticky notes into themes.

Each of these questions resulted in animated but tremendously respectful discussion throughout the room. Facilitators encouraged participants to move from table to table, and to exchange ideas with people from other school communities. This particular exchange is another unique facet of this approach, as conversations never turned to “my school versus your school” or “our community versus yours.” Instead, people from different communities shared visions of what they believed, what they valued, and how they could move forward as a group.

As one can well imagine, a room with more than 300 passionate and engaged community members – from students to grandparents – all sharing their ideas around such all-encompassing questions, creates an air of chaos. However, it is from within this chaos that common ideas emerged. Many of the gathered community members, despite their diverse makeup, almost organically shared many of the same priorities. Walkable schools, safety, programming, student learning all were echoed in many conversations. And it was the emergence of these key themes that seemed to reinforce the similarities between the school communities and even, to some extent, strengthen those bonds. Everyone at the meeting wanted the same things for their children, and hearing that message from many communities seemed to help the entire group recognize the magnitude of the task set before the SOC. As the discussion moved to a review of the emergent themes, the voices of the group resonated visually on the wall in front of the crowd, where ideas captured from the tables were prominently displayed and categorized.

As the evening wrapped up, in place of fear and concern, the room emanated a sense of hope. By the end of the evening, everyone felt like they had, in many ways, had their opportunity to express their views in a way that “stepping up to the microphone” simply would not have allowed. One parent, Roberta Hupman, said,

“It’s amazing to see how many people have shown up tonight… we’ve got an engaged community here, and… I’m happy to be participating in a very healthy discussion about the future of our schools. I didn’t really know what to expect, to be honest; I knew it wasn’t going to be the lining up at a microphone and yelling, but what certainly is exceeding my expectations is our ability to have some real input into the process.”

Whatever the outcome, when it comes to closing schools, communities must know that they have, at the very least, been genuinely engaged to make a difference. In Halifax, where this new process has been completed twice (and is currently underway once again), the Governing Board has solidly endorsed both recommendations from SOCs. Perhaps this is proof of a real change toward engaging communities in practices of deep democracy – engaging people in meaningful ways around issues they can actually impact, and nurturing participants to contribute honestly and meaningfully to real issues that affect them.

Inevitably, some schools are unsustainable and must be closed. However, by using this SOC process, the sense that these decisions are predetermined long before public consultations even begin is diminished. What this process does is create an authentic device for public input, and ideally, a way for all the stakeholders to feel like alternatives have at least been considered.

Reviewing schools for closure has become one of the most unenviable tasks for school boards clear across our country. However, under Nova Scotia’s school review process, there is an opportunity for communities to not only have their voices heard, but to collectively and collaboratively look for solutions. While it is unfortunate to have to consider the closure of schools in changing communities, it is reassuring to have a change process that engages those communities in moving forward together, as opposed to driving them further apart.

Grant Frost is an author and educational commentator who has been working in public education for over 25 years. More of his commentary can be found at: www.frostededucation.com.

Elwin LeRoux is a former classroom teacher, school administrator, and administrative supervisor. He is currently serving as Superintendent of the Halifax Regional School Board.