by: In Nova Scotia, a Mi’kmaw Model for First Nation Education

In 1999, Mi’kmaw communities in Nova Scotia won control over the education of their children for the first time in a century. The Mi’kmaw Education Act became Canadian law two years after a signed agreement by the federal and Nova Scotia governments and chiefs of nine (later 11) of 13 Mi’kmaw communities that recognizes local decisions on education, including language, history, identity, and customs in the regular curriculum.

Today, though funding is still an issue, the legal arrangement that governs the schooling of about 3,000 Mi’kmaw students in Nova Scotia is winning national attention as a possible model for First Nation self-governance in education.

What’s driving interest in the Nova Scotia model is the work over the last two decades by Mi’kmaw Kina’matnewey, the education authority that distributes $40-million a year in federal grants to its member communities – and the effort of the local communities themselves. Significantly, the tripartite agreement recognizes the role of the education authority to support local band schools in delivering language immersion and other culturally rich programs and activities. With Mi’kmaw-focused teaching pedagogy, schools seek to engage students in a successful education experience. In 2010-11, Mi’kmaw Kina’matnewey reported a high school graduation rate of 75 percent for students in the system, up from 70 percent two years earlier and almost on par with Nova Scotia as a whole.

“What impressed us most were the outcomes,” says Scott Haldane, chair of the National Panel on First Nation Elementary and Secondary Education for Students On Reserve. The 75 percent graduation rate, he observes, “is double the national average and close to triple the average of what we saw in some of the worst performing schools.”

“The accountability in the MK (Mi’kmaw Kina’matnewey) system is that MK is accountable for helping the schools but in the provincial system the schools are accountable to the school board,” says Jeff Orr, Dean of the Faculty of Education at St. Francis Xavier University in Antigonish, Nova Scotia. Emphasizing the “collective consciousness” that defines the interaction between Mi’kmaw Kina’matnewey and its members, he says “if we trust people are helping us we are more likely to seek out their support. The cultural, sociological and political hope of MK is that it is able to cultivate that trust and therefore able to operate in supporting schools [in ways] that are fundamentally different from the provincial system.”

If we trust people are helping us we are more likely to seek out their support.

Nurturing a new generation of Mi’kmaw teachers – who account for about 50 percent of those teaching in Mi’kmaw schools – has been a key goal of Mi’kmaw Kina’matnewey. Since 1995, in a collaborative effort between the education authority and the education faculty, more than 100 Mi’kmaw-speaking students have earned their bachelor of education. “That is because of the relentlessness of our relationship over the period of time,” reflects Prof. Orr, emphasizing the strong rapport between his institution and Mi’kmaw Kina’matnewey, whose representatives serve on an advisory body to the faculty. As well, his education faculty delivers on-reserve programming for students to complete their teaching degree on a part-time basis or earn a certificate in Mi’kmaw language pedagogy.

Former teacher Eleanor Bernard, the current Director of Education for Mi’kmaw Kina’matnewey, can measure progress by her own experience. When she arrived at high school in Sydney in 1981, she was one of 160 Mi’kmaw students. By graduation, she was one of only five who received their diploma. When she started teaching 20 years ago, she estimates she was one of about 25 from Mi’kmaw communities. Today, there are more than 200 in the province. 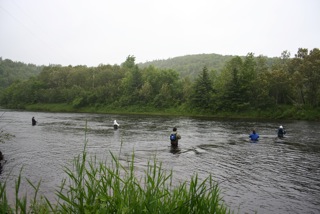 “It is amazing how far we have come in 20 years,” she says. Self- governance was an essential first step, but insufficient without community-based programming to enrich the education of Mi’kmaw children. A key initiative has been the development of language immersion programs in three communities, one offering courses through Grade 12.

While gratified by the recent attention to Mi’kmaw initiatives in Nova Scotia, Ms. Bernard is candid that significant education challenges remain on literacy, numeracy, attendance, and “capacity building” at the local level. “There is still work to be done,” she says. “There continues to be a need to bridge the gap for students in the provincial system and ours.”

Recent efforts to bridge the gap have come through partnership agreements between Mi’kmaw Kina’matnewey and the Nova Scotia department of education.

In 2007, the department and Mi’kmaw Kina’matnewey signed their first bilateral agreement on education services, replacing individual tuition agreements between the government and local bands.

“It allowed us to move forward in a way we had not done before,” says Candy Palmater, Director of the department’s Mi’kmaq Liaison Office.

Under the agreement, now being renewed, the department offers teachers in the Mi’kmaw Kina’matnewey system the same professional development provided free of charge to those in the provincial system. At the request of Mi’kmaw Kina’matnewey, concerned about school improvement, the department shared provincial tests for Grade 3, 6, and 9 so that local Mi’kmaw schools could assess the achievement of their students. The results are shared privately with participating Mi’kmaw schools.

In turn, Mi’kmaw Kina’matnewey shares its expertise in language curriculum and Mi’kmaw programming with the department. “We have worked hard at developing our relationship,” says Ms. Palmater, who is herself of Mi’kmaw descent. “As a result, we have a real sharing back and forth for the first time in a long time.”

As a bright light in an often-dark picture of aboriginal education, the Mi’kmaw self-governance model holds out hope for what is possible, says Mr. Haldane. Speaking of his national panel, he says “the conclusion we came to is that when First Nations are given the time and resources to build a system that includes school-board type supports and ministry-type supports, and when they can work closely with the provincial education system, then results seem to follow.”