I remember clearly the first time I heard the phrase Paradigm Shift. I was sitting in an after-school staff meeting and my principal had just returned from a conference, inspired by the idea that education was about to undergo a substantial re-think.

“We’re making a move”, he declared, “And our whole way of thinking about school is about to change. We’re about to undergo a paradigm shift!”

I remember clearly the first time I heard the phrase Paradigm Shift. I was sitting in an after-school staff meeting and my principal had just returned from a conference, inspired by the idea that education was about to undergo a substantial re-think.

“We’re making a move”, he declared, “And our whole way of thinking about school is about to change. We’re about to undergo a paradigm shift!”

Now, I’m the type of person who gets excited at the sight of a newly painted room, so the prospect of a renovation in the way we approach the idea of school had me giddy with anticipation.

So, that was 1990–over 20 years ago–and depending on who’s telling the story, we’re still waiting for that wholesale shift in thinking to take place. Depending on who you listen to!

Narrative shift is a literary term that is used to identify the place in a story where the character actually telling the story changes. One of the most obvious advantages of the narrative shift is the change of both perspective and sense of reality that a new voice can bring to the story. Narrative shifts remind us that there are other points of view and alternative ways of looking at the same phenomenon.

The popular grassroots energy that has emerged around the world lately provide excellent examples of how a change in who is telling the story can lead to a change in who is actually writing the story. Think about the G-20 protests, the events collectively referred to as the Arab Spring. Consider the Occupy Wallstreet movement and the other social protests that have been spawned by that idea.

In terms of education, I believe that initiatives like EdCamp and unPlugd have started to reflect the same type of potential. Still in their infancy, these movements seek to shift the type of conversations taking place around educational but, for me, they do something even more powerful: they signal a type of narrative shift in the education reform story! 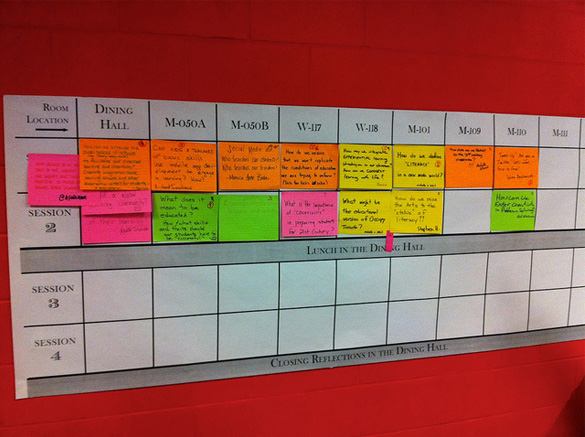 When you gather passionate and dedicated voices that have become so accustomed to being spoken to, spoken for and spoken about, then a different story begins to emerge. Parents, teachers, administrators and members of the wider community are weaving the threads of a different sort of change agenda, one that has something to say about the use of technology, the concept of literacy, 21st century learning, the power of the arts, the way that schools are constructed, the efficacy of both students and teachers, and ways to make our schools more engaging, more exciting and more viable for all.

These are not new voices in the story, but it has been a while since the telling of the story has been handed over to them. And, at this point, a full narrative shift has not taken place. What is evident from these emergent conversations, however, is that the paradigm shift for which we have longed for many years has already taken place in the hearts and minds of many of those best positioned to bring that shift to life.

These are voices that are not traditionally invited to the table but, in recent months, they are voices that have begun to build their own tables, their own conversations and their own sense of the change they would like to see. The challenge in the months and years to come is to find ways to continue the momentum created by this narrative shift. You may have your own ideas on how this might take place. Here are a few of my own:

I’m not too convinced that the call for a paradigm shift is going to have much effect on the change agenda for education. After all, 20 years has already passed since I was first introduced to that idea. But I am excited about the possibilities that exist in continuing the narrative shift that has begun in this country and across the continent!