Equity in education is a philosophical problem prompted by inequalities in student outcomes.  Most of these inequalities result from the vagaries of personal financial circumstances, ethnic background, physical and mental health and the accident of dwelling place. (Quality of instruction could be added to the list of variables but is much more elusive as a significant factor). Inequalities in some measure will always be with us. Greater equity, on the other hand, is always possible and entirely manageable.

Equity in education is a philosophical problem prompted by inequalities in student outcomes.  Most of these inequalities result from the vagaries of personal financial circumstances, ethnic background, physical and mental health and the accident of dwelling place. (Quality of instruction could be added to the list of variables but is much more elusive as a significant factor). Inequalities in some measure will always be with us. Greater equity, on the other hand, is always possible and entirely manageable.

In my lifetime many steps have been taken to ameliorate inequalities in public education – family allowances, tax credits, school lunches, free textbooks, psychological and counselling services, universal public health care, smaller classes, early childhood education, better qualified teachers, etc. Yet serious inequalities remain. The most serious, I think, is under the umbrella of age-grade achievement practices where there is lots of good will but a continuing shortage of fairness in the minds of students.

In Canada, beginning in the 1990s, heavy-handed political interventions in public education were intensified. For example, Premier Ralph Klein of Alberta set out to impose on the schools the principles and practices of private business, (i.e. success measured according to the norms of a free market economy.) Soon after, Premier Mike Harris of Ontario launched the Common Sense Revolution, which was intended (contradictorily) to reduce the cost of education and improve its outcomes.

The province, therefore, took full control of education taxation and grants as the route to greater control. Annual standardized tests in Grades 3, 6, and 9 were implemented by the Education, Quality and Accountability Office (EQAO) at an annual cost of $50 million or more. Grade 10 literacy tests as a condition of high school graduation followed.  Ever since, the listing of test results has crowded the websites and press releases of school boards with the implied claim of better instruction in the schoolhouse. Good schools are now identified partly by test results, often referred to as high stakes testing; e.g. “You’d be smart to buy that house because the neighbourhood school shows test results above the provincial standard”.

Historically, people assumed that children of privileged parents would shine at school and those of under- privileged families would languish, quit and get a job after Grade 10. So long fella!  Good luck Susie!  The computer revolution has changed all that. Technological unemployment steadily worsens the prospects for unskilled labour. Success in school is now part of the job hunt; success referring primarily to measurable competence in language, science, and mathematics. Standardized testing has become the practical means of ensuring these competencies – paired with accountability (the cold-hearted flip side of the coin). In the outcome, about a quarter of high school students fail to graduate and are adrift in the ‘Mc-job’ market. Adult education and training-on-the-job offer longer-term hope for some. 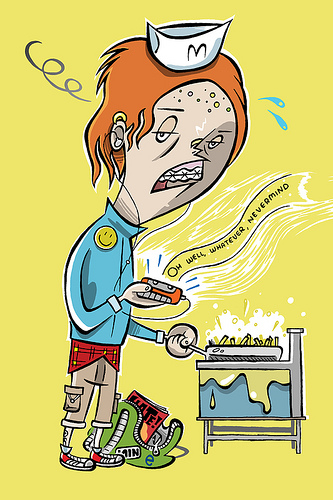 To repeat, greater equity is possible and manageable. Nations less wedded to free market economics and more attuned to humane social ethics offer encouraging signs. Take Finland for example. That country, for a time, went down the standardized testing/accountability road but has recently done a u- turn. The winds of freedom now drift through their public education: comprehensive schools for 7- to 16-year-old children that function without tracking or streaming; teachers following state curricula but choosing their own text material; verbal grading with numerical grading determined by local preference; state-wide standardized testing replaced by random testing in selected subjects. For those who think that Finland must be floundering in a morass of incompetence, take note: Finland was first in the ranking of Western industrialized nations (2009) in the PISA tests (Programme for International Student Assessment).

This is not rocket science. Digital technology has created multiple pathways of learning within a framework of equity. Monkey-see monkey-do belongs in the zoo. It is time now to move beyond the culture of successes/failures, winners/losers that has characterized schooling – as if it’s all like a football game. In the emerging school culture of greater equity the focus will be on the questions students ask rather than on the answers they are expected to give – and how those questions are answered.

Born in 1927, Peter Hennessy walked to a red brick schoolhouse where the teacher taught all the subjects to all the grades at the same time. After sailing through the eight elementary grades in four years and completing high school, he studied history/political economy at Queens University and graduated with honours in 1948.

Based on these early life experiences in the Great Depression, underlined by the horrors of WWII, set him on a mission to bring more fairness and equity into all aspects of society. From 1949 to 1968, he was a high school teacher and administrator, followed by 16 years as a professor of education at Queen’s. Officially retired since 1984, Peter has dabbled in sheep farming, writing, and prison reform. He has written six books, a slew of newspaper columns and journal articles.