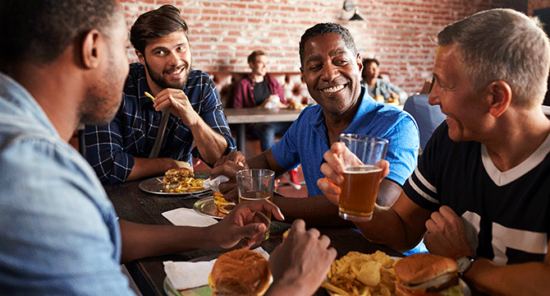 I arrive early and sit at our table by the window, looking over the menu while I wait for the others.

John and his wife just had their first baby. He announces, “I don’t think I’ll be able to come here for a few weeks. Until you bring that baby into the house, you have no idea how this turns your life upside down!”

Todd’s babies are preschoolers and his wife has gone back to work. He tells John, “It only gets busier! Now that we’re both working, someone has to buy the groceries, pick up the kids from daycare, get supper… I’m leaving here in time to read them their bedtime story. And I’ll get to my school work after they go to sleep.”

There are about ten of us, and we range from first-year teachers to retired principals. The conversation is boisterous and there is much laughter. We call ourselves “The Men’s Group,” and we’re an informal collection of men who teach.

When I became a kindergarten teacher in 1978, I was featured on the front page of the Calgary Herald. I was excited about this coverage, but no one wrote about any of the dozens of new female kindergarten teachers. Male primary teachers are noticed.

I now teach part-time at Mount Royal University and the University of Calgary. The first thing I noticed is that the gender imbalance I experienced in elementary schools continues. In every class of 25 students, there may be two or three young men. I am increasingly concerned for those men as they move into their future work world.

Men who choose to teach elementary school are both valued and vulnerable. We are valued because we offer an image of the role of men in advancing gender equality. We are men who are good with little kids, who sing songs and read story books, who play games in the gym, who show boys they don’t have to be tough, who show boys and girls that men can treat others with respect and kindness. We are vulnerable because we are men amongst young children. We are viewed as potential predators, can be targets of suspicion and we experience complex relationships with students and colleagues.

One evening my friend Todd and I got talking about this gender imbalance, and we wondered if men would come to informal occasional dinners. We invited a few friends, and now the group meets on a semi-regular basis. This is one way to support male teachers.

What do we talk about? Like any group of teachers, mostly school stuff – on this night, the report cards and interviews coming soon. Our vacation plans. The retired teachers talk about their part-time jobs. The first-year teacher just listens, looking like the proverbial deer in the headlights. I’m wishing more beginning teachers came out and I’m wondering how we can find them.

Joshua mentions he serves in the reserves.

“Whaa? You teach Grade 3 and you’re in the military?” For some reason the juxtaposition strikes us as funny.

“The kids love it!” he says. “I wear my uniform for Remembrance Day and tell them about my other job.”

“And do they always give you the difficult boys?”

“Yeah they do, actually.” Joshua shrugs. “I don’t usually have too many problems with them.”

Brian, a Grade 4 teacher, adds, “The principal always gives me the difficult boys. And I’m not a military guy, I’m a kinda quiet guy. I want to say, why can’t the other teachers take him?”

“And the moms request me.” More laughter around the table.

After two hours, sometimes three, we pay our bills and head home. It’s that simple.

For those thinking of starting a men’s group, I have some suggestions. Start small, by calling a handful of men you know. Arrange a time and place – dinner in a pub is better than meeting in a school – and ask each man to invite a guest. Don’t worry about the size of the group; many evenings we are a group of four, and the conversations are often richer with a small number. Start an email list at the first meeting.